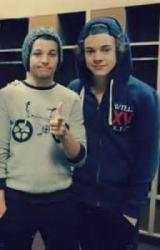 A day off. No classes. No internship. Fucking finally. Nothing in the world could spoil Harrys mood right now. Not the empty banana bowl in the kitchen, not the persistent throbbing in his lower back caused by slaving over a stack of pro bono cases in a dusty research room, not the lack of Louis for another two hours. Well, maybe the last bit. He stared down at the shower drain as hot water pounded against his tense muscles, sluiced down his half-hard cock. Definitely the last bit. He propped his forearm against the tiled wall and rested his forehead against it. He could make it through another hour. He could. Even though theyd skipped morning blowjobs because both of them had slept through Louis alarm clock. He bit down on his arm to center himself and shut the water off, shook it out of his hair like a dog. If Louis was here with him, hed have darted out of the way with a squeal, then deny hed ever made such a sound. Was it normal to still be so infatuated with ones future spouse 363 days after their first kiss? Not that Harry was counting or anything. Hed just always been a natural with numbers, all right? All right. He walked out of the bathroom, naked save for the fluffy towel wrapped around his head and dripping water all over the bedroom floor. He bent down to pick up a trail of haphazardly discarded clothing, which Louis had chucked there in a mad search to get dressed in the morning, and threw them in the hamper. For a moment he just stood there and smiled. Louis was all his.