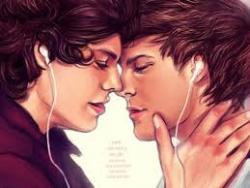 Gorgon City - Here For You

HERE FOR YOU
Part 0

Mum: Hi darling, mummy here, just checking in to see how youre doing. Hope all is well in London town, tell all the gang we say hello! While Im here I may as well ask if you & the boyf want to come up to Donny and pay us all a little visit over Easter break? I know its short notice but please say yes Lou, I would love to meet the lovely boy making you so happy recently. Lots and lots of love and hopefully see you soon xxxx

After that fateful conversation with his mum, Louis had sat himself down and decided on his plan of action. It consisted mainly of the word `Shit´, but he had eventually decided on letting his mum believe he was in this wonderful burgeoning relationship for a week more at most. That would keep her happy and off his back, at least. Unfortunately, like most of his well laid plans (and well, the majority of his life choices really), that didnt really work out for him. Instead, what he got was his mum texting him almost everyday, asking stupid questions about his fantasy boyfriend, and he was fast running out of polite ways to say `please stop asking me questions about this please please please´. Eventually, he started giving out the vaguest of details, just to placate his very persistent mother. To her, `So what does he do for a living??´ question, he had replied, `A bit of this and a bit of that, goes in and out of jobs bit like me x´ and to her `Any brothers and sisters then? :-)´ he had replied, `I've never asked him lol. bad boyfriend, me. we like to talk about all the girls and Ernie most of the time x´ because he knew the mention of his siblings would throw him mum onto a completely different track, and sure enough, she had started gushing about how big Ernest and Doris had gotten and how she wished Louis could see them more often. Louis would have given himself a pat on the back at how well he could read his mum, but he was too busy being shit scared of fucking up, so. It had carried on. Louis fed his mum the tiniest, vaguest details and yet still managed to build up some semblance of a boyfriend that she seemed happy with and that was the thing. She was so happy. So, so utterly delighted that Louis had seemed to find himself someone stable and that he seemed content with, that Louis couldnt bring himself to tell her the truth, or even that he and this mystery boyfriend had broken up, no matter how many times he tried to convince himself it was the right thing to do and yes, thank you, he knows thats a fucked up way to look at things, but honestly, when had the whole thing even come anywhere remotely close to not being fucked up.

So now, its back to a mildly hungover, very firmly still-in-disbelief Louis, sitting on his shitty leather sofa in his tiny living room and staring blankly into the distance, mind running over who exactly was in charge of letting him do anything ever. Louis taps the screen of his phone to bring it back to life and decides to check just one last time if the message is actually real and not something he dreamt up in his hangover haze, and nope. The message is definitely real and definitely scaring him shitless. He drags a hand through his already messy hair, closes his eyes and leans even further back into the sofa, groaning out a,
Zaynnnnn, before bringing his knees back up underneath his chin. As predicted, Zayn appears almost immediately, still in his boxers and beanie but this time, instead of a cigarette dangling from his mouth, hes got his toothbrush and a mouth full of foamy toothpaste.
What is it now, Zayn slurs around the brush, looking very pissed off having been interrupted during his precious dental hygiene routine.
Youre actually not even going to believe whats happened, to be honest, Louis answers, hands covering his face. Hed decided to let Zayn in on his grand pretending-to-have-a-boyfriend plan about two days after it happened, because a) Louis has never been any good at keeping secrets, especially from Zayn, and b) he was struggling to come up with good answers to his mums questions that would keep her suspicions down and really, he needed a bit of a hand. When hed told him, Zayn had first stared at him for about a minute in complete and utter disbelief that someone could be so stupid (and Louis didnt really blame him), before bursting into a fit of laughter. So, really, hed taken it better than Louis had expected and if Louis had thought telling Zayn would have resulted in useful avoidance-type answers to throw his mum off the scent, he was sadly mistaken.
Tell her that hes a secret service agent and that for legal reasons you cant reveal his name, like, upon pain of death. Actually, thatd be quite sick, was one of his helpful suggestions, with another being, Tell her that hes a notorious serial killer whos on the run, and you know that getting into a relationship with him is a mistake but you just cant help how you feel, that came to him while they were sat watching Crime watch at home one Wednesday night. So technically, Louis wasnt facing the mammoth task of convincing his mum that he was seeing a completely made-up human being alone, but for all the good Zayn was doing, it certainly felt like he was.
Whats happened, then? Zayn interrupts Louis train of thought, removing the toothbrush from his mouth and placing one hand on his bony hip, looking thoroughly disgruntled. Need me to lift you from the sofa to the bathroom? Lost all power in your arms and legs?
No, Louis whispers from his cocoon on the couch, Not exactly.
Well what then, for fucks sake Lou, Zayn says, sounding exasperated. Havent got all day, spit it out.
Just got a text from my mum, Louis replies, just as quietly. Zayn snorts and says,
That's it? Whats she want to know now? Mystery mans blood type?
Nope, is all Louis can muster, before holding out his phone in Zayns general direction and waiting for him to take it from him.
Lou, youre actually freaking me out now. What the fucks going on? Zayn says worriedly, advancing towards Louis and grabbing the phone from his hand, before proceeding to read the message still open on the screen.
Oh, is all Zayn manages after about fifteen seconds of reading. Well. Thats, um, not good.
Ha, Louis laughs flatly. No. Not really. Zayn gives the text another read.
Whatre you gonna tell her?
Dunno, to be honest, Louis answers, still staring into space. Suddenly, an idea hits him. A really, really stupid idea, but an idea nonetheless. He lifts himself up off the sofa and shoots his best pleading look in Zayns direction.
Zaynie, how would you feel about-
No.
But you didnt even-
No, Louis. No way.
But she already kind of thinks theres something-
I said no, Louis, Zayn says, sounding very serious. Dont make the situation worse than it already is. Come up with some kind of excuse not to go, text her and end this stupid thing before it gets out of control, okay?
Okay. Yeah. Youre right. Ill sort it out, Louis nods determinedly, standing up and stretching. Time sit?
Twenty to eight, Zayn informs him. Go shower and get dressed or youre gonna be late for work. As he makes his way to his bedroom to grab a towel, Louis resolves to have this situation sorted by the end of the day. He just needs to come up with a plan of action, get rid of this hangover and clear his head, and he should be boyfriend-free by this evening.