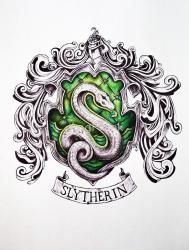 Alison Ridley Ives
"Ridley, we're going to miss our train" called Theo, my twin brother. "I'll be down in a second". I lifted my suitcase and headed downstairs were my siblings were waiting. I held my suitcase tied and apparated to platform 9 3/4. "I told you we would be late" said my brother to our older sister Audrey. "It's not the end of the world Theo" I told him while we were boarding the train. Audrey managed to find us an empty compartment. "Tell me sister, how is the Slytherin quidditch team". "Well, they lost the last game but they're pretty good. You should definitely try out when you're old enough Rid" told Audrey. "I'm going to try out to" stated Theo.
Time passed by and we arrived at Hogwarts. "You two have to go with the other first years so I'll see you guys later" Audrey said while pushing us towards a giant man. Hagrid, the giant man, led us to the Great Lake were small boats were waiting for us. The castle came in sight and looked magnificent. As soon as we set foot on land a women, professor McGonagall, led us the castle. While we were waiting to enter great hall, a boy began to spoke. "Is it true than, what they were saying on the train". All heads turned towards the boy. "Harry Potter has come to Hogwarts". People started to whisper. "This is Crabbe and Goyle, and I'm Malfoy, Draco Malfoy". A red haired boy, most likely a Weasley, giggled. "You think my name is funny do you, don't have to ask yours, red hair and a hand me down robe, you must be a Weasley" said Malfoy. He turned back to Potter. "You'll soon find out some wizarding families are better than others, Potter. You don't want to go make friends with the wrong sort. I can help you there". Malfoy offered his hand. Potter didn't take it. "I think I can tell the wrong sort myself, thanks" answered Potter. McGonagall came back and told us they were ready for us. After what seemed to be an eternity, my brothers name echoed through the hall. "James Theodore Ives". The sorting hat was mumbling al sorts of things before it shouted "Slytherin". My name followed. "Alison Ridley Ives". I walked up to the seat and waited for the hat to shout Slytherin. The hat was mumbling, I couldn't hear what exactly it was saying until it shouted loud and clear "Slytherin".