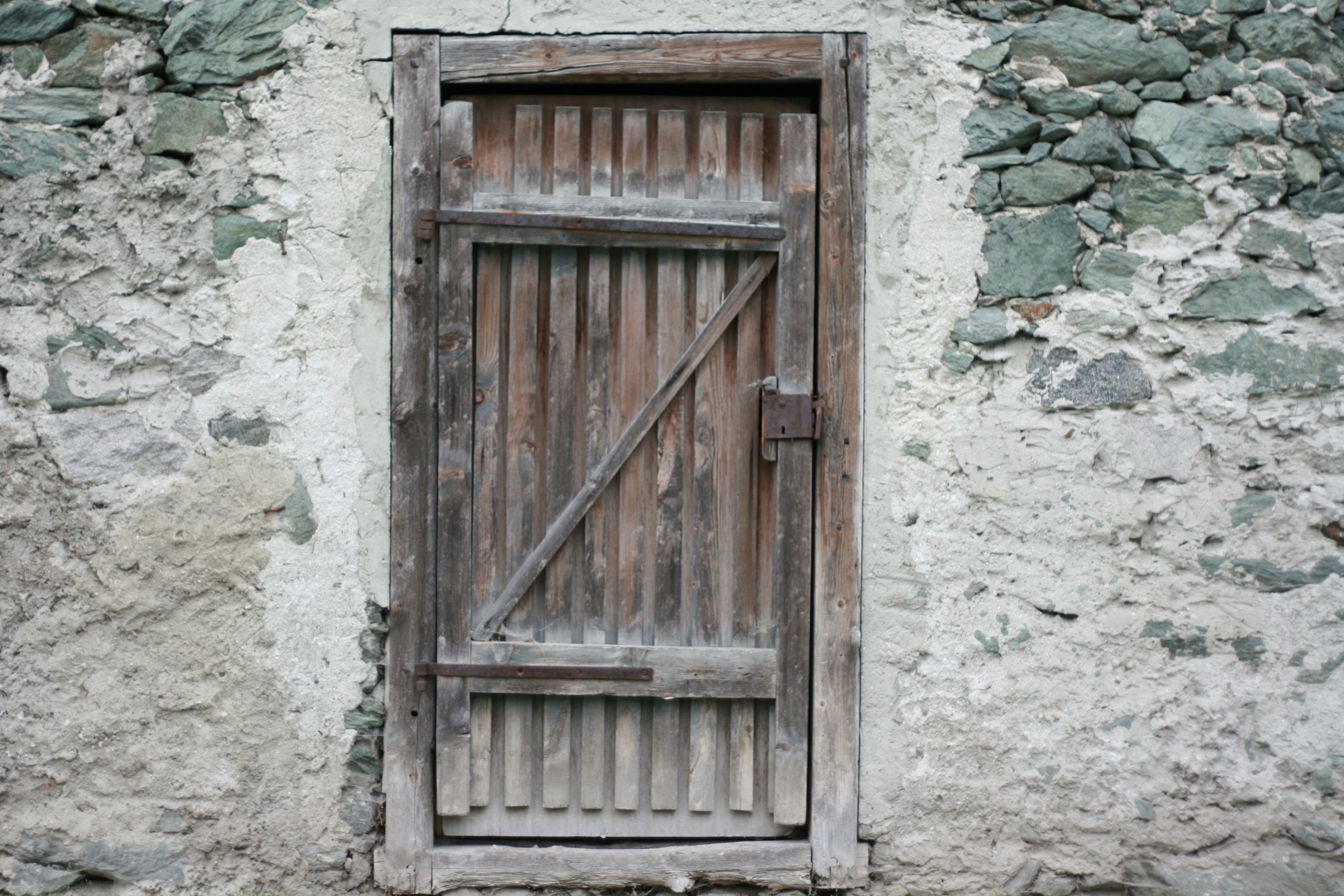 Sasha opened her closet with a yawn. She had barely slept 2 hours. She began to get sick of her job. Couldnt they have given her anything else to do but being a door?
Yeah, thats right, Sasha was the door to the ramshackle house of Elijah. She began to hate it. Always scaring people of was fun and all but eventually it got boring.
After Sasha got ready, she started walking in the direction of Elijahs house. Great, she thought. Another day, another route she had to walk. It was unsafe if she walked the same path to his house every single day. It was better to have about five routes and that each day of the week she chose another one.
After about 15 minutes, Sasha finally stopped in front of the house. Now of course, without a door. That was her job. But before she began at her duty she always had to check in with Elijah. That was also part of her job.
As part of being a door you could go in and outside of house. So, thats what she did. After walking in to the front wall, Sasha found herself in the middle of the room. All furniture had been removed from it, as Sasha had to help with doing that yesterday. She had no idea what Elijah wanted but obviously, she didnt really care. Yesterday, Elijah gave her orders to let just two people. A tall man with muscular arms and a face that had been through a lot, and a girl. The girl, of course, was Aliyah. Described as a stubborn looking young lady with wavy brown hair a little over her shoulders. Sasha let them in. but it wasnt her duty to let them out. That was Elijahs job to arrange. He usually put them to sleep and magically made them appear in their beds as if it was a dream. It was a power Sasha was jealous of. She had always wanted to be able to do something like that. And especially she would do it with herself.
Sasha had problems with sleeping but she always was found in her bed. She didnt really have anything else to do. She was a half-breed, well actually more like three-fourth-breed, but the part of her human form did not allow food into her body. It was something Sasha wasnt happy about. She thought human food was delicious and if she wanted to lead a normal life as human, the door part of her would always be in the way. Literally and figuratively speaking.
But now she was back at Elijahs, the other thing that stopped her from having a normal life. The normal sight of a giant wolf didnt scare Sasha anymore. On the contrary, Sasha liked the view over the wolf more than him in his human form.
It was still dark in the room so Sasha clipped her fingers and the lantern was lit. the room filled with light and Sasha saw the wolf laying in a corner.
you really do know how to make yourself comfortable, said Sasha.
The wolf put up an innocent looking face which Sasha recognized as the guiltiest looking face ever.
Dont try me. Shall I be the door now? Sasha already turned around to take her place but was stopped by the whoosh of the transformation between wolf and human of Elijah.
No, I need you to do something for me. You can act like a normal human, right? Sasha nodded, Good. I want you to keep an eye out for Aliyah. Im not expecting anyone today so you can go off.
Sasha was speechless. Elijah wasnt usually this kind to her and now that he gave her the day of, even with a task, meant a lot coming from him.
Sasha shrugged and walked towards the wall to exit the building. After seeing the daylight again, she had to blink a few times.
The light reminded Sasha to the prophesy. The one who controls the light will have the power to defeat the darkness. All so poetic but most half and quarter breeds usually believed in these predictions. Not Sasha. She was one of the few who thought it was all just some ramble about light and dark. Her theory was if you needed to defeat the darkness to just light a candle. Why dont grownups think logical?

Aliyah walked towards school. It was a sunny Wednesday afternoon and Aliyah had a meeting with the student council. She enjoyed the bright sun on her face. She barely noticed the people passing her. Only a few of the faces she could later describe but they werent of importance.
Suddenly Aliyah snapped out of her enjoying stage when a short girl stopped beside her. She was panting like she had run the New York marathon. But Aliyah was smart and she knew that this girl had to deliver something of importance.
Can I help you? asked Aliyah, Do you maybe want some water?
But the girl shook her head. She grabbed on to Aliyahs shoulders and still panting tried to tell her story.
you have to get out of here! The girl wouldve dropped to the ground if it wasnt for Aliyah who held on to her.
Aliyah felt bad for the girl. She obviously had something to do and she spent valuable time by talking to her. Aliyah tried to think about the warning that the girl had given her but the coin dropped a little too late.
A tall, muscular man with scars all over his face, pulled the girl away from Aliyah and threw her against a wall. If he had thrown her one foot to the right, the girl wouldve broken a window and probably suffer sever glass wound injuries. Luckily, she only hit the wall.
The man walked towards Aliyah and grabbed her by the arm.
Youre coming with me, whether you like it or not. Aliyah was confused but she had to help the girl who was trying to get up, but was pushed back by a busty woman. Aliyah kept trying to release herself from the firm grip that held on to her wrist. She tried to think clear but it was hard. She was so fixated on getting released from the man that she didnt notice that the girl had released herself from the woman. She hit her on the top of her skull with the bolster of a small dagger she hid in her boot. The woman fell to the ground unconscious. Then the girl went to Aliyah and tried to attack the man with her dagger. She could stab him in his leg. The man fell with a scream of pain and tried to get back up. But it was too late. Aliyah and the girl had already run off. After sprinting fifty feet, Aliyah thought it was safe to look over her shoulder to see what was going on. But she didnt see anyone. The man probably dragged the women in an alleyway.
After turning the corner, out of sight of any of their two attackers, they gave themselves some time to catch their breath. Aliyah looked over her shoulder again to see if anyone was there, but the coast was clear. After about two minutes, Aliyah finally got the courage to ask something to the girl.
Why do you think they attacked us? And probably more importantly, are you okay? she asked.
Im fine, the girl laughed, My name is Sasha by the way.
Aliyah was amazed. This girl just handled the situation like it was an everyday event. After all, Aliyah was still trembling all over. Sasha noticed it and gave a reassuring pat on the back.
Dont worry. Im here and there is nothing better than my company!
Sasha smiled. She knew that there was something a whole lot bigger than this going on and that she had to tell Aliyah but now was not the right time. Sasha walked with Aliyah until they reached Aliyahs house. All this time, Sasha was telling very comforting stories and Aliyah felt like she found someone with a similar character as her. She enjoyed Sasha but was still thinking about everything that happened.
But yeah, I feel like Im not really going to fit in. Sasha had been talking about her parents, who decided to move here for a better live. Of course, Sasha would then have to go to Cole Stone Junior High, the same school as Aliyahs.
I doubt it. You seem like someone who can easily fit in, no matter where! And otherwise you can come sit with me and my friends, Im sure they wont mind it.
Sasha was already partying on the inside. Elijah gave her the job to keep an eye out for Aliyah and this offer made that much easier than looking like a crazy stalker. And besides, Sasha really liked Aliyah and thought they could become great friends. Even though Sasha was three quarters door and one quarter human, she sensed that Aliyah was not completely human either and it would make for a pretty complicated situation with Teagus members on their tail. She recognized the woman immediately, the tattoo on her wrist gave it all away. It was in the shape of a large lizard wrapped around a ball-like shape. The man though, stayed in the unfamiliar section of Sashas brain.
Either way, this encounter would cause for some troubles and Sasha thought it was best to keep a little more than just her eye out. Aliyah was of course just thinking of someone trying to steal her money. Or someone who was trying to kidnap her for ransom. But this encounter, Sasha knew, meant Aliyah was in life danger. There was something dark going on without anyone but a handful of people knowing about it. And it was most importantly that that stayed that way. If anyone figured out what would happen, who knows what Teagus next move would be.