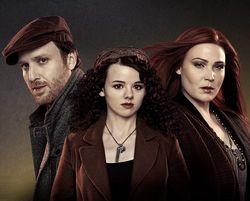 Melody was sitting in her room, watching over the Irish landscape. Humming a soft lullaby. A lullaby she had known ever since she was a kid, it always calmed her down. A small necklace was resting in her palm. Even after 1500 years of living, she still never knew the reason why she had this necklace. She knew it belonged to the Volturi, the most powerfull coven in the world, but she never dared to question anything about them or her necklace.
She had a normal human life, that was until she turned eightteen and a vampire sneaked in her house in the middle of the night. He had killed her mother and changed Melody. She still remembered his words before she blacked out from the burning pain. "I hope your father will pay for what he did." and with that he had run off, leaving Melody to change. For many years, Melody kept in the shadows. Her power allowing her to completely turn her body into a black mist. She would never leave her smell and so never a trail as to where she could been. And no harm could be done to her while in her shadow form. But she liked it that way. Even though it asked for a great amount of energy to keep her shadow form intact. She stayed hidden until, she found Siobhan and her mate, Liam, around 1700. They where the first vampires to make her feel welcome, and accept her gift. They where the ones whom taught her how to hunt properly and control her thirst even better. They where her family now.
Liam called her from downstairs, saying something important was up. Melody stood up and let her necklace fall back into the inside pocket of her leather jacket. She made her way downstairs where her family, Siobhan, Liam and Maggie where standing with worried expressions on their angelic faces. "What is wrong?"Melody immediately asked, allarmed by their facial expressions. "Carlisle Cullen wants us to testify against the Volturi. The Volturi believes the Cullens made an immortal child. But according to Carlisle it is infact the biological child of Edward and his mate Bella." Siobhan explained. Melody let a frown slip onto her angelic face. "It indeed doesn't sound like Carlisle to create an immortal child, let alone accepting any of his coven members to create one. No one knows the laws better than Carlisle." she said. Liam nodded his head and looked at Maggie. "What do you think, Maggie?" he asked. Maggie frowned. "I can not be sure until I have seen them and the child in person." she explained. "So I guess a trip to Forks it is then." Liam said looking at his mate and coven leader. Siobhan frowned. "I guess it won't hurt to take a look. After all, if this child is indeed innocent we should protect her. Especially after what Carlisle and his coven has done for us." Siobhan said, making her decision. The rest of her coven nodded their heads in agreement. Carlisle had helped Siobhan controle Maggie and Melody's thirst and showed them that they could live quite civilized. Also, Siobhan and Carlisle where old friends and had great respect for one another. "So, I guess we will go hunt before we go to Forks. Since we are not allowed to feed of humans over there." Liam suggested. Melody felt her throat burning at the thought of feeding. Even though they had feeded just three days ago, the hunger never truly seemed to fade away. Even after just feeding, a small burn would always be left, slowly growing bigger everythime feeding time came closer. "I think that would be a good idea. Maybe we should go to Scotland this time. We have hunted enough in Great Brittain for a while." Siobhan suggested, and they all nodded their heads in agreement. Melody honestly couldn't care less as to where they would hunt, as long as she could satisfy her thirst.

And so the four vampires made their way into the night, crossing the Irish sea and into Great Brittain. The run North until they reached the mountains of the highlands. The four vampires found some campers getting into their tents. Melody could hear their hearts beat and the flowing of their blood underneath their delicate skin. Skin that could be so easily pierced by her teeth to let the delicious red nectar flow through her throat and warm her whole body up. Melody felt her eyes go from crimson red to pitch black. She needed to feed, badly.
Siobhan held up her hand, guesturing for the vampires to wait. Melody growled slightly in annoyance. She didn't wanted to wait any longer. She wanted to quench her thirst. The burning in her throat was slowly making her mad.
Finally Siobhan guestured that they could go and attack. The humans where all in their tents almost asleep. Melody gently zipped down one of the tents and burried her teeth into a female's neck. The minute her teeth pierced through the female's skin, her blood flowed down Melody's throat which made Melody moan slightly in relief. The woman however, was drained way too fast. The man that was sharing the tent with the female had woken up and tried to get out of the tent. However, Melody was way faster and had the man pinned down and her fangs in her neck before the man could realise what was going on. Melody also finished this human quickly and made her way outside the tent, smelling the air for more humans. Sure enough there was another person trying to escape. A sadistic smile made it's way to her lips and she jumped infront of the human. A boy whom seemed to be around the age of 17. The boy fell backwards and tried to crawl away from Melody, fear in his eyes. Melody laughed and lunged herself onto the boy, draining him aswell.
Soon every human on the campsite had been killed and drained. Melody grabbed some bodies and the stuff that had belonged to the humans, that had sadly became their meal, and threw it all on a pile. Siobhan grabbed a match and lit it, litting up the bodies and belongings. The Irish coven watched as the pile slowly turned into ashes, their thirst quenched and their moods lifted.
After every evidence of those humans ever being there, the Irish Coven started to make their way to Forks. Towards the Cullens and the possibly immortal child.