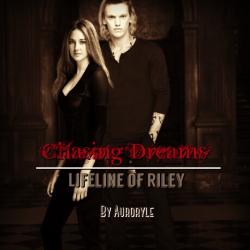 Hey guys, my name is Sanne, if you think what is that for name? I am Dutch and I love to write stories in English. My story also stands on Wattpad under the same name as this.
This chapter is about the two main characters who gets to know each other.

NOTE: I already wrote a lot of chapters, so don't be surprised it's so full already.. Enjoy reading!

Riley came back from the toilet in a pub where only supernaturals could enter, when she wanted to sit down where she was before 'someone' else took it. ''Excuse me?'' she said a little frustrated. "I'm sitting here now, you can sit with me and still have your drink'' the boy said instantly, smirking at her. Riley rolled with her eyes when she pushed him off on HER cammock, the boy 'Jamie' was staring at her when he used his mind control on her to step off the cammock. ''HEY!'' Riley said angry, ''If this is what you want.. fine'' she putt her hand on his nek and began to strongly electrocute him. Jamie began to scream, when he fell down on the ground. ''Enough?'' She smirked at him as a sign of revenge. He grabbed her arm to put her hand away, but without success. People around them were looking surprised, but did nothing. Riley stopped and relaxed. ''Now.. leave me alone!''

She walked out of the pub biting her lip. Jamie was behind her when he too walked out of pub. He teleported, ending up right in front of her, grabbing her shoulder. ''Don't mess with me, it could end really bad.'' he told her, she laughed a little. ''Good luck with that, because that counts for you too, Mister Fuckboy...and don't touch me!'' Jamie left her alone when she walked through the streets.

'Such an idiot!' she thought. She sat down on the sidewalk, staring at old houses, cars, people and anything else that came by. Riley sighed when she finally let herself out, looking down sadly because about what she had done. But then everything she had ever done came back to her. ''I'm a terrible person...'' she mumbled. ''No, you're not.'' A voice said, it was Jamie. He helped her get up. She looked at him with tears in her eyes. ''I'm sorry, okay?'' She said. ''It's fine... you're right, I shouldn't behave like a complete asshole.'' She sighed. ''I don't even know you but it's fine.'' Jamie looked around and then at Riley ''I do know you... but I have to go now, okay?'' He walked away. ''But... WAIT!'' Riley shouted. But he was already out of sight. ''I can't... I just... DAMNIT!''

She stood up and walked home, she lived in a group with other teenagers and some adults for assisted living. She was the only person there who was a supernatural. It was a hidden community so she couldn't use her powers in front of 'normal' people.

Riley sat on the couch watching TV, she couldn't get Jamie out of her head because of what he said. It kept floating around in her head and she was determined to find him and ask him what he meant. 'I know everything about you' A voice said in her head. 'Enough' she thought. She jumped off the couch and went outside, but nobody was there...

She sighed again. Heading inside, but she couldn't get in, she tried to open the locked door with her telekenesis. It didn't work. ''What's going on?'' she mumbled to herself. She was standing there in the cold for hours and hours and finally she fell asleep.