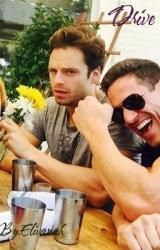 I am Iris Saladino and am 27 years old. I was shuffling in the chair where I was sitting.
I was currently on the plane towards London to take there the next flight to New York.
We were still not long departed from Kampala, capital of Uganda.
I hear you all ask, what should a 27 year old do in Uganda? Well I have a bucked list and 1 of those items was to do voluntary work.
Not just volunteering but effective going to help in Africa. As I left a year ago to Kampala to help there in a school for children with disabilities.
I was physical therapist by training so they could use me there. In that year I had learned so much. It was regrettable that the year was over so fast but I was very happy I could go back home. back to my family in New York .
I had 2 older brothers Don and Joseph. Together they are the owners of the well-known fitness club drive495.
I too had my practice, this was in the club of course. There's nothing better than work together with your family, ok we sometimes had disagreements but I could not do without them.
After a year without them I could not wait to get back home and hug them. I was very very close with my brothers, our parents were already long gone.
But the reason I was really close with them was that I as a teenager had been gravely ill.
I almost didn't make it, I had cancer. after 5 year ill and aggressive treatments the cancer was stabilized. I can't say that the full path is over but I have no more pain.
My brothers were during those 5 year day and night there for me. They were not really keen on that I went to Africa for a year. But eventually they let me go though.

After a while I calmed down and decided to kill time with sleep. The flight to London took 8 hours.
With the thought that once we were in London I could Skype with Don easier, since there was very bad range in Africa.

Once arrived at the airport of London I was looking for a Starbucks. After a year of unprecedented beverage and food I was desperate for something sweet and recognizable.
I had an hour before I had my connection flight to New York. The gate of my next flight was but at 500 m away me, so I could sit at a table with a tea and a doughnut.
Once I ordered I took place and took my iphone out of my handbag. It was here late in the evening so normally at home it would be around noon.
Let's facetime with Don, he would normally be working in the club but knowing that he always had his mobile phone with him and certainly would answers for his dearest little sister.
The familiar clink sounded which meant that Don had to have his mobile phone ringing. With the second, I was more nervous, it was a year that I had not seen him because of the bad connection.
Suddenly appeared the face of Mel, his wife, on the screen.
' IRIS!!!!!!! ' she called enthusiastic. I was sure everyone in the club had heard her scream.
"hola chica, I said chuckling ' ooh so good to finally get to see and hear you. How was your flight? Are you in London? What time are you in New York? We need to pick you up? ... ' she rambled on.
' Mel, Mel, quiet I can't follow. It's nice to finally hear you. And Yes I am finally in London, half-way ' I said as I took a bite of my donut.
' Oh Iris hope that Don does not see what you eat now. '
' What? ' I asked sarcastically. ' I had to eat a year long the weirdest things I do believe that I earn it. I giggled.
Yes sure
now say about Don, where is that devil? '
"he's working on personal training, but I do believe that he heard me. Every few seconds he looks here. ' She said as she turned the phone so that the training Hall came into the picture.
Don stood by the weights while a man lay on the couch and lifst weights.
I heard someone call Mel and not much later Don helped the man the weights. And then the 2 men walked towards Mel.