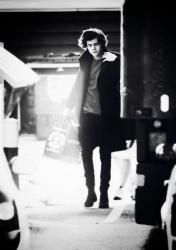 Sweat gave in to gravity and found its way down from his temples just like the rain was drawn to the mud around him. This storm did not only infuriate his surroundings, it was inside of him. Like raging thunder his heart synchronised with the fast crashing of raindrops on his shoulders, his soaked shirt no longer able to shelter his tense body from the weather. He did not need it. What he needed now was shelter from himself, from the very core of his being and from what was happening to him after a whole 70 cl bottle of 21-year old single malt whisky and two lines grit was all it took to set him off and form him into the merger of an erupting volcano and a devastating hurricane.

Panting as if his lungs could tear open his ribcage and burn through his strained, scratch covered skin any second, all his right and left-hand fingers clawed around the shovel, hoping to crush the wooden handle in the desperation of finding some relief. The angriness that had resided inside of him for the greatest part of the evening had made way for an intrusive feeling of distress and anxiety resulting in trembling hands of which the knuckles still seemed to be buried under a non-stretchable membrane of blood, the kind that resembled dried up clay after a long drought. The dimmed lights of his mud-covered Dodge Ram revealed a scene even more disturbing than what was going on inside his head at this very moment. No one can know, a mumbled mantra that ping-ponged from one side of his brain to the other, No one can know.
His bare foot hit the gas pedal, as if on autopilot, shifting the stick in reverse. No one can know, while sweat kept pulling loose strands of hair towards his cheekbones and he tried to find a way back to paved road; home.

As if drifting in and out of madness, his eyes flickered to the side every time the flashing lights of the very few night shops still open passed his car window; stimuli that beat up his senses like a red rag to a bull and made his heart swell in his throat. His fingers clung around the steering wheel so hard that he was afraid the miniscule puncture wounds carelessly scattered over his arms, could burst any moment now. No one can know, Every red traffic light was one too many and the few pedestrians on their way to the nightclubs in town, all seemed to be looking at him. They knew. They knew what hed done; they could smell the mud under his finger nails and breathe the smell of panicked sweat on his forehead and around his neck and the longer the car stood still, the closer they seemed to get. Piercing eyes, instructing him to give in and confess and to disappear into the ground. The light flickered, jumped to green and carefully, as if not trying to anger them, he let go of the clutch and pressed down the gas pedal. It was the most serene gesture hed made today, or since he could remember.

It seemed as if his subconscious knew how to complete routine tasks without taking notice of the traumatic state of mind he found himself in, No one can know. His soaked clothes hit the inside of the washing machine, fingerprint stained wine glasses made their way to the dishwasher without hesitation. Steaming water left the water tab, smashing onto the bathtub floor and filling the bathroom with the same haze that lived inside his head for so long, No one can know. Not bothered with the first-degree burnings the water would cause to his taut, strung skin, his body sunk into the tub as if it knew what to do to heal itself. His nostrils filled themselves with water in a hopeless attempt to boil out the thoughts in his head. The underwater surroundings limited the chaos outside to only the one inside his mind, which surprisingly relaxed him.

His heart beat slowed down, his body unclenched, his ears stopped buzzing, the light went on, he resurfaced, No one can know.