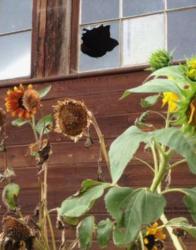 John Reeves was sitting on his porch and admiring his sunflowers. It was late afternoon, his favourite part of the day  Alice would be home any minute now, he thought, whilst getting up from his rocking chair. As he slowly shuffled towards his garden, he noticed the turned over soil next to the path. A sharp pain in his chest reminded him of the truth  his wife would not come home. He still didnt understand why he didnt remember burying her  Google told him its a side-effect of grief. While he turned away, he noticed a shadow at the far end of his fields. Who is there? John said. The figure stepped forward and now John could see it was a man, slowly approaching him. This is private property, John said, Please leave now or Ill have to call the police. The man, who was about 13 feet away now, snickered. John frowned and wondered if he had ever seen this man before. Why else would he be so comfortable trespassing, he thought. The man stopped next to John and bowed his head in respect to the bed of soil. Do I know you? John asked. The man smiled, In a way. John frowned and extended his arm. Im John Reeves. The man shook his hand. I know, John Reeves. Im Jack. John considered asking what his last name was, but then realised he didnt even care. Okay, Jack. So how do I know you in a way? When Jack didnt respond, John swallowed hard before asking, Did you know Alice? Jack nodded. John realised this answer only provoked more questions he didnt feel like asking and offered Jack a drink instead. Jack kindly declined. I actually have to get going. Ill see you soon.

John shook his head in disbelief, thinking back on that afternoon. It was 10 p.m. now and he found himself still trying to make sense of what happened. This man just showed up out of nowhere, claimed he knew Alice, and left. Something didnt feel right to John. He just couldnt put a finger on it. He closed his book and rearranged his pillows. He didnt get much reading done lately anyway, ever since He sighed and put the book down. As he turned to his left side, he noticed the withered sunflower on Alices nightstand. The sight saddened him and he turned away. It had been a tradition ever since he and Alice got married  John would pick her a sunflower and put it on her nightstand. She would leave it there until the next morning and then move it to the dining table. It had been two weeks since he last put a flower on her nightstand and it was still there, forcing him to face the truth  she would never take it downstairs again. He turned off the light and fell asleep thinking about his field of sunflowers and what to do with the turned over soil.

John woke up the next morning because someone was banging on his door. He grabbed his housecoat and staggered downstairs. When he opened the door, he was surprised to see Jack. By now, John had almost convinced himself that Jack had been a hallucination caused by his sleep-deprivation. Good morning, John, Jack said. John backed away, unwillingly letting Jack enter his kitchen. What are you doing here? he asked. Jack chuckled, Well, someone needs his morning coffee. He sat down at the dining table where Alice used to sit. Something wrong? he asked. John shrugged. He didnt feel the need to explain anything to this stranger. Instead, he pulled back his own chair and sat down. You woke me, thats all. It was silent for a while. Eventually, Jack cleared his throat and stated, Youre wondering why I keep showing up. John nodded and pressed his lips together. He almost asked why Jack knew his wife but decided not to. You are so close to realizing the truth, Jack said. John remained silent. I can almost hear you think, Jack snickered, You already know the truth, youre just scared to say it out loud. John started to dislike this Jack-character more and more, but something about him intrigued him. What truth? he heard himself ask. Jack leaned back in his chair and smiled. I knew your wife. You wanna ask me how, but you already know. John rubbed his chin and looked out of the window. From here, he could just make out the patch of dirt where..-Say it. You already know it, you just have to say it, Jack said. John slowly realised Jack was right. He had always believed that Alice was gone because of foul play. You killed her, he finally said.

The next couple of moments flew by so quickly. One minute John was upset because of this stranger pointing out all these things about him and Alice, next thing he knew he was standing in his kitchen holding his gun. Theres nothing in between, John slowly stated, pointed the gun at Jack.
 Jacks silent smile only angered John.
You know what Im talking about right?

Life and death. Theres nothing in between. And your life ends now.
BANG

Jacks body fell to the ground and John dropped his gun. What had he done? He rubbed his eyes and started thinking. What to do, what to do He picked up the gun and put it back in the kitchen drawer. He took a few shaky breaths and then it hit him; he would just build Jack a coffin and bury him next to the sunflowers, next to..- No time to think about Alice now, he reminded himself as he grabbed his coat. When he got to town, people looked at him as if they were worried about him and he realised that by now everyone must have heard about Alice. He pulled his hood over his head and walked faster. He bought some wood, extra-large garbage bags and sunflower seeds  any more days like these and his entire garden would be a soil patch. As soon as he got home, he hurried back to the kitchen and started filling the garbage bags. He dragged them outside and when he re-entered the kitchen to look for the bullet, he noticed the shattered glass of his window. Son of a gun, he thought, I must have shot right through him and my window. He went back outside and found the bullet, next to the soil. As good a place as any, he figured and he started digging. By the end of the day, he had extended the piece of the garden where the soil was turned over and planted sunflower seeds. He sat back in his rocking chair and smiled. No one would ever know what happened.

When John woke up the next morning, he felt well rested. He grabbed his housecoat, went downstairs and made himself some coffee. He went along as he would every day and it almost felt like nothing had happened until he was about to switch on the TV after dinner. Did you really think you could get rid of me that easily? Jack asked him. John looked at his own reflection in the TV and noticed with a chill that Jack was standing right behind him. He rubbed his eyes, convinced he had to be hallucinating again. No TV for me today, he thought as he walked up the stairs to grab his book from his nightstand. When he came back downstairs, Jack was sitting at the dining table. John slowly shook his head and mumbled, Not real. Jack chuckled and leaned back in his chair. Its gonna take more than just a gun to get rid of me, dearie. John frowned  Alice used to call him that. How could Jack possible had known that? He rubbed his eyes again and sighed. It had been a long day and he was starting to pay the price. Without paying further attention to Jack, he stood up and went upstairs to go to bed. Surely a good nights sleep would help, he thought as he dozed off.

After a few days of seeing Jack everywhere he went, John started blaming his guilt for the hallucinations and decided that there was no other option than turning himself in. As he drove to the police station, Jack tried to convince him to stop what he was doing. Theyre gonna know the truth, John, he warned him, while the car pulled up at the station. John shrugged and hurried inside  he would rather spend his life in a quiet jail cell than being harassed by a fragment of his imagination. The police officer John talked to was very kind and understanding, which worried John  he had just confessed to a murder after all. The officer followed him to his house and together they dug up the grave, next to the sunflowers. You have to stop this, Jack warned them, You dont want to know whats in there. While the officer lifted the top of the casket, Jack asked John calmly, What are you going to do with that gun? John frowned and turned around. No, what are you doing with my gun? Jack shook his head, laughing. I told you it wasnt that easy to get rid of me. I am you.
BANG

Alice Reeves, soon to be Griffin again, pulled up at her old home and immediately noticed something was wrong. For starters, there was a police officer in her garden. Plus, her garden was all dug up. She quickly got out of the car and asked the officer what had happened. The officer seemed as confused as she felt  apparently her ex-husband John had gone to the station to confess to a murder. When the officer followed him to his garden to dig up de body, he found a casket filled with empty garbage bags instead. And as he turned around to ask John if this had been some kind of joke, John pulled the trigger of his gun and killed himself. Alice was not as surprised as she thought she would be  There was something off about John for a while now, she said, He would wake up one day as John and the next he would be like a completely different person. It got so bad at one point that I just had to leave him. Thats why Im here now, to drop off the divorce papers