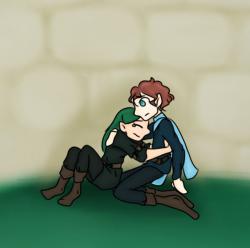 Avondir lived in a small room in a far corner of the Academy.

When the young man opened the door with a small key he had attached to his belt, he smiled at Acacia. Come in, Ace. Your parents probably wont find you in here.

I hope not, the girl mumbled, as she stepped inside.

The room wasnt as big as she expected. Most chambers students hired for when they studied at the Academy, were large enough to hold a two-person-bed, sometimes even two, a desk, at least a closet, and had two windows.

Avons room only had a small bed, a desk, and a little, open window.

It isnt much, but its home at the moment, Avondir mumbled, as he saw the girl looking around. I have some extra pillows blankets, so I can sleep on the floor if youre not comfortable with sharing a bed with me.

Ace smiled, as she walked to the window. Thanks, Avon. You dont know how much this means to me, really-

No problem! the boy interrupted, closing the door and locking it behind him. Ill place the key here, so if you want to leave, you can just grab it, okay?

With a small nod, Acacia turned to the window, feeling the slight evening breeze meeting her face. She sucked in some air, before asking: Why is it open? with a small voice.

Avondir shrugged, and walked towards her. Theres no lock for it. Its been like this since I came here, and probably before that.

Didnt the General offer you a better room? the girl asked, frowning at the thought of her father letting anyone sleep in such a small, cold place  but then, this was also the man who wouldnt let his own daughter pursue her dreams.

The young man let out a small laugh, lifting his gaze to look out of the window. Nope, but thats just because I couldnt afford one. I only got this one if I promised to study hard enough, and so I wouldnt sleep on the streets.

My mother wouldve loved to take you in, Ace chuckled, she has quite the weakness for children in need.

Then she would adore my sis- Suddenly, Avondir held his words in. Acacia turned towards him, frowning at him in confusion. You have a sister?

Avondir seemed to hesitate for a second, but then sighed, and shook his head. Not important, Ace. Lets find those blankets I was talking about, shall we?

Acacia watched as he walked towards his bed, and almost crawled underneath it to grab something. He came back up again with a blanket in his hands, smiling goofily at her.

No-one knew where he came from, she remembered her father saying. What was the deal with this boy?

Do you need something, Ace? Avondir interrupted her thoughts, and she quickly shook her head. No, thanks.

The young man smiled softly, before putting his focus on creating a makeshift bed next to the normal one. Ace walked over to the bed, and sat down on it.

Indeed, a strange one.

B-but what if I do? I-I could never f-forgive myself Audace stammered, as he avoided looking into his wifes mesmerizing, blue eyes. The woman smiled empathetically, and ran her fingers through the strands of hair laying on his forehead.

Yes, you screwed up, Spica whispered, but I know you; I have for forty years. Ive seen you struggle; Ive seen you fall. I watched as you held our beautiful daughter for the first time, how you fell in love with her from the first look. Audace, look at me- she gently tilted his chin up so she could look him in the eye. - that wont leave her. She will always be your little girl, no matter what you do.

Audace kept quiet for a moment, and then, nodded. Y-youre right, Spica, he whispered, bringing up one hand to cover the one his wife had cradled his cheek with. What would I do without you?

You wouldve cried over the smallest things, my brave General, the woman joked, and Audace let out a weary laugh. I love you.

He leaned in slightly, capturing Spicas lips with the gentleness he almost never showed. The woman smiled, returning the kiss as her husband latched his arms around her waist.

You do that, Spica said, as she pressed a swift kiss on her husbands cheek. Ill go check on Cassi and Methone.

Audace nodded, and stood up from the couch to walk towards the door. However, he was stopped by his wifes voice: Audace, dont worry about it. Youre still a great father.

Thanks, Spica. The mans voice sounded thick with tears, and as he walked out of the house, Spica took a deep breath, shook her head, and made her way back up to her two other daughters.

Yes, I made art for originally chapter four but I forgot to post it there. However, that's what Ace and Avon look like!
Kudo Volgende hoofdstuk