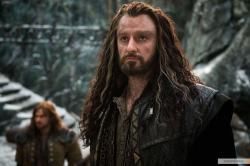 We kept sitting in each others arms until the sun had completely risen on the horizon. We should probably head back Richard then spoke which made me nod and slowly get up, not really wanting to let go of this moment. When we arrived back on set everyone already started his or her day. People walked in and out of the cafeteria getting a quick breakfast, actors walked in and out of the make up department, the crew was busy building new sets. Just when I thought I could sneakily walk into the cafeteria while Richard walked towards the make up department I heard someone call my name from behind me. It was so close it startled me, when I turned around in the direction of the persons unexpected voice I saw Orlando walking towards me. So is your dear dwarf king back? he asked Oh you could see hes all over her, dear, dear how useful you could be to get that dwarf to his knees! Lee Pace spoke as he walked down the stairs of the make up department all dressed up as Thranduil. For a moment I didnt even know what to answer him, I was just so mesmerized by his amazing outfit that I totally forget about what he had said. Of course Lee noticed I was staring at him. Oh dear is she already falling for me? See I am just irresistible! he then spoke with such a cheeky smile even Orlando hid his face in his hands and shook his head in disappointment Your ego is definitely as big as that wooden crown upon your head! he then spoke which made me laugh. Oh dont feel flattered, I was just looking at how ordinary youre looking compared to the gorgeous dwarf king I then added which almost seemed to cause him a heart attack. His mouth fell wide open and his eyes just looked so shocked I would almost believe he just saw Sauron or even Morgoth himself appear. I would kill her for it father Orlando now said with tears in his eyes of laughter. Yes you are very right son! Attack! he yelled and took his sword running towards me which made me look around to see if there was something to defend myself with. When I didnt immediately find something I just started running around the tables or hiding myself until my brother and Aidan suddenly showed up in full dwarf costume Hey leave the lady alone! Aidan now yelled also running down the stairs with his sword. Soon Dean followed him and so a fight started between Lee Pace and Dean and Aidan. I had to admit Lee was a natural talent with his sword, the way he kept fighting back the dwarves almost seemed magical. He looked so elegant and balanced swinging his long sword, the dwarves looked rather clumsy compared to him which was of course as it was meant to be. Dont worry my lady well save you! Dean said playing his part as Fili, no matter how mad I was at Dean sometimes from the moment I saw him as Fili or when we talked about Tolkien I seemed to forget about all my anger. Maybe you can help a little though? Aidan suddenly spoke as he was struggling to keep Lee away from him Or you could help too my son? Lee now spoke as Orlando was just sitting in a chair watching them fight with some chips in his hands Nah Im good thanks dad! he spoke before handing me some chips. What on earth is the meaning of this! Stop this fight immediately you fools! we suddenly heard a deep and husky voice yell. When we all looked towards the stairs of the make up department we saw Richard walking down in his full Thorin Oakenshield costume. Once again my mouth fell open in amazement Phuh I heard Lee say in a jealous tune. My lady? Richard then spoke walking towards me and offering me a hand which I gladly accepted so he could walk with me to set. I will not forget it! I heard Lee yell We cared about you! Orlando desperately shouted You are no longer welcome in Mirkwood, be gone! Lee still yelled before we went outside and burst out into laughter just walking to set ready for a long day of shooting. Now that I had Richard back I didnt mind having a long day, his company gave me enough energy to make it through the day without getting hurt or tired. Of course everyone noticed us hanging out together again and soon everything went back to normal. Everyone was joking about the dwarf king and his mysterious queen, Dean kept an eye on us everywhere we went, if I didnt know better Id believe he auditioned to play the eye of Sauron. Richard and I tried not to care or think about the other too much, still I couldnt help but wonder what we actually meant to each other. I couldnt deny the tickling feelings in my belly when I was around Richard, the light feeling in my head, would he feel the same way when he was around me?