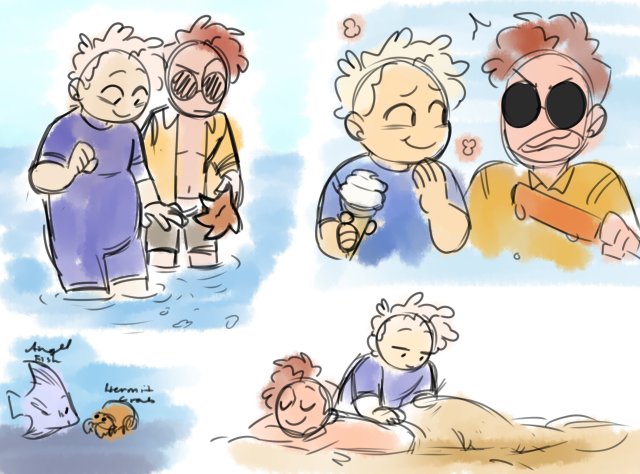 Art by @Kiingbiing on Tumblr


Aziraphale and Anthony considered themselves to be real teenagers now. Anthony liked to bask in the sun for some time while Aziraphale read a book in the shade, interrupted by going from the biggest slide there was eight times in a row. They were now old enough to play table tennis without supervision (the one thing that Aziraphale was actually pretty good at) and they still ate ice cream whenever they could.

Usually it was Anthony who came up with ideas for them to do and convince Aziraphale that it would be fun, but not this time. Aziraphale wanted to see some play that the animation team of the hotel would perform that afternoon and Anthony wasnt the kind of teenager that had the concentration to watch an entire play.

Shakespeare? Anthony whined when they walked into the small amphitheater that was right next to the hotel.

The theater was almost empty, save for some of the employees from the hotels animation team on stage and a few people who were also watching. Anthony threw his head back and groaned dramatically, they had to read some of Shakespeare in class and he found it to be absolutely dreadful. Aziraphale looked at Anthony fondly, not disturbed by his theatrics, and laughed while he looked at the stage.

Its not one of the tragedies, Anthony. This one is funny!

Youre thirteen years old! The other one exclaimed. Youre not supposed to go to old people plays.

Aziraphale only huffed as response. His friend sighed and gave in because he really seemed to enjoy this. That didnt mean that Anthony would stay still and watch. He was shuffling about, walking around Aziraphale and was talking a lot. It didnt seem to bother him that much, he probably knew the whole play from the top of his head because he had no problems following it even after Anthony kept talking to him. Anthony had no idea what it was about.

You know my parents made me ride a horse a few months ago? Anthony scoffed with a grimace at the memory of it. They thought it would be a great way to spend my time. Petting ponies.

No. Bit hard on the buttocks.

We have horses, Aziraphale mused. I dont think they like me very much.