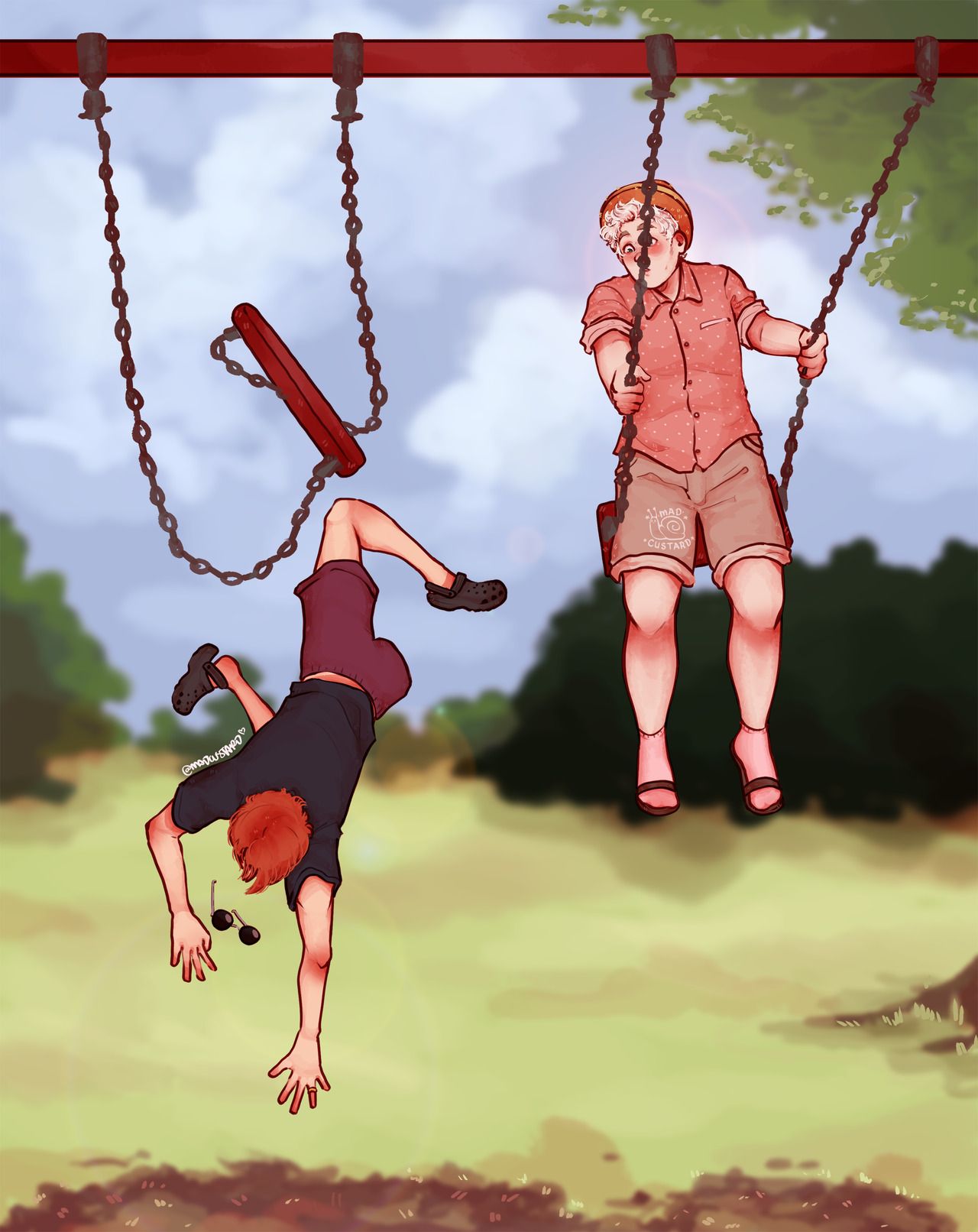 
When they came back the next year, Anthony had changed. He was growing his auburn hair out, against the wishes of his parents, and took to wearing his sunglasses as much as he could. Even inside.

The teenager was just overcoming his speech impediment, it bothered him less and less and would only come out when he was flustered or emotional. The other kids at his school found something else to bully him with and that something else was his eye colour. Anthony would call it yellow, Aziraphale would say it was more golden. The correct name was amber, but a very light shade of it. It was a very uncommon eye colour and made Anthony wear his sunglasses as much as he could. When anyone would ask about it, he would claim light sensitivity. He liked it that people couldnt see his eyes, couldnt comment on the colour and would only see their own reflection when they looked at him.

Aziraphale had not once made a comment about his eyes. He probably noticed, but just accepted it and moved on. Now he would wear the sunglasses even in his presence. He would again not comment and just accepted it as a new thing.

He was wearing them when they stood atop of a small cliff above the ocean. Waves crashing softly against the rocks beneath them and Anthony glanced down. He wasnt particularly afraid of heights or the sea, but the idea of jumping off the cliff scared him somewhat. He didnt want Aziraphale to notice.

Cmon angel, he tried to convince the other boy, but also himself.

It wont be dangerous? Aziraphale guessed what Anthony was going to say next, and swallowed.

He sounded a bit unsure and wished that he could swallow the words back into his mouth. But he already got this far, he already coaxed Aziraphale in joining him here and tried to get him to join him in jumping off, so he had to take the leap, quite literally, but he might back off if Aziraphale wouldnt agree to jump with him.

Fine, Aziraphale blurted out. Lets get on with it.

Anthonys last reason to not jump went out of the window. Aziraphale smiled nervously at him and grabbed his hand. Anthony stared at their hands for a second and didnt know if he should pull his hand back or should let it happen. His father was quite clear, boys werent supposed to hold hands under any circumstances. He let it happen anyway, because he felt a little more secure and he was pretty sure that Aziraphale only grabbed it because of his nerves. He gave his hand a little squeeze to ease his nerves, counted to three and they jumped together.

That evening was the second time they were allowed to have dinner together. Not that it meant alone, because Aziraphales family sat two tables away and Anthonys parents on the other side of the restaurant. The blonde teenager seemed to be a bit nervous. He seemed distracted and was fidgeting with the hems of his shirt.

Whatever is bothering you.

Aziraphale sighed. Do you have a girlfriend? he asked.

No! Girls are gross, the other boy answered right away and he meant it. He wasnt interested in girls yet, but he knew he probably would be soon, like the boys in his class were. Why? He eyed Aziraphale suspiciously.

He knew Aziraphale wasnt telling the truth, the boy was such a terrible liar that he could always tell right away. He decided not to ask why again, but it was only fair to return the question, right?

Do I. Have a girlfriend? Aziraphale repeated.

No. No, thats not how it works in our family, Aziraphale smiled, still nervous. Were not allowed to date until we finish school. And after that were supposed to get married and all that. He sounded almost rueful.

So you wanted to live vicariously through my dating life? Anthony smirked.