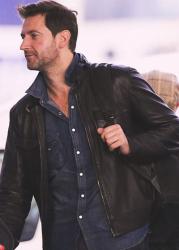 When we got to the trailer I opened up the door and turned around towards Richard, So good night then? he spoke as I watched down on him from up the stairs of my trailer. Well yes good night I said, but when he wanted to walk towards his own trailer I called him back. I just couldnt keep in all those confusing feelings anymore, I had to know if he at least felt the same way. Please dont go like that, am I going crazy or losing my mind, maybe? But I just need to know how you feel about everything, what you think about us, if I can even call it us. Do you feel those tickles in your belly, do you feel light in your head when youre holding me? Do you feel anything at all? I asked getting all emotional and afraid that he would just think Im going mad. Before I could say anything else or think about it any more he turned around towards me and jumped up the few stairs pulling me in his arms and pushing his lips against mine. For a moment I had no idea what to do, I couldnt even think straight. I just let it all happen, little by little I tried to relax and I opened my mouth so his tongue could meet mine. As we stood there on the stairs kissing each other intensely we barely even noticed the thunder rumbling in the distance. Richard who first held his arms around my waist was now running his hands through my hair and over my cheeks while his soft warm lips carefully caressed mine. I laid one arm around his neck and ran my other hand through his hair as I tried not to fall down. I had no idea why but I could barely feel my body anymore. I was so caught up in the moment I wasnt even sure if my heart was still beating or not. For once in my life I didnt even care about that, I didnt care about Richard kissing my scar, I didnt care about my weak and fragile heart. All I cared about was the tall, handsome and kind man standing in front of me kissing my lips one more time before carefully taking a step back. Only when I opened my eyes again to look up at him I realised how I was shaking on my legs. Richard noticed it too and quickly grabbed me around my middle again so I wouldnt fall. Are you okay? he then asked looking really worried Yes, yes dont worry please. I never felt better, just dont look worried now, not after what we just had I quickly spoke which made Richard smile at once. This doesnt have to be the only time we feel like this Richard then said which made me smile as well. Does this mean that you love me? I asked still not sure about what just happened. Oh Hera I thought youd never notice, I loved ever since I got to talk to you on the beach, you are such a mysterious, beautiful and strong woman! he said which made me blush so badly I felt like my entire body was on fire. Oh please I mumbled, he only started laughing. See you dont even know how strong and beautiful you are, I have been alone for a long time and I never thought I could truly create a bond like this with someone, I admire you Hera Richard said, I had no idea what to say anymore so I hugged him tight. I believe I love you too, trust me I dont even know how love is supposed to feel, I never thought Id truly love someone. After everything I had been through I didnt think I was capable of love. But I believe I love you I said holding on tight. We held each other for a while longer before Richard said we should probably get inside since the thunder was getting closer. We only just got inside when the rain started pouring down, this was a perfect excuse for me to ask Richard to stay with me. At first he seemed a little scared of going to bed with me. But once I convinced him that no one would have to find out he did. Its not that he felt ashamed for kissing me, he just couldnt seem to get over the fact that I was Deans sister, I knew very well how mad Dean would be if he found out about us being in love. Yet I convinced Richard he wouldnt have to find out until we were all ready for it. In some way I was also afraid of what the others would think, what if they thought I was using Richard. He was almost 20 years older than me, what if they thought I didnt love him for real and just tried to become famous through him? I could only hope they knew me better than that by then.