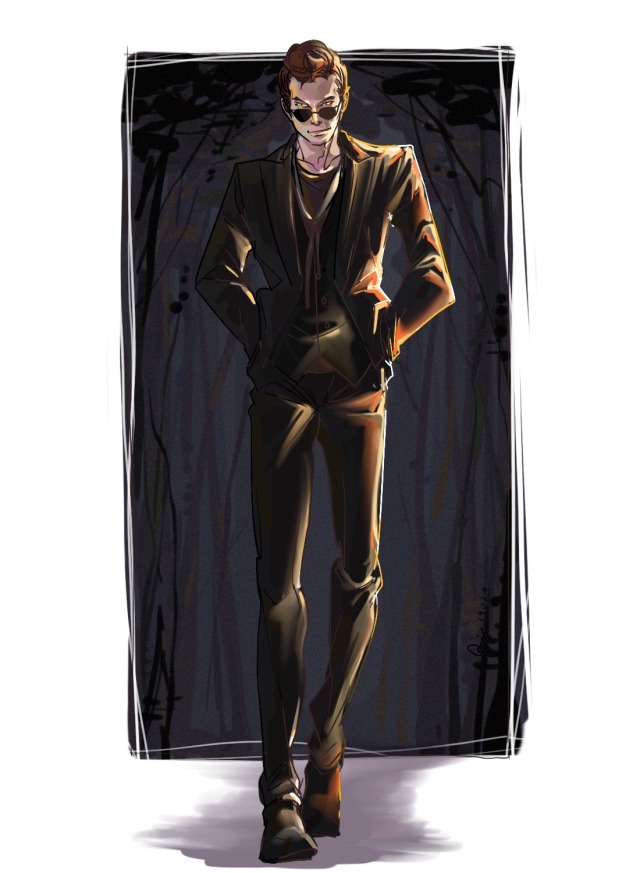 Anthony Crowley sprawled himself out over the hotelbed and closed his eyes. The mattress felt so soft underneath him and he was pretty sure that he could sleep for at least the next decade right now. The flight from New York had been awfully long and he was sure that the kid that sat a few rows behind him was the literal antichrist. Thank someone, he had two whole weeks of peace and quiet to look forward to. Right now, he could really use a drink.

Instead of giving into the urge to fall asleep right there, he forced himself up from the bed and tried to smell his own shirt. His nose wrinkled and he opened his suitcase to rummage through the neatly folded clothes to find another shirt that didnt smell like body odor and airplane. His auburn hair looked slightly disheveled, so he dragged a hand through it and decided that this was all the effort he could muster right now.

Crowley entered the hotel bar. The hotel had changed a lot since he last visited, but the bar was still at the same place. A bit more modern, but he didn't mind that. He hadn't been at the resort since before he turned 18 and turned away from his parents. Their relationship had been very complicated and after the troubled last holiday he just stopped going. He absolutely didn't want to think of that anyway. Now that his parents both passed away earlier that year, he decided to visit one last time. He could also really use a break from Sandy, his long term girlfriend, so they decided to both go on separate holidays. It might've been a mistake to come back to this place and all its memories. Threatened to be cut off from his trust fund and written out of the family will, he had straightened out years ago and this was the place where his teenage rebellion had started.

The man ordered a long Island iced tea because it seemed like the only thing they had were cocktails and the young French bartender just stared at him when he tried to explain that he just wanted one of the components alone in a glass. He tried not the scowl at the cocktail when it came with a colourful umbrella and discarded the paper straw.

"Anthony, is that you?" a strangely familiar voice asked and Crowley turned around.

Before him stood a slightly tanned, slightly sunburned man wearing cream coloured shorts and a pressed, light blue polo shirt. His midsection was slightly rounded and his face a little bit chubby. On top of his head, buried in blonde curls, sat a pair of sunglasses. His grey blue eyes looked expectantly at Crowley, but his hands were fidgeting nervously with the ring on his pinkie finger. He was the polar opposite of Crowley, who wore dark, tight trousers and a dark grey, wrinkled shirt (all his clothes were neatly packed by Sandy, but Crowley had the ability to make everything look wrinkled and creased within a few minutes of wearing it). He was lanky and all sharp angles. His sunglasses sat on his nose and he sat loose-limbed on the bar stool, while the other one had a near perfect posture when standing upright.

Crowley knew who he was immediately and suddenly wished very hard that he never made the decision to come back here.

Aziraphale! he said and he hoped he sounded cheerful. Fancy seeing you here.

The man, Aziraphale, seemed relieved that Crowley recognized him. He clambered rather clumsily on the bar stool next to him without an invitation and ordered a glass of sparkling water. Crowley took a swig of his cocktail. Aziraphale sat straight up next to him, his hands neatly folded in his lap. For a long, awkwardly silent moment he stared at his water while Crowley looked at him from the corners of his eyes, thankful that the sunglasses he wore hid his eyes from the world. Aziraphale sighed and looked up to Crowley, who tried to smirk casually and toyed a bit with the previously discarded umbrella.

Its Crowley now, he interrupted him before he could say anything else.

Crowley swallowed and nodded. He had gotten used to his last name and he actually never really liked his first name anyway.

He raised his eyebrow above his sunglasses. Youll get used to it? he chuckled a tad bitter since they hadnt spoken in twelve years and he couldnt see the streak ending after this little chat anyway.

Aziraphales face fell immediately. We need to talk. About that.

They didnt need to talk about it. Crowley absolutely didnt want to talk about it. But Aziraphale looked up from his drink and Crowley tried to down his own drink at once. Aziraphales grey eyes seemed kind of desperate and Crowley always found it difficult to say no to the man. That hasnt changed at all, apparently. While he mulled this over, his phone rang and he fished it out of the tight pocket of his trousers.

Ive got to take this, he said, glad to be distracted. Well talk over dinner, yeah?

He slid of his bar stool while saying that and left quickly when Aziraphale only nodded to him. Crowley hadnt even noticed what exactly he suggested until he already pushed the phone to his ear and pushed the doors to the hallway open.

Tony, babe! a shrill voice sounded in his ear and he groaned internally. How was your flight?

He hated it when Sandy called him Tony, but it really didnt matter how many times he told her just that, she kept doing it and he just kinda gave up on it.

Flight was just great, he answered rather distracted, realizing that he had to face Aziraphale at a dinner that would be very awkward in the least and would probably end very dramatic. To keep his mind off from wandering there he decided to ask about her flight to wherever it was she went and listen to her ranting about rude stewards and disgusting old people.