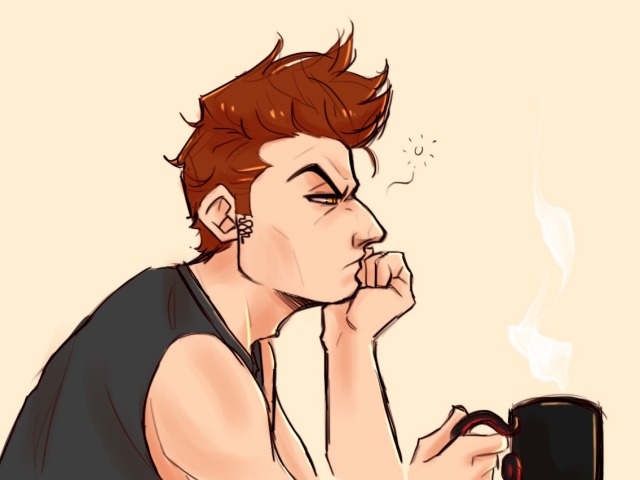 Since Crowley landed only yesterday, his brain wasnt caught up with the different timezone yet. Since he was now a (somewhat) sensible adult, he decided to go to the gym inside the resort to run for a bit, instead of going outside and potentially getting lost. That had happened more times than he was willing to admit. Everything looked so different in the dark, who could blame him? It also meant that he could just stop whenever he wanted instead of also getting back to his starting point.

Around 1 am he intended to get back to his room and take a nice, hot shower. Instead he passed by the lobby and decided he had to make a pit stop. Just a small one, he promised himself. He leaned against the wall while watching Aziraphale, who stood in front of a large bookshelf, his hand raised to his face and a finger pressed to his lips. He seemed to be deep in thought while studying whatever books where on the shelf. The lobby was dimly lit at this time of night. The couch from the last time was replaced by several rather uncomfortable looking chairs.

The sudden break of silence startled Aziraphale, who jerked his head towards Crowley and laid his hands, which fluttered to his chest, on his heart. Oh, its you, he breathed out unsteady and he gave Crowley (who was still wearing his running attire) a once over. I don't suppose they do, no."

Crowley grinned and pushed himself away from the wall with his shoulder while crossing his arms in front of his chest. He just hoped he looked as cool and collected as he intended to be. He was very aware of the fact that he could make people feel uncomfortable when he acted like this and Aziraphale certainly seemed to be uncomfortable. That might also be because they almost seem to be an echo from twelve years ago. The memory almost made him flinch.

No Pride and Prejudice this time? Crowley asked and he knew he was basically launching himself into dangerous territory.

No. Not tonight, Aziraphale answered, his voice tight, and Crowley could almost hear him swallow in the silence that followed when Aziraphale turned his eyes back to the books on the shelf. I was looking for a book I saw here last time, but I cant find it

He let his fingers caress the spine of a book, seemingly lost in thoughts, before turning himself towards Crowley with a forced smile. Crowley was still standing near the entrance of the lobby with his arms crossed. He shouldnt have come here.

My body still think were on east coast time, didnt get the memo that we landed in Europe yesterday. What about you?

Aziraphale sighed and planted himself in one of the uncomfortable looking chairs. Crowley let his arms drop to his side. A rather pesky bout of insomnia, Im afraid. Never got quite over that.

Oh, sorry to hear that, Crowley murmured and let himself flop into the chair across from Aziraphale.

Are you, er, enjoying your stay here so far? Aziraphale still seemed uncomfortable and rather nervous.

Crowley shrugged. Its ok. The resort always seemed to exotic when I still lived in London, but its just more of the same the rest of the world has to offer honestly. He pulled a face. And theres probably a honeymooning couple in the suite next to me if the sounds are anything to go on by.

Crowley studied the blonde man, how he sat upright in the chair and the way his fingers played with the hem of his shirt. He seemed to look straight past Crowley to other things in the lobby.

Stop being nervous, Im not gonna snog you this time, Crowley blurted out with a snort, even though he tried to be suave about it. Well, now he went there, no taking it back.

A dark blush spread from Aziraphales neck towards his cheeks. I dont, I didnt think - wouldnt -

The right thing to do was to interrupt Aziraphale and maybe to assure him again, or just to change the subject. Crowley did neither and just watched him struggle with the words and to see the blush creeping up his cheeks. Crowley wasnt the kind of person who did the right thing. He still felt a little bit bitter over what happened and how it destroyed their friendship. Aziraphale swallowed and looked directly at Crowley, his blue eyes piercing and he already forgot that he didnt want to say anything before the other said anything.

He waved his hand vaguely about. Alright, whatever, dont worry about it, he said and got up from his chair. Im gonna take a shower and get some sleep. Good night, Aziraphale.