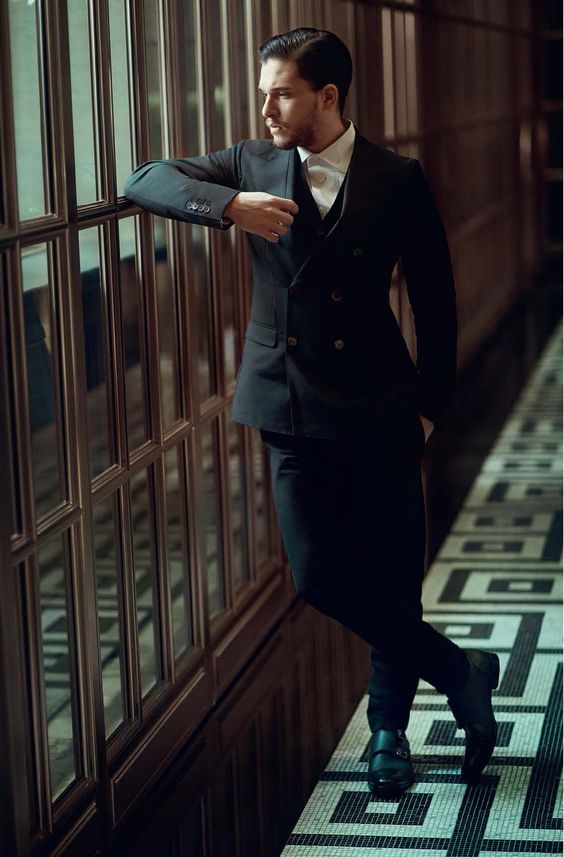 I thought I'd have a hard time peeling my eyes away from Emma, but since everybody wants something from me and is constantly asking for my attention, it's much easier than expected. Which is a good thing, because she looks like bomb shell and I can't wait until one day I'll be able to show her off. While I'm enjoying the get-togehter, I can't wait for it to be over. I made a reservation at one of my favourite restaurants and since it's Christmas, I didn't book any new events for the weekend. If she'll allow me, I'm absolutely taking her home. It's been a struggle, ever since we talked it out in the conference room. I wanted nothing more than to pull her into my office and draw the blinds, so I could do all the things no-one is allowed to see.
But I can't, so instead I'm chatting away with my employees and sometimes their spouses. I'm surprised by how open they seem to be with me, but I much prefer it that way. Growing up at parties like this, it always shocked me how afraid they seemed to be of my father. The pleasantries go on for a while. With this, the meeting with my father my first full day working I'm absolutely knackered. There's a part of me that regrets planning my date with Emma on this night, but at the same time the idea of spending it with just her fills me with new energy. Besides, between the weekend, Christmas and Boxing-day I really didn't have the pataience to wait until after that.
I made the reservation at nine-thirty, but the party is still going when it's nearly nine. I send Emma a quick text, because I'm worried that telling her in person might seem suspicous.
Meet me outside in ten minutes. Don't come out directly after me.
I say my goodbyes, wishing everyone well for the holidays and then take my leave. It's snowing outside, cloaking the dark city in magic. I get a message from my driver that he's running late because of the weather, so I seek shelter under a ledge and light a cigarette. Ten minutes later there's still no car, but I see Emma coming out of the office. I wave her over.
"Car's late." I say as I light another cigarette, she does the same.
"So when have you progressed from your so-called stress smoking to regular smoking?" She teases, huddling deep in her coat. The little snowflakes in her hair make her even prettier. I chuckle, winking at her.
"I might be very nervous for this date."
"The great Lucien du Castellon, nervous? Surely you jest."
Truth is, I'm nervous. Jittery even. I don't know why. Maybe because my feelings are so strong, or maybe because I have to keep my attraction to her a secret. It's driving me mad. Finally I see the recognisable lights of my Aston Martin nearing in the dark; I stub out my cigarette and step to the side of the curb to stop it.
"A driver?" Emma asks a little surprised.
"Have to show off a little, don't I?" I open the door for her. "No, I usually like to drive myself, but since I'm not entirely back to health yet..."
"Gabriel isn't letting you?" She smirks at me as she steps in.
"Rub it in, why don't you?"
I get in on the other side and tell Mark where I want to go. Then I turn to Emma, who's already gazing at me with those hazel eyes I could drown in. She's quicker than I am - I feel her hand on my cheek and then her lips on mine. I breathe a sigh of relief, pulling her closer to me. She's nearly on my lap when we're rudely interrupted by the beep of the seatbelt-indicator. I meet Mark's eyes through the rearview mirror and I'm pretty sure he's laughing. "Sorry, sir."
I wave it away, clicking in my seatbelt as Emma does the same. It seems the universe is against us, but I'm dead-set on beating it.

"Different menus every week?" Emma raises an eyebrow at me. "That seems excessive."
"I never said it wasn't."
"And you have to pick based on... the names?" She laughs, shaking her head. "They really come up with the craziest things."
We picked the continental option, because that means we'll get dishes from all over the world. Considering it's a seven-course dinner, that's a lot of different flavours and I'm excited. We just had our amuse, which was from Spain, and are now waiting on the entree, which we're told is French. Very much against custom I refused to be served any wine, so instead we're getting seltzer with a fruit local to the area of each dish.
"Tell me," I say, watching Emma circle the rim of her glass with a finger. "What are you doing for Christmas?"
She smiles instantly, clearly excited. "I'm spending Christmas day with Kenna. It's become a tradition over the years that neither of us wants to break, so we're keeping it going. For boxing day I'm going to see my parents and, if they're coming, my siblings. Relatively simple, but I like it that way."
I smile, nodding. "That sounds like a wonderful to spend it. And I suppose you're lucky - it's going to be a white Christmas."
That makes her laugh, which I don't understand. "We usually have a white Christmas here in Edinburgh." She explains. "Because we're so far up North. White and very cold. Though I imagine that's different in Paris."
"Quite." I say with a chuckle. "White Christmases have become rather... rare, sadly enough. This is actually a nice change."
Her face is warm and I can't stop staring at it. Lucky for me, it seems that she is staring back. "What about you? Any big plans to live up to your name?"
It seems she means it as a joke, but at the same time I suspect that, like many, she's expecting me to have big plans, like a trip to Bahamas or something. That's what most people expect. I shrug. "Not really. Matthew and Gabriel are coming over tomorrow and we're decorating a cake together, as per our little tradition." I grin at the idea.
"Who bakes?" She narrows her eyes. "Matthew? Gabriel seems to chaotic for it."
I laugh, shaking my head. "I bake. Not often, but I really enjoy doing so. It means that at least we'll have an edible interior after we've done destroying the exterior."
"Please send me videos. And pictures. I want live footage." She's grinning. "What about boxing day? Going to see family?"
The joy disappears from my mind almost instantly as I shake my head, remembering Eschieve's text how father isn't allowing her to come over. "No plans for boxing day." I say casually. "Our family doesn't really have the... dynamic to celebrate things like that together. But!" I'm saved by the waiter as I see him come over with our entree. "Besides the fact that my family is far too depressing to talk about, it seems our next course is here."
I recognise the plates instantly, and my eyes flick to Emma's face to see her reaction to the snails we were just served.