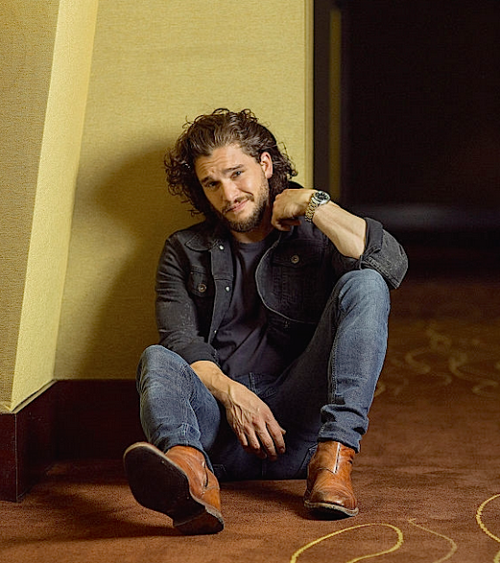 I'm not nervous. I'm also not sure if that's a stupid thing or not, because I have no idea how much of our relationship rides on Charles approving of me. I'm stirring in the pot of mint-mustard sauce to accompany the meat, which is now roasting away in the oven, together with the potatoes. I hear the muffled conversation between brother and sister in the hallway, preparing myself for the meeting of Charles. Emma warned me that he might lay it in on me for being rich and famous, and for being her boss. She wasn't too amused when I said that it would be just like meeting her for the first time.
The oven beeps just as Charles walks in, his arms spread out in greeting. "There he is! And look at him, slaving away in the kitchen!" He grins, holding out his hand. I shake it with a firm grip, getting an equally tight one in return. He must be around the age Aleran would have been and besides the dark hair and the square jaw, that's where the resemblence ends. Still, I find myself disliking him instantly - a default response, modeled after the relationship I had with my brother. I push it away, reminding myself that this man isn't Aleran and that he deserves a fair chance.
"It's good to meet you, Charles."
"It was high time!" He peeks into the oven, letting out an approving whistle. "I needed to meet the man who my little sister keeps raving about." Still hunched over the oven, he shoots me a sideways look. "And make sure he ain't a dick."
"Oh, then I'm worried I might disappoint you." I say casually, turning off the hob below the sauce and the cauliflower. "She did tell you I'm a lawyer, right? Being a dick is in the job description. As a matter of fact," I point at Emma with my spoon, the pale green sauce dripping to the floor. "That's why we hired that one."
"Oh, piss off!" Emma laughs, grabbing the spoon from my hand. "You weren't even involved in hiring me." She ushers Charles, who's laughing his ass off, to the dining table and helps me bring everything to the table.
"I thought you weren't technically a lawyer?" She teases in a hushed tone when Charles is out of earshot.
"I'm not." I pull the roasting tray out of the oven. "But he doesn't need to know that."
"You honestly need to tell me that story one day."
I laugh, pressing a quick kiss to her temple. "I told you back then, Em, I need to be a specific kind of drunk to tell that story. And, for the sake of your brother, I'm not doing that tonight."

"Ah, Emmie..." Charles leans back in his chair, stretching out with a satisfied smile on his face. "I have missed your roasts. They might be even better than mum's."
"Don't flatter me." says Emma, who's clearly enjoying the compliment. "And you better have room left for dessert!"
"I always have room for dessert."
Emma gets up to clear the table and when I go to help her, she waves for me to sit back down. "No, no, I'll manage! You boys chat, go for a smoke or something! And Charlie -" She gives her brother a stern look. "No interrogations."
He holds up his hands in innocence. "I wouldn't dare!"
We happily take the idea of a smoke, though, and not soon after we are standing on the tiny balcony with a cigarette in hand.
"So, Lucien." Charles starts, to no surprising the promise he wouldn't interrogate. "What got you to our beautiful Scotland? Can't have been the weather."
I chuckle, shaking my head. "Fuck, no! It was work - the position I hold here had recently opened up and it seemed like a good opportunity."
While taking a drag of his cigarette, he nods, though he's frowning. "Why Scotland, though? Why not stay in France?"
Because I needed to prove my father wrong. I shrug. "France gets boring. They're not all as fun as me."
"So they're even worse? Ha!" Charles laughs, clapping me on the back. "I like you, Lucien. You're not half bad."
I grit my teeth. The slap reminded me of Aleran, who did the same thing one too many times, but it was always followed by a patronizing comment. I tell myself that that's not the case here, because there's no reason to believe it is. Charles seems genuine. "You're not half bad yourself." I reply with a smirk. "I can see why Emma won't shut up about you."
"Oh, would you look at that!" He leans his elbows on the railing, laughing warmly. "And here she's always saying she's too embarrassed to talk about me!" He looks at me, his face half hidden in the darkness of the night, the lights from the window throwing shadows across his features. "You have any siblings, mr big boss?"
At the nickname I chuckle, and I almost go to shake my head when I catch myself. "A sister." I say instead. "Much younger, she's only seventeen."
"She here?"
"No, she's still in school. Though she did make a fun surprise visit a few weeks ago."
He snorts. "That must have been a fun call to her mother."
To stall my reply, I flick my butt into ash tray, just when Emma opens the door to call us back in with the message dessert is ready - meaning I'm saved from replying all together, which is just fine with me. Gathered back around the table there is a gorgeous peach cobbler waiting for us that Emma and I made together. Charles hovers over it, inhaling its scent.
"You truly know how to please a man, Emmie." He goes to break off a piece of the crust, but Emma raps his knuckles with the pie server.
"Be patient! Who taught you manners?"
"The same people who failed to teach you yours." He quibs back without a second thought, causing them both to laugh. I watch the picture with a smile. Sometimes I forget that this is how it's supposed to be - and more so, that it's actually possible to be like that. It's so clear to see that Emma loves her brother and he loves her just as much.
"Oh, wait wait wait wait!" Charles exclaims, just as we're about to take our first bite. "Before I forget! I taught myself some French."
Emma raises her brows, unimpressed. "Isn't that lovely?"
But Charles ignores her, instead focusing on me. "Lucien, Je suis heureux de vous rencontrer et je suis excité faire ta connaissance."
I nearly choke on my sip of wine - next to me, Emma makes a high pitched squeeling sound before covering up her mouth to hold back her laughter. I'm biting down on my tongue - hard - to do the same. For a second Charles looks proud of himself, but then when a response doesn't come and he finally sees our faces, his expression falls. "What? What did I say?"
"Well," I clear my throat, glaring daggers at Emma who's still trying to stifle her laughter insted of helping me out here. There's tears in her eyes. "While I'm happy to meet you too, I can't say I'm turned on by you."
"What?" Charles only looks more confused, while Emma is truly losing it now and I can't really hold back my laugh either.
"Je suis excité means you're turned on, Charles." I try to explain, clinging to the last of my composure, while EMma is nearly below the table, dying with laughter. "Doesn't do well in combination with 'wanting to get to know me better'. You basically just said you want to fuck me."