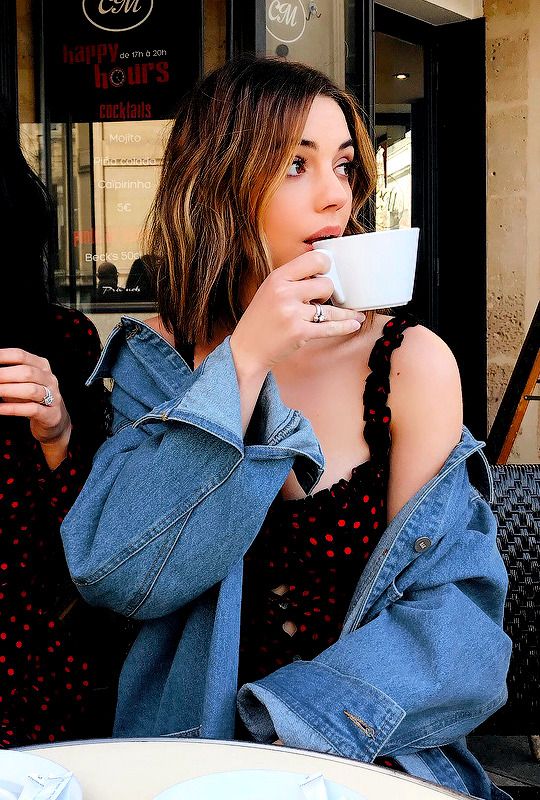 I could honestly kill Beth for coming up with this idea of asking Lucien to come out with us. We hadn't even discussed the bistro, so this must have been mulling around in her brain ever since she found Lucien on the couch.
Sun's beaming in to the appartment as I sip my coffee, coming to terms with the fact that Lucien will be joining us for breakfast.
"Okay, enough with the peace and quiet," Beth pretty much shots her coffee, though probably still hot, and connects her phone to the little bluetooth speaker in my kitchen. "Any song requests?"
I recognise the naughty sparkle in her eyes as she starts typing, not even really waiting for an answer from the both of us because she probably already knows exactly what to do.
"How about some eighties jams, huh?" I see her scroll through a long playlist, the corners of her mouth creeping up as she clicks a song. The guitar riff immediately gives it away, and if it wouldn't be seen as very weird, I'd smack the phone out of her hands.
Lucien doesn't seem to notice the song of choice until Rick Springfield starts singing about how he wants Jessie's girl, Beth tapping along as she pretends she didn't specifically pick this song to mess with me.
"I'm going to take a shower," I grumble, leaving half a cup of coffee on the counter. I know it's probably a terrible idea to leave Beth and Lucien in the same room, because God knows what crazy things she's going to be spewing, but I also know I need a shower.
As I turn the water on, I can still vaguely hear some eighties music playing from the kitchen, drowning out the possible sound of conversation. It's a dangerous situation, but one I'm going to have to deal with.
Being in the shower alone only gives me more time to think, which probably isn't the best thing to do right now. I can't stop thinking about last night.
In a slightly drunken state, I was sure I'd imagined it, but now I'm doubting that. Was I misreading things, or were we actually about to kiss? I remember our eyes locking, and my body wanting nothing else but feeling his lips on mine.
My dreams are also slowly coming back to me, and with the hot water streaming down on me I'm only feeling more and more wound up, trying to erase the visuals from my head but having them sneak back in as soon as I stop pushing them away.
I can't believe it's come this far, I can't believe I'm really still this hung up on him, still so madly in love with him.
I've accepted it now, the only thing left to do is make sure I don't act on it. It'd be a bad idea. But I don't want it to be. I need it to be a good idea, because my body is aching for his touch, for him to wake up in my bed again in stead of on my uncomfortable sofa, for him to wrap me in his arms and press a kiss to my temple to truly calm me down more than anything else ever has.
"Em!" I hear Beth's voice call out, combined with her knocking on my door rapidly. Normally, with anyone else, I'd think something was up, but this is just who she is and what she does. "Are you going to come out any time soon? I'm starving."
I turn off the water, wrapping myself in one of my soft, blue towels and unlocking the door. "I've been in there for five minutes, calm down."
"Actually," she holds up her phone, showing a timer. "Twelve minutes, and couting. What happened to saving water?"
I roll my eyes. "I'm going to get dressed and I'll be ready."
"Told Lucien he could take a shower too," she smiles, "or if he wanted to save water, he could just hop in with you..."
I am about to slap her with the towel currently in my hair, but she just shrieks of laughter. "Messing with you. He's out on the balcony having a cigarette."
I get dressed as quickly as I can, because even though Beth was just playing with me, I know she will actually say something wild if I leave her alone with Lucien for much longer. Maybe she already has, she just hasn't told me.
"Ready?" I put on my denim jacket, the other coat still wet from last night's sudden rainfall.
Beth is the first to jump to her feet, and only now I notice she's wearing one of my dresses. She must realise I noticed, because she shoots me a grin and walks over to the front door.
"Do I need to bring a bag or is Lucien paying?" she pretends to ask me, but looks over her shoulder to face Lucien, who's making his way to the door as well. He smiles, shaking his head.
"Is that why you've asked me to come?" he pats down his pockets, as if to check if he's got everything.
"Don't worry, Lucy," she smiles, "I actually really do like you," she goes to link her arm with his, something that must catch him by surprise but he still goes along with. "Even if you didn't have any money, I'd still ask you to come with us... I'd just make Emma pay."
I grab my keys from the bowl next to the door, playfully rolling my eyes at the duo in front of me. "Don't feel obliged to pay, she's just messing with you."
"Am not," Beth shoots back, "but she's right, don't feel obliged to pay for Emma, she makes her own money. I, on the other hand, make a little over seven pounds an hour folding clothes, so you should definitely treat me, your favourite sister in law."