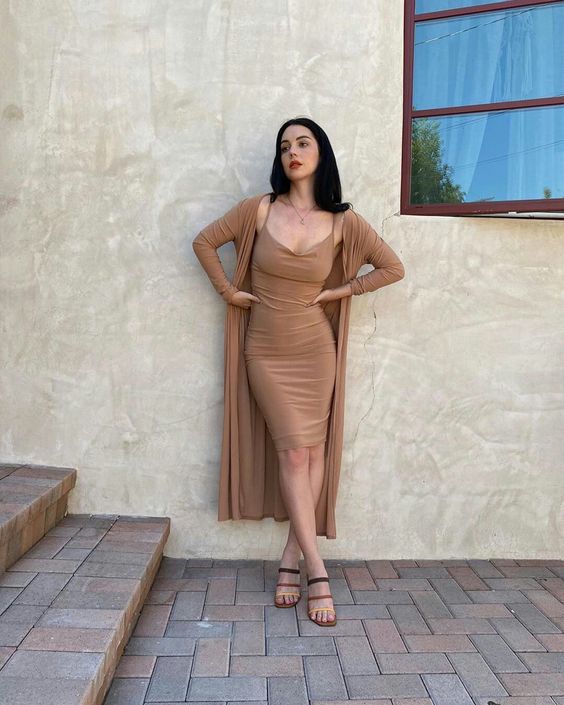 They've all shown up at the exact same time, because of course they have.
I may have been nervous before, those nerves have all disappeared. Now, there's just our friends, coming over for dinner.
A ridiculously over the top dinner, with multiple courses and paired wines, but a dinner nonetheless. As I lead them into the main area of the house, for what's probably the last time, I feel like this is just... right.
"Luce," I tell him, my voice audible even in the kitchen because it's only a few steps away, "you can go change now, just turn the fire on low."
All of our friends look amazing. Formal, but not quite party attire. Just... photo ready, which is probably something Gabriel assured, because if I know something about Brie, it's that he loves to take pictures, and tonight is a perfect occassion for that.
Speaking of which, Brie is currently already on the floor of my livingroom, hanging out with Frank, who's rolling around.
"It smells amazing," Kenna smiles, letting herself fall down on my couch. "Totally worth paying an overpriced babysitter for."
I chuckle, hearing Lucien walk back into the livingroom. "As I've told you," he smiles, "I'd be more than happy to pay that for you."
"And as I've told you, Lucien," Kenna shoots back. "I'm not letting you. Now, I was expecting to already have a glass of wine in hand by now... Such lousy service."
Lucien raises his hands, leaving the room and coming back only a minute later with two glasses of wine. "Dry white for the lady," he hands Kenna her glass, "and for Brie, a glass of ice cold rosé with ice cubes. Matt, Tom, what would you like to drink? Emma made sure to get every possible kind of wine ever, and we also have beers, and a very nice whiskey."
The men, excluding Brie, disappear off into the kitchen, as Brie, now sat on the couch, looks at me expectingly. "So what's this dinner all about?"
I pretend not to know what he's on about. "Just dinner with friends, nothing more and nothing less."
He lets out a sigh. "Do you really expect me to believe that, Emmeline Middleton? Since when do we do dinners like this?"
"Since we like them," I shrug, "Luce and I just really wanted to cook for you lot, is that so weird?"
"I don't trust it," he just admits, smiling at Kenna. "What about you, Kens?"
"Not for a second," she laughs, cheersing her glass against Brie's.
I sigh, leaning my hands on the back of the couch. "Let me guess, you have already placed bets on what's going to happen tonight?"
Kenna places a hand on her heart, dropping her jaw almost to the floor. "I would never participate in such scandalous behaviour!"
"Kenna's not in on it," Brie assures me.
"So there is a bet going on?" I read between the lines, causing Brie to get a little red in the face.
"I'm legally not allowed to say," he answers me, a naughty smirk on his face. "But I'm pretty sure I'll win."

"They've got bets riding on this night," I whisper in Lucien's ear as we're getting ready to serve our starters. He's neatly placing the quiches on the plates, sighing as I tell him my findings.
"Of course they do," he makes sure everything is perfectly centered on the plate. "Like I said, I don't think there's a single thing they don't have placed their bets on."
"Do you think they'll be surprised?" I've been kind of nervous about telling them about the whole moving in thing. They shouldn't be surprised about us being back together, because it's quite obvious, so us telling them will only be confirmation for them. Moving in together, however, is a big step, and I'm curious to see how they'll take it.
"I think at least one of them has bet that's what we're about to tell them," he shrugs, wiping a crumb away. "So maybe not a full surprised, but I think they're still curious to hear what we've got to say."
He must be able to tell I'm nervous, because he wraps an arm around me and presses a kiss to my cheek. Even from the kitchen, I can hear Frank meowing, scratching at the door to my bedroom. We've put him in there because he is very food driven, and will definitely jump onto the table and steal whatever it is he can find, but he doesn't seem to appreciate it too much.
"Just promise me," I ask him, leaning my head against his shoulder, "that even if one of them doesn't seem to be too happy about it, we'll keep it positive tonight. We both agree with this decision, yes?"
He smiles, kisses the top of my head and nods. "I've never agreed with a decision more. If they need time to come to terms with it, that's up to them."
It doesn't reassure me for a full one hundred percent, but it's enough for now.
We both carry plates out, Lucien does two at a time whilst I do four, lucky to be blessed with experience in serving from the job I had when I was seventeen, and our guests immediately compliment us on the dish we've served without even having tasted it. They'll love it after they've tasted it, too, because we've tried out this recipe before and it's an absolute winner.
Before digging in, Lucien pours all of us a wine that's perfectly paired with this course - a sweeter, yet dry, white wine. "First of all," he starts before having finished pouring his own glass, "on behalf of both Emma and I, I'd like to thank you all for coming. I know it isn't quite the five star experience some of us," he looks at Brie, who sticks out his tongue, "are used to, and that it might be way too fancy for others. But... we're just really grateful to have you guys in our lives, and we decided you should be the first to hear what we have to say."