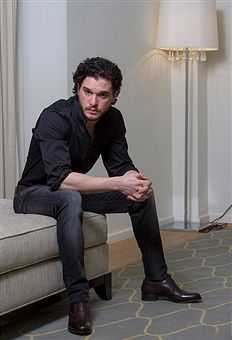 "How long until you're back after this?" Emma's head is in my lap while I'm sitting up against a tree. Its rough bark pokes my flesh uncomfortably, no matter how I shift or turn my body. I've given up as not to disturb Emma. The tree provides a nice bit of shade; necessary after we came to the conclusion that we'd forgotten to take along sun lotion. Emma blamed me for it, because she got distracted by me this morning. What followed was another chase-around, until I got her pinned against this same tree we're now sitting under. It had been very tempted to go home for the kiss that Emma initiated while trapped there, had it not been for the little kids that loudly started asking their parents what those two adults were doing.
"Two weeks." With my nail I'm drawing little figure-eights on her forehead. "Twelve days, to be more exact. But I'm flying out to France on Monday and will be staying in the manor. You could come stay there with me."
"Hmm..." Her eyes flutter close, a soft smile on her lips. "I've got work until Thursday, I can hardly disappear in the last week. Can't say it's not tempting, though."
"So fly out on Thursday." I reply, tapping her nose. "We'll have a long weekend in France, longer if we want it to be..."
"Are you taking another break?" Her eyes open again, the light brown of her eyes catching the light in a way that almost makes her irises seem liquid. I shake my head.
"Not... quite. I asked Eailynn if she could plan some things closer to home, or that can be done remotely. And Matthew asked me to work out some legal things for his company before the launch at the end of summer. So I'll be working, but I'll be at home." I trace my finger over her lips now, and she catches it between her teeth briefly, immediately letting go again.
"Home France, or home Edinburgh?" When she asks, there is no worry to it, no fear of a disappointing answer; it's a genuine question with both options being accepted.
"I'm not sure yet." I say honestly. "I really need to touch home base for a while, but I might not be there for long if you'd rather be here. Then there's the matter of our possible summer travels..."
"Have you not travelled enough?" She teases. "How many hours have you been on a plane this past few months?"
"Too many." I chuckle, letting my head fall back against the tree. "But we don't have to fly. We could make it a road trip. Through France, to Spain and Italy. Or through Germany, to Switzerland or the Czech Republic... We'll have good music, make sure we've got plenty of snacks and a map so we don't get lost. Or," I add with a smile. "forget the map and try our best to get lost, so we get to see places we otherwise would have missed. The possibilities are endless."
"While all of that sounds amazing, I have a request to make first." I raise my brows at her in question and she rolls on her stomach, propping herself with one elbow while the other arm reaches out to touch my face. I feel her cool finger run below my left eye, where I know dark blue circles run. "Stay in one place for a while to catch up on sleep. I know you can't sit still for long and I also know you can take care of yourself, but... Vacation is supposed to be relaxing. And in the case of a road trip you're going to be behind the wheel a lot, since we both know I don't drive."
I smile, curling my fingers around her wrist and pressing the pad of her finger to my lips. "I promise." I say sincerely. "It's going to get less crazy anyway when I'm back in France. I promise to catch up on sleep."
"In that case... I'll think on the road trip. And coming to France." She leans up where I lean down, lips meeting in the middle. No kids yell this time, but we're both extremely aware of our surroundings.
"I think we should head for groceries." I say, throat feeling tight.

I'm convinced she makes a point of driving me mad while we're in the grocery store. Little touches, delicate flirts like biting her lip, her hand brushing where it very much shouldn't brush considering we're still in public... I happily return the favour, pulling her flush against me in deserted aisles and immediately letting go again, pressing kisses to that spot below her ear I know makes her knees go weak, whispering in that low French voice she loves. By the time we finally get back home, we're both ready to explode.
"Lucien." Emma breathes, glaring daggers at me as I insist that we need to put the groceries away first. "I'm going to kill you."
"I'd like to see you try." I smirk as I push a carton of soy milk to the back of our ginormous fridge. "I've got you beat twice in the last six hours."
"Don't challenge me, Du Castellon." Her voice is low, sending a shiver down my spine. "I might switch the spoon out for a knife."
"Again, Miss Middleton..." She's on the other side of the kitchen island and I lean my fists on the cool marble, raising my brows on her. "I'd like to see you try. Now, be good and let me put our food away."
It's her footsteps that give her away; I hear them approach me from behind after I've turned back to the fridge, and a second later she launches herself onto my back. One arm is tightly locked around my neck, the other hand knotted in my hair to pull my head back. Her legs are wound around my waist, which in a reflex I go to support.
Her sultry voice, her breathing against my ear, it's nearly my undoing; my eyes fall close as my body is set aflame. "Your move, Lucien."
"As you wish, Miss Middleton." I grin; I bend and hitch my body in a way that forces her to let go or she'll fall. She yelps, landing on her feet with a soft thud before trying to make a break for it - but not really, because it's far too easy to grab her wrist and pull her back into me. "I think not." I breathe, angling her face up to mine before kissing her. She shudders, roughly pulling on my shirt. In a swift movement in which I lift and she hops she ends up on the kitchen counter. Her legs wrap around my waist again, pulling me against her. I lock my arms around her and hers come around my neck; lips still locked together I move from the kitchen to the living room, where I toss her down on the couch none too careful. "Remember, babe." I smirk, shedding most of my clothes before lowering myself over her. "You asked for this."