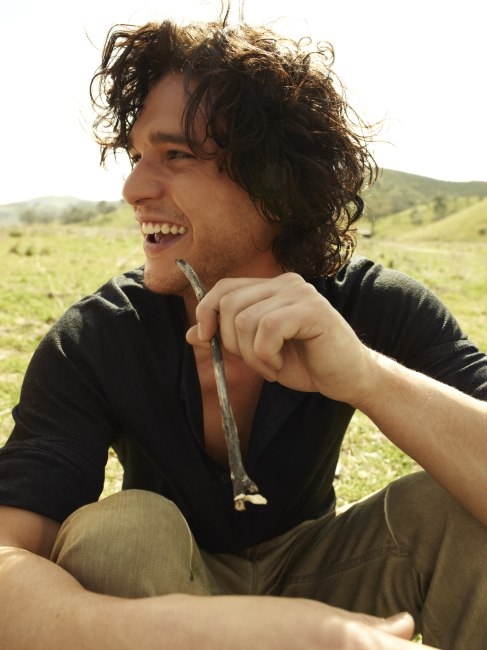 Come the morning I am in a worse mood than Emma. I'm not very good at hiding it: when I want to take my coffee mug from under machine, Emma snatches it away first.
"Penny for your thoughts, thoughts for you coffee." She says. It doesn't come out unkind, but it's not a request either, until she adds: "Please?"
It causes a brief chuckle to escape me. "I just can't get what you told me last night out of my head."
"Is this about Callum?" She hands me my coffee, of which I take a grateful scalding hot sip. "Or about that wanker at the restaurant with a dick less impressive than his success with women?"
I nearly choke on my coffee, some of it spilling out of my mouth; I catch the drips with my hand, Emma just watching me with a cocky grin. "Funny." I croak, wiping my chin clean. With a laugh she takes my cup from me, lest I drop it, before helping me clean up the drops I missed.
"Well, I figured it'd be better to laugh about it than to get hung up on it. In the end he's the sad one, not me."
"You are absolutely" I get distracted by her licking her finger clean, which takes much longer than it has to. "right." I finish, clearing my throat, and her grin widens. She follows me outside, where it's already getting too hot to sit too close to each other, but we ignore that and sit down on the couch together.
"But all jokes aside, love, let me emphasise this. I'm okay. What happened yesterday was bad, and what happened with Callum might have been worse." She pulls her legs up on to the cushion, skin significantly more tan than it were a couple of days ago. "But I'm okay. Chances are I never have to deal with Callum again, that bloke from yesterday isn't going to risk his fragile masculinity by approaching you a second time. I don't want to ruin this amazing holiday by dwelling on it. I want to enjoy my time with you in every way possible."
For a couple of seconds, I can only look at her with admiration; it only stops when her cheeks turn pink and she asks me: "What?"
"Nothing." I smile. "I just love how I didn't actually tell you anything, and you somehow hit the nail on the head anyway."
"Well, it's not that hard, is it?" She leans over to kiss the corner of my mouth. "The only thing to get you this kind of grumpy, are the toxic men in my past life. You might not like to hear it, but you are really quite predictable at times."

Despite Emma saying that she's fine, I find myself making sure that we don't see a lot of people in the following days. It's not entirely conscious, but when I catch myself doing it again by wanting to rent a private boat to go a couple of miles off the coast to dive around a shipwreck supposedly entirely overgrown with corals, instead of a far cheaper but equally effective group trip, I force myself to snap out of it.
It turns out to be an amazing trip: it also covers whale watching and while they dont get very close to the boat, its a sight to behold even in the far distance. Halfway through we are approached by two girls Eschieves age, recognising both of us. Im very apprehensive at first, considering that the most popular questions of this time are either about Ezio or Callum, but they prove to be just two sweet fans who happened to know us from Instagram. In a way its actually quite nice to have some other people to chat with. They accompany us when we start snorkeling around the shipwreck, but we lose touch with them when we get ready to actually dive. The ship has anchored nearby for a couple of hours, giving us plenty of time to explore the wreck and the beautiful nature surrounding it. Despite being strongly advised against, Im extremely tempted to enter the ship that has fallen in disarray after being submerged for so long. Just when Ive decided to do just that, Emma draws my attention by grabbing my wrist. A little bit in the distance, still half blue shadows, two gigantic sea turtles come swimming towards us. They float lazily over the underwater current, not bothered by the two humans hovering nearby. Neither I nor Emma dares moving, worried we might scare them off. We can only watch in awe as these majestic creatures go about their regular lives among the colourful corals and fish. I'm not sure how long we stay there, Emma's hand still clutched around my wrist, but by the time the turtles have disappeared again within the seaweed, our oxygen tanks announce that it's time to go back up. The guide on the boat tells us that turtle sightings are relatively common here, almost making it seem like the spectacle isn't worth of the magical feeling it gave us.
"In the past year there have been a couple of manta sightings." He says in broken English. "They don't frequent often, but when they do it's like Poseidon's blessing."
My heart flutters hearing that, and there's a part of me that wants to get right back in the water. "They've been my favourite animal since I was a child." I tell Emma when the guide has gone. "When I was younger, and still convinced I was going to die with every inch of my body covered in ink, I always wanted a manta ray tattooed to cover most of my back and shoulders."
While not conclusive, I'm pretty sure that Emma's soft smile as she gazes out over the vast blue ocean means that she's relieved that back piece never happened. "What made you change your mind about tattoos? Because now you don't have any."
I shrug, leaning my forearms on the railing. The sun is starting to set, colouring the skies all kinds of pink and orange. "I don't know. I never got to getting the first one done, couldn't decide where I wanted to start. And then as I got older, I no longer felt a need for them like I did as a teenager. Just got wiser, I guess. There's an itch whenever I meet someone who's just gotten one done, so maybe one day. Wouldn't know what to get, though."
"You could get my name." It comes out so serious I need to check her face to make sure she's kidding: judging by the smirk on her features, she is.
"Oh, definitely. Your full name as well, right over my heart. Maybe a portret of you on my upper arm? A banner under it with 'toujours et à jamais'?"
"Sounds like an excellent plan." She laughs, stumbling as I shove her. I make it up to her by pulling her back into me, laying an arm across her shoulders and kissing her temple. She leans into me with a content sigh.
"I think we should go to Lisbon soon." She says. "For a couple of days at least. Do some sightseeing, learn some history."
I smile down on her, nodding. She could say just about anything right now, and I'd agree. "I'll contact Row when we get back to the apartment."