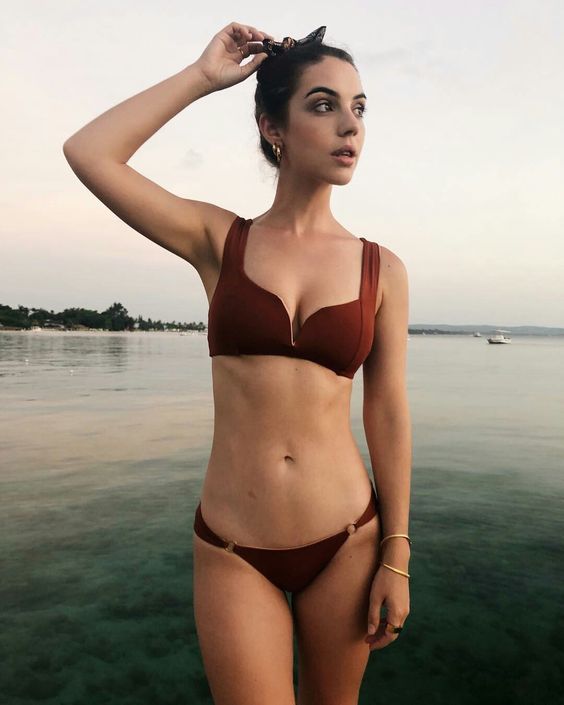 There's pictures all over the internet, we realise, as we both check our socials for the first time in what feels like forever. We'd made a deal to keep the whole social media thing to a minimum, but after finally having sat down for dinner, we allowed ourselves an entire five minutes of shameless browsing.
"I really do look like a vampire next to you, my god!" I exclaim, spotting a picture that, judging by the outfit, was taken yesterday.
Lucien, across the table from me, chuckles. "Don't worry, love. After that gorgeous red glow has peeled off, you'll be slightly more tan."
"That's not how that works for me, Lucien. Once this burn has faded, I'm back to fifty shades of white and people will start using me as a colour example for their walls again," I sip my white wine, topped off with ice cubes and a sprig of mint.
"Well, just know I still think you're gorgeous either way," he's still scrolling, double tapping his screen from time to time. "Even when you resemble the living dead."
I chuckle, shaking my head lightly, drink still in hand so it makes a dangling sound as the ice cubes swirl around in my glass, bouncing against the sides. "Thanks for the reassurance, baby. I don't know what I'd do without you."
He holds out his phone for me to see, a smirk on his face that tells me he's holding back laughter. "Seems like the universe isn't the only one giving us signals."
There is a picture of the two of us, from yesterday. I'm wearing a baggy shirt, covering up my burnt skin, and am holding a bag with several souvenirs in front of me. You could say it's strategically placed, which is definitely what this gossippy page has decided to mention in their caption.
Lucien du Castellon and Emma Middleton spotted in Lisbon, France. Despite the burning heat, E's still sporting baggy clothes and skillfully hides her stomach - a tiny du Castellon on the way?
"God, will people stop either wanting me to be pregnant, or claim that I actually am?" I roll my eyes, Lucien having lost his breath in a fit of laughter. "There's literally photo's from me in a dress from the day before, or me in my bikini! They've gotten shots of us drinking! How would I possibly be pregnant in a day's time, and pregnant enough to start actually showing?"
Lucien's wiping tears from laughter from his eyes, holding on to the edge of the table with his free hand. "Sorry, love, this is just really funny."
I crumble up one of the many napkins, chucking it his way. It hits him in the chest, and I smile thriumphantly. "Ha. You'd better stop laughing, du C."
He tries his best to contain his laughter, getting his breathing back to regular, though the smirk remains. "Want me to post something about it? Debunk the obviously fake rumour?"
I shake my head as our set timer signals the end of our five minutes of social media. "I'll do it." I pick a photo I've just had Lucien take of me to send to Kenna, who is oh so curious to know what we're doing, and post it to my story. It's a simple picture, my good old pose with a big smile and my eyes squeezed slightly shut, a glass of wine and our appetiser in front of me, and I add a little bar of text to it, simply reading 'not pregnant, just sunburnt and eating good. x'

We get back to our appartment, full from the extravagant dinner we've had, and slightly tipsy from the drinks paired with that dinner.
"I'm waiting," I say, a fake serious tone to my voice as Lucien has opened the door and has simply walked in.
"What for?" he asks, a little confused, his head tilted.
"Well, considering this is our honeymoon," I refer to the note left with our champagne in the cabana and the wait staff at the restaurant asking us how we're enjoying our honeymoon. "Aren't you supposed to carry me over the threshold?"
He laughs, shaking his head at me as he makes his way back outside. "If this is our honeymoon, shouldn't I have done that the very first night? Not to burst your bubble, but we're already halfway done with our trip."
I place my hands in my sides, giving him a stern look. "Look, Lucien, I don't know about you, but I fall in love with you over and over again, every single day. Which means every day should be treated as our honeymoon. So unless you disagree with-," before I can finish my sentence, he has lifted me up in his arms, and in three firm steps has carried me inside.
"You know," he says as he gently places me down, "that tradition is actually really fucked up? It's based on Roman mythology, when a bunch of Roman soldiers abducted and raped a bunch of women. Literally just scooped them up and carried them off against their will. And then what did the Romans do? They turned it into some kind of tradition for every wedding, where the bride had to run away from her groom and the groom and his friends intercepted her and dragged her away, after which she'd be carried into the house by not only the groom, but by a group of people."
"And why do you know this?" I say, a look of horror on my face as he just states these facts.
"Expensive education, my love. Was forced to take Latin, and they teach you all about the horrible things the Romans did," his eyes sparkle. "Sorry for ruining that for you."
I shake my head, smiling. "It's alright. Guess we'll just have to come up with some other traditions for when we get married, yeah?"