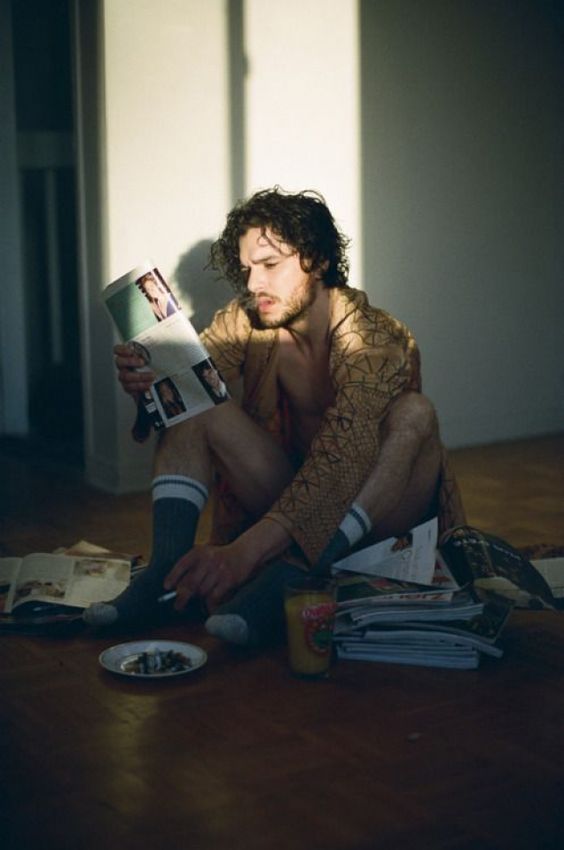 The ticking of the clock is awfully loud as I try to remember what she's talking about. There's bits and pieces, though none of them connect properly to make a cohesive story.
"Is this like you getting drunk and then demanding I put a baby in you?" My voice is raspy, even with the water I just chugged, and I feel like I've been run over by a train. Emma's laugh makes me flinch, as does Frank's loud meowing when I go too long without giving him attention.
"That depends - do you remember getting on one knee last night?" She wiggles her fingers at me, that sickly sweet smile still on her lips. "You seemed rather certain."
When the wiggling stops, I see the ring of dark metal around her middle finger. It's in sharp contrast to the ones right next to it of delicate gold. "I'm sure I did." I chuckle, sitting next to her. With the prompt, more bits and pieces come back to me: my wobbly stance, me ripping the ring off my costume, and Emma's demand: that I had to do it again when sober. "I taste garlic." I mutter, resting my head in my hands. "Please tell me that awful cocktail was a nightmare and it's just my brain manifesting it."
Emma shudders so violently that I feel it rather than see it, , and the realisation of it being something I actually took a sip off is enough for my stomach to decide it's time to purge.
"Do excuse me." I croak, hurrying out of the kitchen.

By the time I get out of the shower, my two aspirin have kicked in and my head feels a little clearer. I manage to get a cup of coffee down, but the first bite of plain toast doesn't sit well with my body and for fifteen minutes, I'm scared to move from my spot on the couch.
Frank has made himself comfortable on his favourite spot, being my feet, which is just fine for me because it gives me another excuse not to get up from the couch. Emma has joined us there, still grading essays. Her expression grows more sour by the minute. Eventually I intervene by stealing her pen.
"Lucien. Give that back, I have to do this." She tries to sound stern, but her heart isn't in it. I dangle the pen over the edge of the couch, an annoying bit of dead space that has already eaten numerous cat toys and magazines, because we just cannot be bothered to retrieve them. We've been meaning to buy something to fill up the void, but never get to it.
"Come and get it."
She raises her brows at me, unimpressed. "You are inviting me to crawl over you? In the state that you're in?"
"Yes?"
She laughs, outstretching her hand and beckoning with her fingers. "Give me the pen, babe."
I'm about to when I notice the metal ring again, and before I hand her the pen I grab her hand with my free one. "Are you going to keep wearing that?" I ask with genuine curiosity.
Her eyes fall to the ring, a soft smile curling her lips. "I dunno. I might. I kind of like what it represents. Like a promise ring."
I snort, tossing her the pen finally. "Here I am, laying awake thinking about which rings to buy for you, diving deep into my life savings, and you're happiest with a steal ring coming from a cheap Halloween costume."
"I highly doubt your costume was cheap." She notes with a laugh, pulling her hand free. "And I've told you before: it's not about what you buy for me. It's about what it means."
"So steel jewellery from now on." I confirm with a nod. "Noted."
She shoves me with her foot; it disturbs Frank, who complains loudly and painfully by putting his nails into my ankles as he tries not to fall off. Emma didn't include the scars that cat gave me as she explored my body a couple of weeks ago, because if she had, we'd still be in that bed today.

"You know, I don't get you."
"Hmm?"
She's leaning on the closed lid of the piano with her elbows, a glass of iced tea dangling from between her fingers. Her hair cascades over her shoulders, all pulled to one side, and there's deep circles under her eyes that betray that she, too, is not feeling the best after yesterday. "You've been complaining about noise all day, everything is too loud for you. You wouldn't even watch Bake-Off with me, because the intro-music made you dizzy. And here you are. Playing the piano."
"Seems quite ironic, doesn't it?" I smile, continuing the gentle tones of Yiruma's 'Kiss The Rain'. "I dunno. The piano has always been the one thing that never overwhelmed me. Kind of depends on the piece you play of course, but generally..." I purse my lips, frowning, and I see Emma raise her eyebrows at me expectantly. "Not entirely true." I correct myself. "The harp used to be like that, too, but I never played that myself. My mother did. I'd sit in the music room for hours, listening as she practised and played."
Emma's smile is warm, compassionate, though she doesn't offer a reply. She doesn't need to. Instead the music surrounds us, somewhat suppressed by the closed lit, but still echoing through the living room. When the piece is finished, Emma nudges a glass of water my way, reminding me I should drink. As I take a sip, I scoot over on the stool. Join me. And she does.
"How long since you've played?" I ask her softly. At the question, her eyes fill with surprise, but they quickly soften.
"Not since Louis died."
"I suppose that means we won't start with Mozart, then." I tease. "Place your left hand on the keys for me?"
She does so, and I do the same. "Repeat after me."
"Babe, it's been years -"
"I know, I know." I ease her with a smile. "It's going to be real easy, I promise. I wouldn't be surprised if you've played this before." I show her three sequences of three different notes, always following each other in the same pattern. She picks it up quickly, though she doesn't seem to recognise it quite yet. "Keep playing them." I instruct gently. "And I'll pick up the right hand."
I hear her breathe a soft oh the moment I've played the first bar, and just like that we're playing the beginning of Für Elise together.