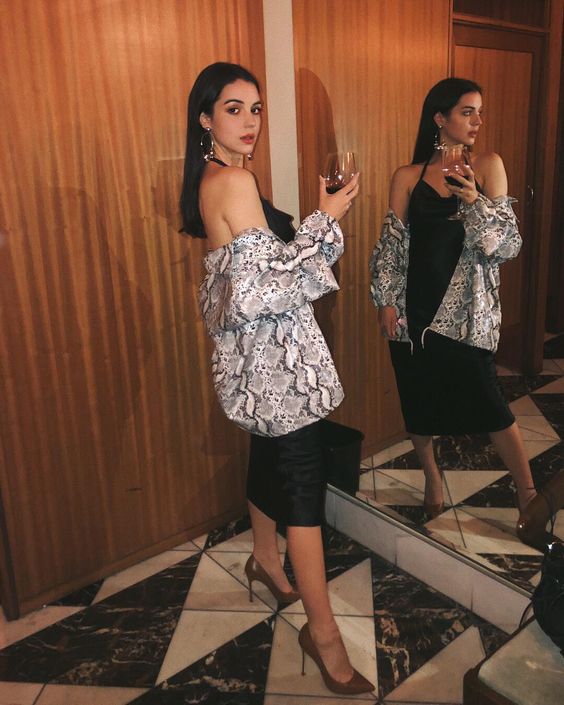 "No, no, we should go," I assure him, still shaking the cold I brought in with me from the outside off, "I just won't drink too much."
The weird bug I seem to have picked up somewhere around Christmas is lingering, though not as awful as it was before. I woke up sick to my stomach the day after boxing day, puking my guts out for a good hour, and after I felt fine. A little weak, but nothing a few vitamin supplements and some rest can't fix.
"Sure? The boys would understand if you want to stay in," he reminds me, reaching over to hand me a cup of tea.
"Very sure, mister du Castellon," I smile, "it's our first New Year's together, and we should celebrate it in style. Sitting at home on our asses watching a movie is something we can do any other night. We'll still have about two weeks together before you leave, right? Plenty of time to waste lounging around."
He smiles, rubbing my back. "Just know..."
"That if I decide it's too much or that I want to go home, I should tell you. I know that, and I'll be fine."

I don't feel fine in the hours leading up to us leaving for the party, but I don't tell him that, knowing full well he'll try and convince me to stay home.
I get all dressed up, do my hair and make-up, all whilst having to shake the feeling that I could tip over at any point. I'm not quite dizzy, just a little... shaky, I guess.
Lucien looks gorgeous as always. He could wear nothing but a plastic bag and he'd still look like a model, and I'd look like a total slob next to him even if I was wearing head to toe designer.
The sparkling jewelry around my finger makes it a little better, spicing up my average looking outfit.
Frank's not having the time of his life, like he must realise we're going to be gone for the night. It's scary, leaving him alone with all of these fireworks going off, but we've built him a little fort he can hide in around our wardrobe, and have put food out for him so he'll be cared for.
I've made a deal with myself and Lucien that I won't drink tonight, even though I've told him I feel just fine, so I'll be the one driving. Hauling a cab back home would be a disaster, and paying steep parking seems like a better idea.
"Nearly ready?" Lucien asks, peeking his head into the bedroom where I'm putting the last finishing touches to my face, wiping a stray lash from my cheek.
I'm about to answer as a whif of whatever he's chewing on hits me, making my stomach turn. "God, what is that?"
His brow furrows. "Some of those crackers we bought the other day," he shrugs, looking at the packaging he's carrying with him. "Rosemary and black pepper. Why?"
"Just..," I mumble, swallowing whatever wave of nausea came up, "a very intense smell, is all."
I knew Brie had a lot of people he calls friends, but I wasn't aware so many of them would be invited tonight. The place, usually calm, now seems crowded, and we make our way to hang up our coats as we run into Matt.
"Damn," I chuckle, looking around the room, "this sure is a lot of people."
"Wasn't my doing," he groans, though he doesn't seem too frustrated. "Gabriel just happens to know a lot of people who apparently had nothing better to do than come to our party. It's great networking, though I'd imagined it all a little differently. I'm glad you're here, though."
"Did Kenna come?" I ask, already knowing the answer before Matt shakes his head.
"Quiet night in with the baby took precedence over rich people house party," he smiles, "and I don't blame her. You guys want a drink?"
"Not me," I flash a smile, "I'm the designated driver tonight. But I'd kill for something that looks nice in a champagne glass."
Luce puts his arm around my shoulder. "I'll just take anything."
We've run into quite some people that have somewhat of a connection to either Brie or Matthew, most of them with a connection to Lucien too. There's a lot of chatter going back and forth. Some people seem really interested in Lucien or I, others just want to make small talk so they can seem interesting in photos that are no doubt being posted tonight.
We have only caught a few glimpses of Brie, being the host of the night and walking around like the social butterfly he is. When he finally comes over to us, he seems pretty buzzed, despite it not even being midnight. He's got his arm draped across a man's shoulders, moreso in a friendly way than anything else, and smiles wide when he joins us.
"Lucien, Emma, it's so good to see you!" he goes in for a hug with the both of us, glitter on his face that he has no doubt placed there himself to look festive. "This is Matteo. We worked together last year, he's a fabulous stylist. Matteo, this is Lucien, my best friend, and his girlfriend, Emma."
"It's so nice to meet you," he says in broken English, somewhat of an accent shimmering through that I can't quite place. "Gabriel has told me all about his best friend Lucien."
"All good things, though, Lucy," Brie pitches in, a sloppy smile on his face as he takes a glass of champagne from one of the nearby tables especially set up for the party. "All I can say about you are good things. About Emma, too, of course - my unrequited love, the woman of my dreams," he laughs about his own joke that quite obviously isn't a joke, though Matteo doesn't seem to catch it and just laughs along with him. "Oh, God, it's already eleven fifty-five! I should find Matthew, get the countdown and the sprinklers ready - stay where you are, I'll come find you when I'm done!"