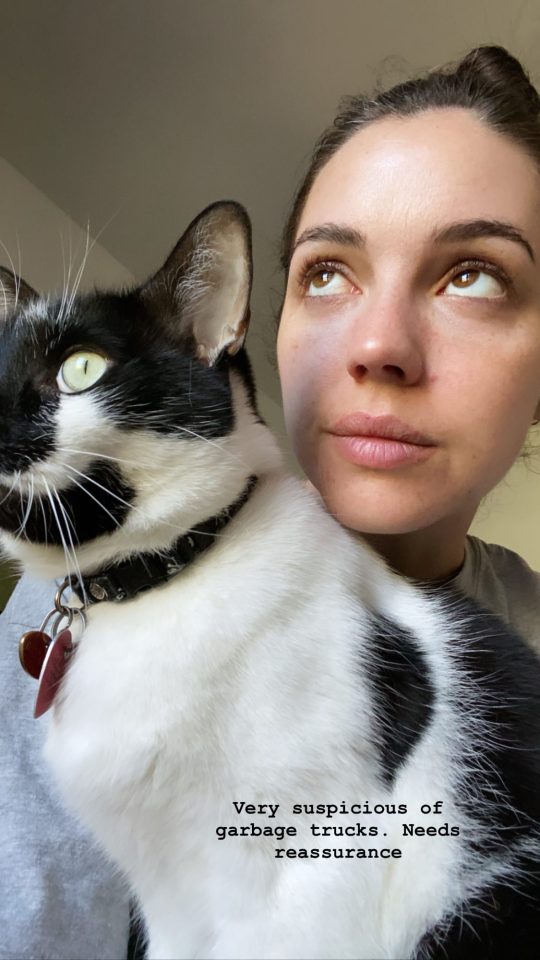 All of this is crazy. If anything, I would have expected this to happen years down the line, and we would be trying, and we'd be so happy when I finally missed a period. These tests would be heaven sent in stead of bought in a panic. Yet, here we are.
"I think," tears are still clouding my vision, but I can see Lucien through them, and that's all that matters right now. "I think we should do it."
His composure, though I know he must be freaking out internally just like I am, calms me down. Combined with the feeling of his hands around my face, keeping me safe, makes it easier to say.
"Well, that settles it, then," his smile, though small, makes my heart skip a beat.
"I'm terrified," I tell him in all honesty, a smile cracking through on my face as well. God, I don't think that even describes it. I don't think the realisation has even really hit me, my head still filled with clouds and fog.
"Oh, me too," he presses a soft kiss to my lips, the salt that was on them from my tears very present. "Mortified. But I meant what I said."
"We're having a baby," saying it out loud makes all of this feel even more real, though at the same time also feeling like some kind of fever dream I'm yet to wake up from. "God, we're really doing this."
"We are," he confirms, wiping another stray tear away. "Totally crazy."
"Insane," I add, "absolutely bonkers. But we're going to be fine, aren't we? It's all going to be alright."

The realisation hits more and more when we make our way through the day. It's still all very surreal, though with every time the thought crosses my mind, the image gets clearer and I feel less frenzied.
"You should have these," I chuck a pack of cigarettes in Lucien's direction. He's just showered, slowly looking less like someone who has been travelling for hours on end only to come home to a complete mess. "Just bought them as well."
He chuckles. "The sacrifices we make..."
"It's just so wild," I dig through my purse, looking for the old-fashioned notebook I've written all of the important phone numbers in, needing my doctor's information. I could just google it, but that plan for some reason hadn't crossed my mind until I was already scooping through the contents of my bag. "Can you believe it?"
"Oh, no," he shrugs, "I still feel like this is some kind of dream. The past twenty-four hours or so truly have been a rollercoaster."
Apparently, when you mention having taken five pregnancy tests that all turn out positive even though you've been on birth control, and one of them even displayed a suspected time of seven to eight weeks, your doctor is very likely to see you the same day.
I probably should also book in an emergency appointment for Lucien after this, seeing how I've squeezed his hand nearly to pulp.
My doctor is a friendly, greying man, who greets us with a smile before we sit down.
"Miss Middleton, tell me, what brings you here today?" he places both hands in his lap.
As per the doctor's assistant's request, I've brought all five pregnancy tests in a nice see-through bag, placing them on the table. "These are all positive," I explain.
"Ah, I see," he smiles, scrolling through my file on his computer. "I see here you were on oral birth control. That can happen, it's not one hundred percent effective, and combine that with it needing to be taken around the same time very day, accidental pregnancies can happen," he clicks his mouse around a few times, then looks at me again. "But that's not why you're here, I assume."
"I just know you're supposed to see your doctor when you find out," I shrug. "We've already agreed on keeping it - I'm just a little worried, because the test said nearly two months, and I didn't find out until just now. I've been smoking, eating red meat, drinking alcohol, coffee.. plus, I've been taking the pill non-stop."
"Ah yes, those are all very valid concerns," I immediately feel like the biggest idiot and the worst expecting mother in the world. What if I've already ruined this? "And I can't assure you it's nothing to worry about, but I can tell you that as long as you stop doing all of those things, you should be alright. Now, I see you've already taken quite a few, but it's routine that we do some tests. Just so we're sure and we can determine how far along you really are."

Two months. Eight weeks. The test was right, and so far, the doctor sees no reason for us to worry.
We are worried, though, though it's not about the things the doctor told us not to worry about. Now that the dust has settled, reality kicks in. Lucien leaves again in three weeks, unless he can postpone it.
We're going to have to decide whether or not we want to tell people yet, and who we're going to tell. My parents, Kenna and Tom - Tom first, of course, as promised - Brie and Matt, my siblings, Eschieve, and terrifyingly enough, Lucien's father.
I've taken a bath to rinse off some of the stress, though it's done little to help.
"You can't tell," Lucien laughs when he walks in on me in our bedroom. I'm in just a pair of his boxers, sideways in front of our mirror, sliding my hands over the exposed skin of my stomach.
"But this," my fingers trace from the top of the underwear to a little over my belly button, "seems to protrude a little, don't you think?"
Though he smiles, I can sense his eyes don't smile as wide. I can't blame him - underneath all of the curiosity, there's a massive layer of fear inside of me as well. He kisses my bare shoulder. "Maybe. I don't think people would notice, though."
"I hope not," I smile. "Not until we figure all of this out, huh?"