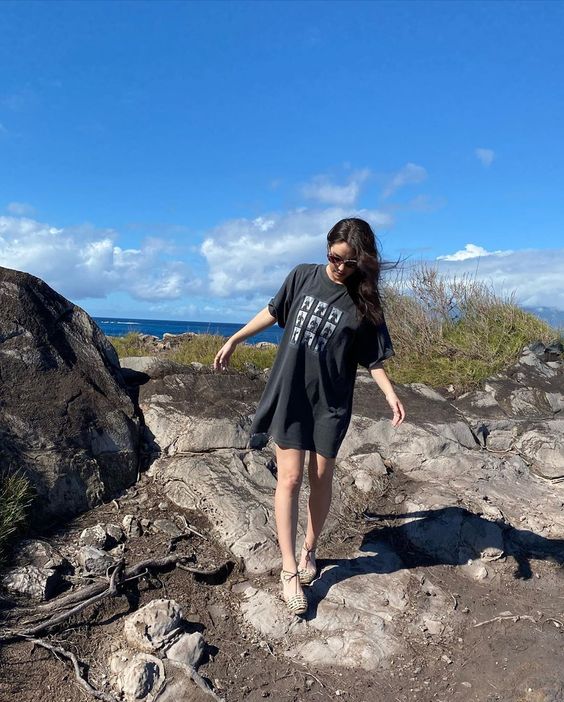 I don't tell him where we're going over drinks, simply liking the power I have a little too much. He doesn't seem too bothered by it, as he knows he'll find out soon enough.
On the morning of our departure, Lucien stands in front of our wardrobe, quite obviously not sure what to wear. Just like he did last time, I've packed his bags, all to suit the forecast - a strangely high temperature for this time of year, with highs of twenty-five degrees, which is perfect for the both of us.
"This," I slide my hand over one of his thin, cotton shirts, "and some airy pants."
"So we're not going to Greenland, then?" he asks, taking the shirt off of the hanger and putting it on. "Alaska? Russia?"
"Nowhere cold," I assure him. "Trust me, I wouldn't do that to you. All you'll have to deal with over the next two weeks is sun and a sweaty, hopefully not sunburnt girlfriend."
He smiles. It's so nice to see him smile and mean it, a welcome change from the tension that still surrounds the both of us sometimes.
It's difficult, finding a balance in this new way of dealing with each other. I catch myself wanting to kiss him sometimes, but so far I've kept myself back every time. I'm not sure why, it just hasn't felt right.
Brie will be taking care of the appartment for the time being, only because he can hang out with Frank the entire time and probably also because he still feels guilty over everything.
I've been in my underwear the entire time, postponing getting ready for what feels like hours. After Lucien has gotten dressed and I've fed Frank whilst being nearly naked, I get dressed too.
"Are you ready?" I ask him as he's leaned over his laptop, probably still doing something related to his education.
His little confession surprised me, because I wasn't aware the whole going back to uni plan was still on, especially with everything that has happened. I couldn't feel more proud, though. He wasn't sure if it was a healthy coping mechanism, but I'm pretty sure it's the healthiest either of us has shown in a long time.
Flying private still is a completely surreal feeling to me, but it's everything I needed right now and more. No people to ask questions, hardly any people around in general, just the two of us.
I make Lucien laugh when I accidentally call his pilot Ron in stead of Row, an honest mistake, and we are cheerfully greeted by the airhostess, only minutes before we take off.
"So, now that we're here," I smile, crossing one leg over one the other in the almost sofa-like seat. "I think it's about time for me to tell you where we're going."
"I'm surprised you've been able to keep it a secret from me for this long," he smiles, getting comfortable as well.
"Oh, so am I, honestly. I was ready to tell you the night I booked, but I also wanted to keep it exciting. You know, spice things up," I joke, in some sort of weird way to try and clear all of the tension in the air.
Going on a trip together after all that's happens feels weird. In our appartment, we were free to pretend we were alone, deal with whatever was going on in our own head. On vacation, it's kind of expected for us to do things together, to spend as much time together as we can.
"So at first, I was thinking we could go somewhere familiar - I thought about close to home like Bamburgh, or good old Barcelona. But..." I smile at him, reaching for his hand. After all this time, it's still weird when we touch. My body no longer rejects the feeling, but it's still strange. "Your sister called me the other day. She wanted to know how I was doing, how you were doing, how we were doing. Because she realised that - and I mean no harm by saying this - even if you were feeling terrible, you probably wouldn't tell her. We chatted for a while, just normal stuff, and then I realised..."
Mary-Lynn interrupts us by asking if we want anything to drink, and I politely accept her offer of a glass of white wine, now being off of my medication.
"So, as I was saying," I pick up where I left off after she bring us our drinks, "I realised that through this all, I've always been at home. I had my parents, my friends. And I know Edinburgh is your home, too, but it's just not exactly the same. Which is why we're leaving the UK and flying to the Côte d'Azur right now, Nice to be exact, where I've booked us a penthouse suite in a hotel with beautiful sea view close to the old part of town. I haven't got anything planned, we can do whatever it is we want to do. Swim, lay out on the beach, explore the city - there's so many museums and cathedrals, go out for dinner, take a boat out or drive up to Cannes or Monaco if we're feeling truly fancy - don't worry, I have packed for that occasion. And then, when we're done there, after however many days we want to stay, we'll be flying to Paris - because I know that's where you truly feel at home. We could stay at the mansion, or we could book some place to stay, that's fully up to you."