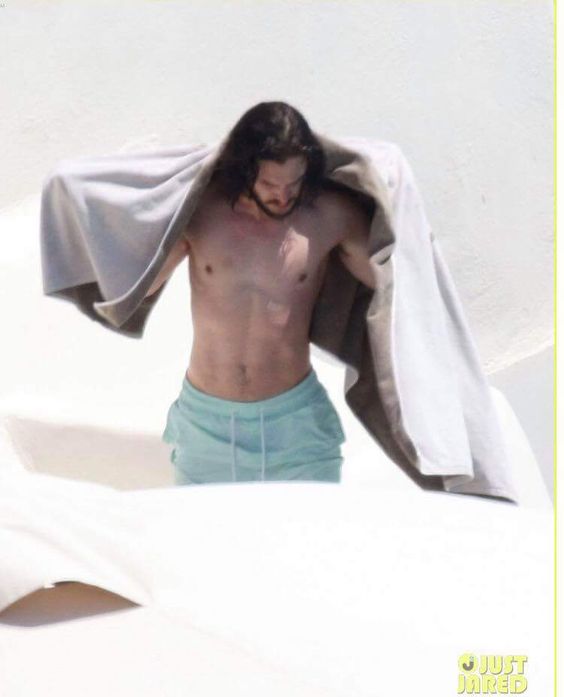 Claude looks a little skeptical when I ask when Emma can join, and so does Alex. I found out they're brothers, Alex being the oldest with his eight years over Claude's nearly-six.
"Qui est-elle?" Alex asks with his eyes narrowed. I beckon Emma over so I can at least introduce her.
"Je vous ai dit que son nom était Emma. Elle est -" I explain, but the kid cuts me off.
"Non, je veux dire qui est-elle pour toi?" He's spinning the ball between his hands. The three of us watch Emma come over; she's tugging at the edges of her bikini bottoms, though I don't think she notices she's doing it.
"Ah. Eh bien, c'est ma petite amie." I say with a smile. Claude gags.
"L'embrassez-vous?" He asks. The question makes me laugh, and I nod - even though it's not entirely true in this very moment. I hate how I keep count, but it's not hard to do so when I need only to count to two.
"Oui. Elle m'embrasse aussi."
Both boys' eyes widen, Claude's mouth hanging open. "Mais c'est une fille!" He gives a defiant look to his brother. "Je n'embrasserai jamais une fille."
"Moi non plus." Alex agrees with a nod.
"Tant mieux, car je suis la seule à pouvoir embrasser Emma. Peut-elle rejoindre?"
They both look skeptical still, if not more so now that Emma has joined our little crowd. "Est-ce qu'elle est bonne?" Claude asks. For the fact that Emma's towering over him and could easily toss him into the ocean, he looks at her with admirable spunk. I already found out he can deliver a mean kick to the shins, even though he claims the already darkening bruise on my skin is the result of an accident.
"Le meilleur." I promise him, even though I've never seen Emma play. "Mais elle n'est pas d'ici, donc tu dois parler un peu plus lentement pour qu'elle puisse comprendre. D'accord? Vous pouvez choisir dans quelle équipe elle appartient."
Next thing I know, they're bickering on who gets to play with her on their team. Eventually they come to conclusion, and Alex makes intense eye contact with her.
"Emma. Je m'appelle Alex. Il s'appelle Claude. Vous faites partie de mon équipe." He pauses after every word, staying true to my request to speak slowly, and definitely overdoing it. Emma looks a little confused by it, but at least seems to understand what they're saying.
When the games of the rules are established, she leans over to me before we take to our sides of the playing area. "What exactly did you tell them to make them talk to me like I'm an alien?"
I grin, shrugging. "Well, you're a girl so you are an alien to them. But I asked them to talk a little slower so you'd be able to catch up. Forgot kids take things a little too literal sometimes."
"Oi!" Alex calls from their goal. "Jouons!"
My grin at Emma widens, and I give her a quick peck on the cheek before jogging over to Claude. The words are already on my tongue, but I bite them back just in time. We are never having a boy. The comment cuts me, too, because it's not only a reminder of what could have been, but also of what might never be. Not if we can't make our way out of this. And while we're making improvements, I know it's too early to harbour hopes.

We play until the two kids get joined by their parents. Not because they make us stop playing, but because the parents chat us up and the boys get so annoyed with the delay that they give up on the game and go to make a sandcastle. Jean-Claude and Gemma are a bit older than us, both halfway down their thirties, and they invite us over to their spot for a glass of wine they took along. They speak in quick, accented French that's even tough to follow for me, but then they comment on Emma's skin turning red and that's how they figure out she's not from France. The moment they do, they both switch to English. Still with a heavy accent, but at least everyone can understand each other now.
"Claude definitely got his guts from his mother." Jean-Claude laughs. "He's always the one to walk up to strangers and ask if they'll play with him. Not a lot of them agree to it, though, so thank you."
"Not a problem." I chuckle. "It was quite an interesting game, actually."
"I know you're young, but do you have any children?" He asks. "You seem to be the same age we were when we had Alex."
Next to me, I feel Emma shutting down. I'm at a loss of words myself, because I've gotten good at faking it, but not with a direct confrontation like this. But before either of us can give a response, Jean-Claude has gotten smacked against the leg by his wife.
"Allez, Jean-Claude!" She gasps. "You can't just ask that! We've been over this! You of all -" She catches herself, taking a deep breath. I notice that her gaze isn't fixed on her husband, or me, but Emma. And it's not pity, but sympathy that glistens in them. With my heart dropping, I realise it's a look of recognition. She lets out a slow sigh, because Emma's silence and down-cast eyes, a response I suspect was involuntary, is all the confirmation she needs. "I don't need to know any details. You don't have to talk about it, at all. I'll assure you this man is going to get a talking to when we get home. But you're not alone." And then, flawlessly trained in diverting the subject because I don't doubt she's had to have done it so many times for herself, she whips out a card game and starts explaining the rules, as if she always expected to run into us on this beach.