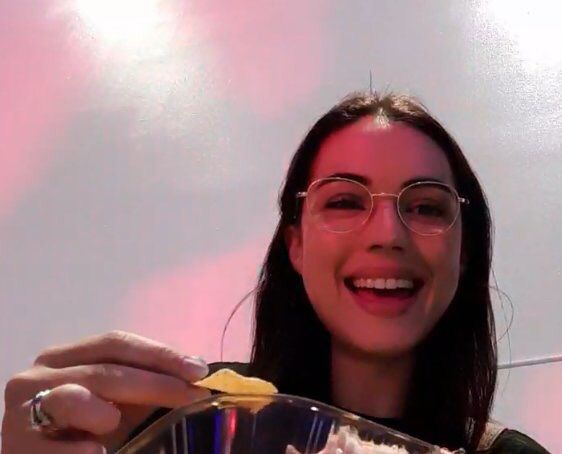 It might sound a little dramatic, but when I wake up the next morning, it feels like a weight has been lifted off of my shoulders. Images of last night slowly seep back into my mind, and with the clothes I find spread out all over the floor, it's not hard to remember the milestone we've reached after returning home last night.
"You're awake," Lucien's voice sounds hoarse, and I turn my head to face him. He's turned on his side, his hair looking even darker on our white sheets.
"Sure am," I lean closer to him, pressing a kiss to his lips. My entire skin seems to tingle whenever we touch, leaving me feeling like I'm on fire after last night.
We won't talk about what happened, leaving the magic linger for as long as it can. "And I'm hungry." To confirm that statement, my stomach growls loudly, making the both of us chuckle.
"You're not the only one," he lifts a finger up in the air, squeezing his eyes shut a little more and intensely listening. Like clockwork, after hearing us wake up, Frank starts screaming.
"Well," I smile, "let's get up, then, shall we?" I make the first move to get out of bed, Lucien still in the bed, as I feel his eyes on me. "I said we."
When I turn my head, he's pretending to look all innocent, a little smile on his face. "I'm just enjoying the view."
Simply to tease him, I put on one of his shirts nearly immediately, covering up said view, leading him to groan.
"Show's over," I smile, hopping into some underwear. "Time for breakfast."
Without a sliver of embarrassment, Lucien hops out of bed in all of his glory. Like I'm supposed to, I stare and enjoy the view, that same sneaky smile now on my face.
"You're staring, Middleton," he simply grins, his bare butt now almost out of our bedroom door. "That's impolite."
"Are you sure you want to go out like that? Frank's going to claw your -" he already wandered out into the living room, causing me to walk out behind him. "Luce, the curtains are open wide!"
"So?" His grin is wider than I've seen it in a while.
"People can look in!" I step in front of him. The chance of people on equally high floors being able to stare at my boyfriend in his birthday suit is slim, but still something I'd like to avoid.
"Well, if you get to stare, shouldn't they, too?" He tries to move out of my way, Frank circling both of our ankles by now.
"Lucien, I swear to god," I grab him by both of his upper arms, our faces now dangerously close to one another. "You're playing a dangerous game, right now."
"Is that so?" He bites his lip, sending shivers down my spine. "And why might that be?"
"Because...." Our eyes meet and I'm unsure if I can control myself much longer. "This view is for my eyes only."
"Yet you robbed me of my view in a split second," he exageratedly sighs. "Not quite fair, is it?"
I chuckle. "You are one vindictive mother-fucker, Lucien du Castellon."
He smiles back at me. "Oh, I am..." Before I can fathom what's going on, he's swooped me off of my feet, my body now dangling over his shoulder.
"Luce," my hands find his back, steadying myself. "We have to feed the cat."
"Cat can wait," is all I hear him say, carefully guiding the both of us back into the bedroom without knocking my head against the doorframe - something I'm quite thankful for. "Now," carefully, though with determination, he places me on the bed. "Let me show you how vindictive I can be, Emmeline Middleton."

Breakfast has long turned into lunch, and under the guise of it still kind of being my birthday, or at least my birthday weekend, we've ordered bagels from our favourite lunch spot.
We're sat out on the balcony, Lucien in just a pair of comfortable pants and me in one of his shirts and a pair of shorts. The sun is beaming down nicely, and even Frank has decided to lay outside with us - that is, with his head on the balcony tile and the rest of his body inside, because technically he isn't allowed to be on the balcony.
Lucien eats all of my pieces of tomato, and in turn gives me the capers that came with his salmon bagel. I steal sips of his green juice, which mixes weirdly with the pineapple and coconut juice I got.
For the first time since the whole drama, I've posted something on social media. A simple candid of Lucien, the sun lighting him from all the right angles, as he stared out into the distance. It's far from solving the issue at hand, which is that people have a billion of questions and even our old posts get flooded with them, or the pages that have posted a bunch of sympathetic yet uncomfortable messages to send something that sounds vaguely like condolences our way. Rumours are still being spread every day, and people are sure we've broken up after we were seperately spotted in Paris and Edinburgh, or when Lucien - as per my request - didn't post anything about my birthday.
"Don't you dare," I hear Lucien mumble, and as I look I see Frank eyeing his salmon eagerly.
I pick a small piece, dangling from the edge of his bagel, off with my nails and throw it towards our cat.
"You really spoil him too much," Lucien half laughs half groans, shaking his head as he watches the cat gobble the piece of fish up.
"Well, he deserves to be spoiled," I smile. "Look at him, he's beautiful, and he's had a hard life before he met me. He deserves the world - don't look at me like that, you know how much I love that cat. You should be glad I haven't adopted three more when you were away."