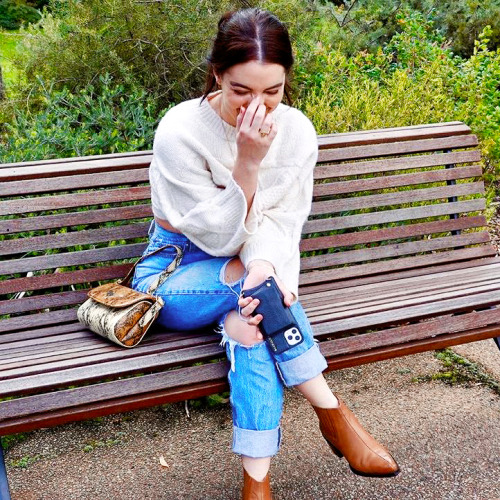 It's nice, not having to get up early after four days of waking up to the sound of an alarm clock. It hardly took any time getting used to, both the going back to work and the having Lucien around as I did so, and it makes the weekends feel even sweeter.
The bed is empty, which is a little sour, but the sound of the shower running tells me Lucien isn't far.
The bedroom door is open slightly, which has given Frank the opportunity to come in as I was still asleep, and he's cuddled up to my legs, dead asleep, meaning he's already had breakfast.
"Morning," Lucien walks in, ruffling his hair with a towel, his bare torso glistening with small droplets of water. It is a pleasant sight to see, and I take my time taking it in.
"Good morning, du Castellon. You're out of bed for someone so terribly handsome," I reach a hand out, still nowhere in reach. "Come back to bed."
He chuckles. "Your weekend may have truly started, I have an online lecture in half an hour."
"Plenty of time," I drag my words out as long as they can get. "Come."
"Not to toot my own horn," he opens the sliding doors to our wardrobe, "but I'm sure we'd both need more than thirty minutes."
I pout, pulling the blankets up slightly and waking Frank in the process. "You're no fun."
He whips the towel that was used to dry his hair in my direction jokingly, hardly touching more than the sheets covering my chest. "Professor Middleton, I don't know what's gotten into you, trying to persuade someone to be late to a lecture..."
With a groan, I tip my head back into the pillow. "Don't call me that at home, and especially not in our bedroom..."
With a laugh, he puts on a shirt and jumps into a pair of pants.

Lucien couldn't follow his online lecture in our study, because that'd be too suspicious considering that's usually my background for online lectures too, which is why he's sat at our dining table. It means that area is off limits for me, even when I finally get out of the shower and want to have some breakfast.
I avoid walking behind him, and don't make a single sound whenever I can tell he has his microphone on to say something. Which is more often than other students, I notice, probably because he slowly has built up a reputation at the school. With his experience in the law field, and nearly perfect school record up until his last year, everyone seems to be very interested in what he has to say.
That, and all of my colleagues know he's my boyfriend, though they've been told not to mention it until we come out with the news, or until it somehow comes out. We're not being too secretive about it, but we're also not telling people.
Amidst one of Lucien's many answers, satisfying one of my male colleagues terribly from the excitement I hear in his usually monotone voice, Frank decides he's had enough of it, and jumps up onto the table, almost entirely on top of Lucien's laptop.
I almost scramble to get him off, watching Lucien react in surprise, laughing as he picks up the black and white cat. "My apologies," he smiles. "Our... my cat is very opinionated."
I'm out on our balcony for a smoke when Lucien comes out. It's a little cold out, but us Scots like to pretend it's not until the snow falls from the sky, and Lucien shivers as soon as the air touches him.
"How was that lecture?" I smile, leaning my head against the back of the couch.
"Wonderful," he sarcastically smiles, sitting down next to me on the little sofa. "Nothing new, and the prof seems to love asking me things, so there goes my whole idea of staying below the radar."
"Lucien du Castellon doesn't do below the radar, babe," I remind him, using his shoulder as a pillow now in stead.
"No, but Remí Reyes does," he kisses the top of my head. "Though it's bound to come out any time soon, I guess..."
"Let's enjoy your anonimity while it lasts, then, huh?" I put the cigarette in our ashtray. I'm about to make a move, and a bold one considering we're out on our balcony in the open air, as his phone buzzes. It's just a light buzz, and doesn't come with a ringtone, which means it isn't anyone important, but it still catches me off guard a little.
He checks it, his fingers gliding over the keys of his phone quickly, then he puts it back in his pocket.
"Important text?" I smile, somewhat curious, twirling a curl around my finger.
"Oh, no, not really," he shrugs. "Just this girl from some of my classes, checking on the homework."
"Doesn't she know how to work Blackboard?" I tease, one single finger tracing the birth marks in his neck.
"Ha, ha," he shakes his head, a smile around his lips. "No, she just wanted to know what case I picked for your class, actually. I told her I didn't pick one yet."
"You didn't?"
"No, because I already know how to read a case and my professor won't mind if I don't submit the homework. I can't tell her that, though."
I raise a brow, sitting up straight next to him. "She won't? How are you so sure?"
"Because," his hand lands on my thigh, immediately sending shivers down my spine. "She'd agree it was a waste of our precious time, this wonderful free weekend."
"What would you like to spend that time on, then? Only if I knew that, I could agree.." His mischevious smile must mirror mine as he pulls me onto his lap.
"I could tell you, but I'd rather show you..."
"Enlighten me, mister du Castellon...."