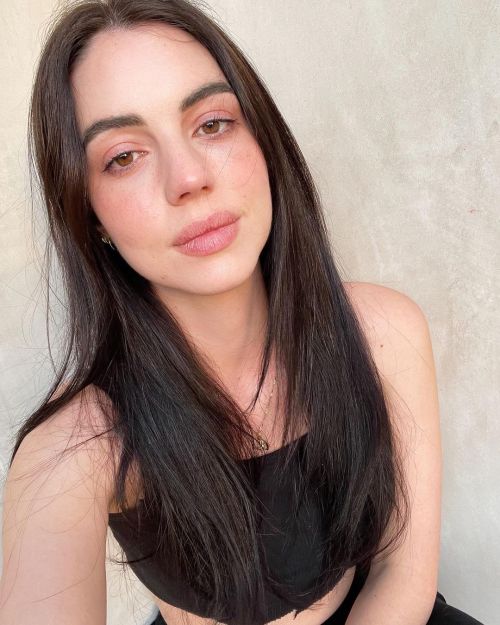 It takes a lot of getting used to, having two kids around the house. I'm nowhere near as prepared for this as I thought I was, which is a disappointing realisation. However, I'm loving every second of it.
Spending time with my godchildren feels like a welcome change from stress and meltdowns, and even though seeing them hits a certain emotion somewhere deep down, the biggest feeling is happiness.
Especially when I watch Lucien pick Emilia up from her chair, lifting her up high in the air before putting her down on the floor, where she is immediately happily greeted by Lance, trying to lick some leftover jam from her cheeks.
It makes my heart flutter in a way it doesn't flutter often, the feeling combined with a faint rattling of my ovaries, screaming at me to make Lucien a father.
"What?" he smiles at me when he catches me staring, and I tear my eyes away from him immediately, my cheeks feeling warmer than they did before he noticed me. I turn to Felix, who's drumming on his table, smearing his hands in puree in the process. "Em?" There's a light, cheerful tone to his voice - a tone I love to hear.
"What?" I repeat him, trying to get the blush on my cheeks to disappear, but it only sticking around more and more as I pretend not to know what he's talking about.
"You were staring," he chuckles as my teeth sink into my lower lip to stop a stupid grin from forming.
"I wasn't... just lost in thought," I half-lie.
"Sure you were...," he laughs, wiping down part of the table to get rid of any possible jam-coloured stains. "What were you thinking about, then?"
"Nothing in particular," another lie, fueled by the two-sided nature of my thoughts. The flutter in my stomach with the little shadow cast across it, the memory of pain and heartbreak surrounding children. Our children.
"You're a terrible liar, Middleton," he shakes his head. "But alright.."
We spend the rest of the day doing next to nothing, our schedule modeled around when the two little ones nap. After putting the two of them to bed for an hour, Lucien sinks down onto the couch whilst I walk Frank, and upon my return, he too has fallen asleep in the exact same spot I left him.
It's tempting to snuggle up to him, his mouth slightly agape and his breathing even and relaxed. I don't, though, and grab a book in stead, sitting down opposite from him.
I don't read much, finding myself staring at him every once in a while. From the way his eyelashes flutter from time to time as if he's about to wake up to how he lets out a small sigh when Frank jumps onto the couch, every single movement or sound nearly makes my heart skip a beat.
"You're doing it again." Even with his eyes closed, he has apparently noticed my admiring gaze, and a smile plays around his lips.
"You were asleep," I mumble, closing my book and putting it down beside me.
"And you were staring," his hands, now stretched out in front of him after he rubbed his eyes, make a grabbing movement to signal one thing and one thing only - come here.
I make my way into his embrace, our bodies nearly melting together as he kisses my forehead.
"Couldn't help yourself?" he smiles against my skin.
"Shut up," I smile back. "You were drooling. I was simply looking at you because you looked funny."
"Sure...," he laughs. "Of course you were, Middleton."
Dinner with two kids is even more complicated, though it is easy to figure out when the youngest one wants to eat - he simply starts grabbing at my shirt, trying to find his mother's breast, and in stead finding me.
Emilia eats most of her food, though a lot of peas end up rolling across the floor and into Lance's mouth.
There's quite a few diaper changes, something neither of us enjoy but we still do, one of us laughing loudly when Felix decides to pee in the middle of Lucien's turn to change him.
Plenty of songs are sung, Emilia tells us a story using a lot of non-existing words and sounds, and Lucien gives her a piggy back ride as I bathe Felix.
Emilia starts screaming bloody murder when I try and put her in the bath alone after, and when even her favourite song and some toys can't calm her down, I simply shed my clothes and jump into the luke-warm water with her, bubbles covering the both of us.
"This is what mum used to do," I smile when Lucien comes in with Felix on his arm. "You avoid a hissy fit, and you get semi-clean in the process."
After bath time, both children listen to quite a few stories. Felix is the first to drift off to sleep, Emilia following soon thereafter.

Our night is interrupted quite a few times by either or both of the kids screaming their lungs out. It was something we expected, yet hoped wouldn't happen. With the hormones apparently running through my body after seeing Lucien with kids all day, I would have loved a quiet night in which I could tear his clothes of and jump his bones.
After taking turns getting up what feels like ten times, Lucien shrugs.
"You stay in bed," he smiles when I rub my eyes after getting maybe half an hour of sleep. "I'll do it. I'm used to getting little to no sleep anyway."
"Are you sure?" I sigh. "It's my turn.. I'll do it."
"I'm sure," he nods. My heart flutters when I see the smile on his face, and the way he sounds totally relaxed whilst a child is screaming and crying. "Go back to sleep, my love."