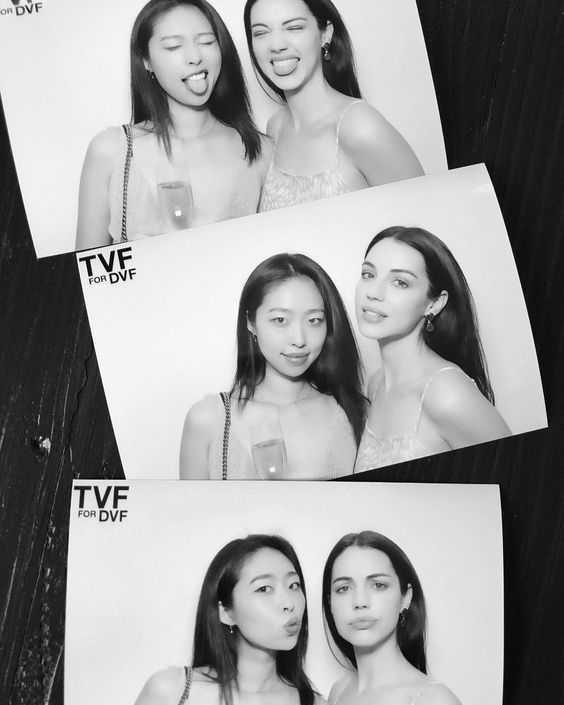 "You were gone an awfully long time," I manage to whisper to Lucien, all while trying to get both Matt and Brie to back off so our little secret doesn't end up with our sisters, who would use it against us for however long they can.
Lucien smirks, a sparkle in his eye that would tell me he's been upto something secretive. Knowing him, this party will take multiple turns before it ends, and I wouldn't be surprised if he was planning something last minute. "Just some arranging. After all, I'm the host."
"And a very succesful one at that. I've heard nothing but praise about this party." I lean my head against his shoulder, feeling his arm wrap around my waist.
"Now would you two stop whispering and tell us why these two won't stop looking at Anne like that?" Eschieve complains, an eyebrow raised. "Or do we not want to know?"
Lucien and I both let out a laugh at the same time, making eye contact with Anne, who chuckles as well.
"You're better off not knowing," I finally shrug, "though that might already tell you enough."
Both of our sisters shiver, obviously trying their best to banish whatever visual it is they're experiencing out of their mind. "Gross."
"Hey, if we have to live with the knowledge you two hooked up, you can live with the fact that we... well, whatever," Lucien comments, resulting in raised brows and open mouths from both Matt and Brie.
"The tiny's? Together?" Brie shakes his head. "My goodness."
Chris, Beth's girlfriend and a good addition to the group, just chuckles. It can't be an everyday occurence, a night like this, and she's handling it like a champ.
"That's quite enough for one night, don't you think?" I smile, taking Lucien's hand in mine tightly.
The party goes by like a blur. Not because we're hammered, but because we are together for most of it, enjoying each other's company. From time to time either one of us gets drawn away, our attention or presence needed elsewhere, but we always end up together again.
When things are slowly dying down and Lucien isn't constantly spoken to or watched, we make our way upstairs, my heels a dangerous tool on the old winding staircase, almost making me trip multiple times.
"Did you lead me up here to do unspeakable things, miss Middleton?" Lucien smiles when I pull him in closer to me.
"There's still way too many people around for that, mister du Castellon... But I must admit I really wanted you to myself, even if it's for just a minute," I move my thumb across his lips gently, his skin reacting to the touch immediately.
"And why might that be?" he holds my hand in his, kissing the back of it before I can pull it back from his face.
"Because it's been two years since we finally fell back into each other's arms again," I smile. "And because you've made me the happiest girl alive, those two years."
"Two whole years," he repeats, letting go of my hand so he can pull me in to his embrace, my chin tilted up so I can look at him. "Isn't it crazy how much can happen in two years?"
"Yet everything has stayed the same, hasn't it? We've gotten older, and we've experienced amazing things, and less amazing things, but I'm still just as in love with you as I was two years ago," his smile, having gone from small and humble to big and wide, makes my heart flutter. "I love you so much, Lucien du Castellon. Thank you for two amazing years, and to many more to come."
"Je t'aime aussi, Emmeline Middleton," he breathes back before our lips meet.

When all guests have gone back to their rooms, the ones that are staying the night at least, and the ballroom is empty, our group of friends has one last drink together.
There's Kenna and Tom, in each other's arms like teenagers. Selene and Charles, rubbing their eyes to stay awake. Matt and Brie, bickering like they never broke up. Beth, Eschieve and the new addition to it all, Chris. And there's us, Lucien and I.
"Lucien toasted before the party started," I begin when everyone has their beverage. "So at the end of the night, I'd like to make a toast. To friendship, only having gotten better over the years. But mostly, no matter how cheesy it may sound, to love. Because two years ago, I became Lucien's girlfriend for the second time - and it's the best second chance I've ever had, and will ever get. May this year of your life be even better than the last one, and filled with everything you wish for."
Lucien looks amazing in whatever he wears, but one of my favourite things is when he takes off his party outfit after a long night. The buttons to his shirt come undone, and he slowly exposes more and more skin.
Some times, I'm the one undressing him, but tonight neither of us seems to be in the 'tearing each other's clothes off' mood.
"You're staring once again, Middleton," Lucien smiles when he catches my gaze in the mirror, sliding the white fabric of his dress shirt down his arms.
"Luckily, you don't mind when I stare," I smile, wiping the last bit of lipstick off.
"I don't mind it at all," he admits. "I just like to remind you when you do."
"You just look so handsome in a suit," I stand behind him, our eyes meeting in the mirror. "So sophisticated, so sexy."
He smiles. "Luckily, you'll get to see me in a suit many more times. That's the thing about a suit - there's so many occasions to wear it. A dress like this one, though.. that's a one occasion thing, isn't it? Maybe twice, if you're not afraid of repeating..."
"There's only one dress a woman should only wear one time," I mumble as his fingers slowly creep up my sides, then to my back, finding the zipper. "But you'll never see me in that, now will you, du Castellon?"