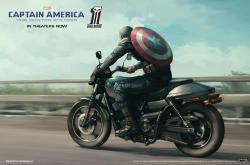 Red skull was under his wing when Captain America defeated him for the second time. But then he got a cunning idea ...