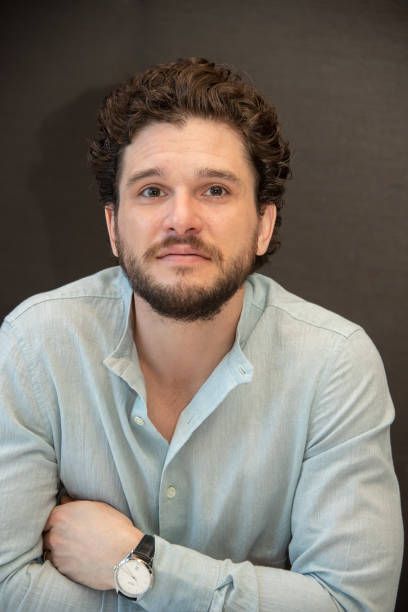 Her rolling over in the first beams of sunlight, dark hair sprawled out over our white pillow cases, is one of my favourite visions in the entire world. And, as the little diamond catching the sun proves, I'll get to enjoy it for the rest of my life.
"Morning," Emma mumbles with a smile, stretching out. Then her eyes finally lock on the tray in my hands, and her head tips curiously to the side. "What's this for?"
"To apologise in advance for the fact that I'm going to be unavailable for the next two weeks."
As she sits up, her hair cascades over her bare shoulders in messy waves, some just shy of being ringlets. She covers her chest with the sheets and gives me a look when she catches my slightly disappointed gaze. I grin. She rolls her eyes and lets out a content sigh.
"I hate that life just... goes on. I wish we had more time to enjoy this."
"I know." I bend over precariously, as not to knock over anything on the tray, to properly kiss her good morning. "But I promise that we'll find some time soon where we can properly celebrate for longer than just a day."
"And when's that going to be?" She chuckles. "You're going to be making exams for two weeks, I'm going to be grading for another week after that, then you're starting that damn internship -" She doesn't let my miserable groan stop her. "and we both know that the trip to France is going to be more stressing out than it's going to be spend celebrating."
"What a joyful outlook on life."
She shoves me with a laugh. "You know what I mean!"
"I know, I know." I move the tray over to her lap, and pick up the second cup of coffee that I'd made for myself. "But then it's almost summer and we'll have the entirety of it to celebrate. And until then, we'll sneak every little moment we can find."
At that last statement, her face finally softens into a smile. "That sounds like a good plan."
"Of course it does. I came up with it."

The rest of the day, my office becomes my sanctuary. The desk is covered in open books and stacks of papers, and it's all just as messy as my brain is. I've never been good at the actual studying part of university, much prefering to learn as I do. It used to be frustrating to me ten years ago, when I had a little experience but big dreams, but it's worse now that I have a couple of years of experience under my belt. I know that I'm rarely going to use most of the information I'm trying to soak up, making it incredibly hard to keep myself motivated. There's no passing these exams on experience, I need to know the cold hard facts as they were written out in the books.
To keep the urge to throw myself out of a window at bay, I switch between studying and skimming through Brie's edit of my birthday-video. I quickly realise it's doing to exact opposite of what I want it to do, because it just makes me more miserable when I have to switch back to studying.
It's for the greater good, I tell myself as the words start to drift across the page. Think of what you can build in the space Emma got you once you've gotten your degree. Think of all the things you can do. You love being a lawyer. This is what you need to get through to actually be a lawyer.
It works, if only for thirty minutes. When I look at the clock, it's a couple of minutes past one. I don't even remember when I started. I then look at my schedule, for what must be the fiftieth time that day. It's still the same - my first exam is coming Monday, four days from now, and so is my first essay deadline. Then, spread out over the following week and a half, I have six other exams and two extra deadlines. Then I get one glorious day off before my internship starts, which will come down to me spending four days at a firm doing all the things my father also had me do when I was nineteen. For six weeks. Can't say I'm looking forward to it. Then again, it might be so easy that it'll cost me less energy than actually following classes. With some luck, they'll be so impressed by me that they'll let me go early.
Don't be so cocky, Du C. A voice echoes in my head, and it sounds suspicously like Matthew. I smirk to myself, and dedicate myself back to writing about the implications of underage criminal law.
Until the door slams open and two pets come crashing in, excitingly greeting me as I've been away from home for a week, and Emma standing in the opening with her jacket on and holding out mine.
"We're getting lunch." She says, and she does it in such a tone that I know not to argue. Still...
"Just for an hour."
"We'll be out for however long we please, Du C." She chides, thrusting my jacket in my direction. "Now get the blood flowing in those legs."
She drives us to our favourite bagel place and in a little game we started with when the place first opened, we order for each other. She gets me a tuna melt on a sesame bagel, and I get her the avacado and egg on an everything bagel. Despite temperatures being rather low again today, we each get an iced coffee. As we sit at one of the too-tiny tables, I find myself looking for Emma's enagement ring - standard practise ever since she's taken it - before realising that she's not wearing it. She catches me looking, and smiles; she hooks her pinky finger around a silver chain around her neck, and pulls the ring into view from being hidden under her shirt.
"I don't need paparazzi making wild guesses on why I've gotten a ring that so closely resembles an engagement ring." She explains. "Could you imagine?"
I chuckle, and shake my head. "I can't wait for the articles somehow twisting it to you being engaged to another man..."
"Who knows, Matthew's been looking kind of lonely lately."
She yelps when the caper pelted at her hits her square in the forehead, and next thing I know she's smeared avocado on my cheek.
"If it's going to be like this for the rest of my life..."
She glares daggers at me. "Then what, Du Castellon?"
"Then I can't wait."