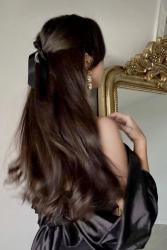 It wasn't until late that night that Draco and I were finally alone. After dinner we had sit down in the common room with our little group of friends, playing card games and catching up. However Draco had been quiet for most of the night, only talking when he was asked a question. When almost everyone went to bed and it was just Blaise, Theodore, Draco and me left, he finally spoke.

"I need you all to leave. I have important things to discus with Zara."

I looked into Draco's eyes, wondering why he chose to speak up now. Blaise and Theodore just went along with it and stood up, wishing us a good night's sleep.

There were a few minutes of complete silence. I usually didn't mind the silence between Draco and me, it had never felt uncomfortable or awkward. This time however it felt unbearable. He was also avoiding eye contact and kept starring at the expensive watch on his wrist.

"For fucks sake Draco, talk to me."

I crawl forward so I am closer to him and take his hand, giving it a small squeeze.

"Start with our engagement, when did you know?"

"The first week of our summer holiday. It was him who pushed for it."

The Dark Lord. He didn't need to speak his name, I knew right away that that was who Draco means. I felt fear throughout my entire body. I didn't understand why the Dark Lord would want Draco and me to get married. He didn't make choices just because, he made them with a reason. Our marriage was part of one of his plans and that thought terrified me. What would he have to gain out of our marriage?

It made sense for our families, of course. Keep the bloodline pure, keep the family in a powerful position. We all knew we would marry for convenience over love.

"Did he mentioned why?" I asked him, a slight tremble in my voice. It made Draco look up, he noticed the fear in my voice. "He didn't. But mother was deeply upset by it, and you know how she adores you. So whatever it is, it can't be good."

I let the tip of my fingers softly trace the dark circles underneath his eyes. "Is that why you look so tired?"

A small smile appeared on his face. "Isn't that what girls these days are into? Brooding guys who do not sleep. I thought I'd try out something new this year." I couldn't help but laugh a little. "Well, the brooding isn't very new, but the not sleeping definitely suits you," I grin.

"The house was filled at night with people screaming. He tortured many people for information on Potter and Dumbledore. I couldn't sleep with all the screaming. Even when it was silent, I could still hear them in my head. I still hear them now, screaming for mercy."

"I was so glad I was able to see you on your birthday, getting out of the manor and seeing your face. It's the only thing that kept me sane this summer," he chuckles ruefully.

"I am so sorry for not being there for you Draco, If only I were there-"

He stops me from speaking by pulling me into a tight hug. "I am so glad you weren't there. I was so incredibly relieved to hear that your parents wouldn't allow you to join us. You were there for me by not being there. You are unmarked, still pure, and for that I am so grateful," he says, his voice breaking ever so slightly. It took me a second to realise what he was saying, and the moment that I did, I pull away from him. I grab his left arm with force and turn it around so I can see the pale skin of his inner forearm. I grab my wand, pointing it at the spot I knew the mark would be hidden and whispered softly.

Softly the inky black of the Dark mark became visible. He got out of my grip and pulled down the sleeve of his black shirt. I stand up and turn around. I squeeze my eyes shut and let my hands glide through my hair while trying to keep myself calm. I could feel my eyes tearing up. "Is there anything else?" I ask him quietly, a small tear escaping my eye.

"He gave me a task to complete."

I turn around to face him again. He was standing now as well, his right hand holding the sleeve over his left arm down. I swallowed, feeling the guilt seeping through my body. I should've have forced him like that, I know I was in the wrong for that.

"I have to kill Dumbledore," he then said. But as soon as he had spoken I could see the immediate regret on his face. Because he knew that it wasn't a matter of I anymore. The second he told me, it became a we task. There was no way I would let him complete his task on his own, and he knew. Yet I knew this also meant that he would try everything he can to keep his distance from me this school year just so he can keep my hands clean. What a pair we make.

I hadn't been able to close my eyes that night. Every time I did all I saw was the Dark Mark on the arm of my best friend. I was thankful that all the girls were already sleeping when I entered the sleeping chambers. I didn't have the mental energy to make up lies, not last night at least.

"My beautiful Zara, as promised, your belated birthday present," said Pansy, her voice filled with excitement. We were sitting in the great hall for breakfast. I didn't feel like eating yet and was instead slowly sipping my black coffee. Pansy placed a small red box on my still empty plate. I put down my mug and took the box in my hands. I opened it carefully. Inside the box was a black satin hair scarf, with my initials sown into it with silver thread in a very delicate manner.

"Pansy it is absolutely beautiful." A genuine smile formed onto my face. "I got it out of this really cute boutique in Paris, we definitely have to visit someday together. Everything there screamed Zara to me," she laughed. "Thank you for this Pans, I love it." After hugging Pansy I take the scarf out of the box, pull some of my hair back and tie it in such a manner that the scarf forms a loose bow.

The gift had cheered me up a bit, but it was the thought that Pansy knew exactly what I liked and kept me in mind on her trip to Paris was what really warmed my heart. I know there weren't many people who were fond of Pansy, even in our own house most stayed clear of her. But I could not have wished for a better girl friend.

When Draco and Blaise came walking in and took place across from us, I felt a mixture of anxiety and sadness take over my body. I didn't want to alarm Pansy or Blaise so I decided to act through and put on a smile.

"A very good morning my future husband to be and Blaise," I say. Draco looks me in the eyes for a quick second. He knows what I was doing. Blaise who didn't, pouted.

"I feel like you could have added something for me as well; handsome or good looking. Or perhaps sexy if you wanted to make it a bit more spicy." I couldn't help but laugh at his comment. I even noticed the corner of Draco's lips move upwards ever so little.