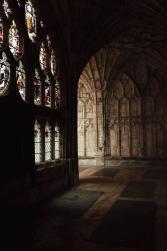 "You don't look very sick," I hear Theodore say the second I set foot in the common room. I looked at Pansy who send me an apologetic smile.

"She had to run an errand for me, now give me your damn card," Draco says, pulling a card out of Theodore's hand. I walk over to my group of friends and sit down on the floor next to the fireplace. "What for errand?" Blaise asks, looking at me suspiciously.

"That's none of your business. Now hand her some cards so she can beat your ass," Draco replies, winking at me. Blaise mumbles something, but hands me over five cards so I can join the game. We play for a little while before Pansy and I call it a night. As we walk upstairs to the girls dormitory and I reach my hand out to open the door, she stops me.

Her eyes grow bigger. "He's so into you!"

I roll my eyes, but couldn't help but smile a little.

"No, he just doesn't trust me, which is understandable."

Very understandable. Even Pansy didn't know the full truth, but even if she did, she would support us. She would've done the same thing as I have, which is why I knew she wouldn't be mad at me if Draco does decide to open up to our friends about his task. Potter is a whole different case. He would hate me, probably bring us the the ministry himself if he had the chance. And I couldn't blame him, I would hate it too if I was being used in a plan to kill someone I admire.

"So when is the date?" she asks, wiggling her eyebrows.

"Okay I'm sorry, but seriously. When are you doing this?"

"He is picking me up Saturday at midnight. We'll meet outside the common room."

This time during potions class, I was sitting next to Draco again. While Draco was having a conversation with Blaise and Theodore who were sitting in front of us, I had been feeling nervous and kept my eyes to the classroom door, waiting for a certain person to enter. There was only a minute left before class started as Potter came in with Weasley and Granger. The moment he sat down, his eyes were on me.

"What are you looking at Potter?" I hear Draco sneer. I had expected Potter to look away from me, but he didn't. Instead he send me a small smile. "Stop starring at my fiancée, you wouldn't be able to please her like I do anyway," Draco then adds, causing Potter to look away. A smirk forms onto Draco's lips, clearly satisfied with himself I knew he just said this to get a reaction out of Potter like he always did, but he had never used me to do so, which made me furious. Especially since he was lying, and boasting about a non existing sexual relationship between us.

I could feel all eyes on us, even Slughorn had looked up from his desk, but kept everyone remained silent. I stood up and grabbed my book, making Draco look up at me. Before I turned around to walk to Pansy's table, I looked him in the eyes and said through gritted teeth: "Don't you ever do that again."

Thankfully Slughorn decided that it was now time to start class, and just pretended like nothing had occurred. As I sat down next to Pansy she softly puts her hand on my knee.

"Are you ok?" she whispers. I just nod and try to focus on the rest of the lesson while trying to ignore the burning eyes of Draco on my back.

After what felt like forever, the class was finally over. I walk out of the classroom with Pansy, only to be immediately stopped by Draco, who was waiting outside.

"You're coming with me," he says. I raise my eyebrow. "Excuse me?" He doesn't say anything back, instead he tries to grab my hand, but I slap his away. "Zara, please," he then says with a slight desperation in his voice. I nod my head to the empty hallway a little further away and start walking, with Draco following me.

"You've got two minutes," I sneer.

"I didn't mean to say it like that, I just wanted to get a reaction out of him."

"Don't lie to me! You knew exactly what you were doing," I scream

"Why would you even say that to begin with? And why now? There are plenty of other ways for you to insult him, yet you choose to not only let him, but also the entire classroom, know that apparently you please me? I just can't believe you would say that, what on earth were you thinking?" I ramble.

"Who do you care so much what other people think about our relationship? You never seemed to care before," he spat back.

I know it was strange that all of a sudden I did care, but it wasn't for the reason I knew he was implying. It was the thought that even though the words he had spoken about our relationship weren't real now, but would be in ten months after we got married and would be expected to produce a heir, that made me anxious.

I loved Draco, I did. But as my best friend, and while marrying your best friend came with it's perks, I could only see the negatives. I didn't want our relationship to change.

"I don't want us to change," I tell him honestly, feeling my eyes starting to water. He looked at me, his expression softening. He let out a small sigh before speaking.

"I don't want us to change either."

I feel a small tear escaping out of the corner of my eye, and soon another one following. Draco puts his hands on my cheeks, wiping away my tears with his thumbs.

"I also want us to stop fighting all the time," I sobbed.

"We have been fighting more these past couple of days than all those years we've known each other," he says, making me laugh a little through my tears.