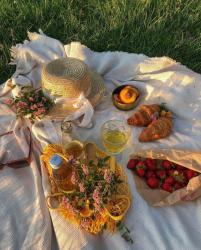 The rest of the days up to Saturday had been surprisingly good. There hadn't been anymore fights between Draco and me, classes flew by and the weather been amazing. So amazing that Pansy, Daphne and I decided to have an extravagant picnic. We all put on some nice dresses, went to Hogsmeade to get some pastries to go from Madam Puddifoot's Tea Shop.

We had found a nice spot on the school ground, near the quidditch field. We hadn't been the only ones with the idea to have a picnic, but we were the only ones who did it in style. We had gotten some wine from Blaise and had asked the Hogwarts house-elves for some fresh fruits. As we were laying on the blanket, soaking in the September sun, sipping on our wine and talking about absolutely nothing of importance, I found myself having a genuine amazing time.

"Snog, shag or hex Theodore, Blaise and Draco," Pansy asks Daphne. "How am I supposed to answer that without making it awkward?" Daphne laughs. While Pansy and Theodore always hook up when drunk, and Draco and I are engaged, nobody is actually dating each other. But I could understand what Daphne meant. I wouldn't care what her answer was, but I did think Pansy asked Daphne in order to find out what she's say regarding Theodore. Pansy might never admit it, but I knew she had some feelings for Theodore. "Fine, snog Blaise, shag Draco, I'm sorry Zara, and finally hex Theodore," Daphne answers after Pansy and I had been starring at her with curious eyes. I could see a small smile on Pansy's lips, she was clearly satisfied with the answer given.

"Okay so snog, shag or hex the golden trio," Daphne asks me, wiggling her eyebrows. Pansy looks at me with a grin, pulling her sunglasses down. "I am very curious to what your answer will be," she says, holding back her laugh. I turn my gaze to Potter, who was sitting with a group of Gryffindor students a little further away from us. The guys had been playing some sort of muggle sport with a strange looking ball, but seemed to have a blast. I looked back at my two girl friends, who were eagerly awaiting my answer. "Snog Granger, shag Potter and hex Weasley," I answered in all honestly, making Daphne let out a small scream. "Honestly same," Pansy answers, making Daphne scream again.

While Pansy was trying to shush Daphne by practically attacking the girl, in the softest manner possible, I quickly took another glance at Potter. His cheeks had been red from running around with his friends, his hair even messier than usual and he was laughing with some of the guys had Weasley who had slipped on the field. He looked younger now, carefree. I felt my heart skip a beat and couldn't help but smile.

I had to admit I am excited to see him tonight.

"Aren't you cold?" Is the first thing Potter asked me when he saw me outside of my common room. He was wearing his invisibility cloak, only his head peering out, which looked rather strange. I was however very amazed by how the cloak worked. I had heard from Draco that Potter really had been invisible with it, but it was still a strange sight.

When it came to Potter's question, the answer was yes. I was very cold. I was wearing my black satin nightgown with a black cardigan and some socks, because quite frankly I don't have a lot of options to go on nightly adventures in. I don't ever wear pants, and all my warm socks and knitwear are still at home. I also didn't own any flat shoes, and I didn't think going around the castle in heels at this time of night would be a very good idea, so my socks it was.

"No," I simply said. He nodded, taking of his cloak so he was now completely visible. He wore dark sweatpants with a dark hoodie which looked very warm and comfortable. Draco had offered one of his cardigans, but I didn't think wearing something of Draco had been a good idea. Potter would probably notice the cologne immediately.

As Potter puts the cloak over the both of us, I suddenly notice how close we have to be in order to stay completely hidden. I could feel his arm brush against mine with every step we took, and that alone made me feel warmer. I was very glad we were in the darkness, or he would for sure be able to see how red my cheeks had gotten.

"We're in the clear now," he softly whispered as we were in the restricted section. We hadn't spoken the whole way to the library, and the second he pulls the cloak down I let out a large breath I didn't even know I was holding in. "Lumos," I whisper softly as my wand lights up.

"So what are we exactly searching for?" Potter asks me, lighting his wand as well.

"Anything about poisonous plants."

He didn't question me further, just wend ahead and searched the books that were in front of him. Part of me was glad he didn't ask, but another part of me wondered why not. I was in Slytherin, engaged to his nemesis who he didn't trust at all. Why would he not be curious as to why I am looking for poisonous plants?

"I think I got something here," he said a few minutes later. He got out a very thick book that was called Moste Potente Potions. "You wanted it for potions, right?" he asked me as he hands me the book.

I furrow my brow, almost forgetting the lie I had told him a few days ago. I felt guilty taking the book out of his hands, but nodded either way. If Potter found out the real reason of why I needed this book, he would probably bring me to Azkaban himself. As I go flip through the pages, I soon find the page I was looking for. I try to memorise the brewing of the potion and the ingredient list as quick as possible, wanting to get out of here as soon as possible.

It isn't until we hear footsteps that I close the book a little to loudly because the sudden sound had startled me. We put out our wands and as I put the book back into it's place, Potter puts the cloak back on. He pulls me with him to the far back of the restricted section so that we are standing against the wall, the furthest away from the book shelves.

"Is somebody here?" I hear the familiar voice of Snape and feel my eyes grow wide. I knew we were not visible, but I still felt the fear of being seen, go though my entire body.

I see him walk into the restricted section, the bright light of his wand shining directly into our direction.

"Show yourselves," he says, his voice strict. We both remained silent, waiting for Snape to hopefully leave. He walked around the area, inspecting every nook and corner, but finally left after what felt like forever. We remain against the wall until we no longer hear footsteps and both let out a breath of release once we feel we are in the clear.

"I almost had a heart attack," I whisper, followed by a nervous giggle.

He smiles at me. "I think it's best to go back now, before he comes back," he says. I nod in agreement and we carefully start moving, making our way out of the restricted section.

When we walk through the hallways, I feel myself shivering. Potter noticed and stopped walking.

"It's nothing, we're almost there anyway," I shrugged.

"What if you get sick? You're barely wearing any clothes," he states, looking me up and down.

His comment however, did warm me up a bit, as I suddenly feel my cheeks heat up again.

"If you are not comfortable with this, please say so," he then whispers. I give him a confused look, not understanding what he means, as he suddenly stands behind me. He puts his arms around me, placing his hands on my arms and slowly rubbing them up and down to warm them up.

I thought that almost getting caught my Snape had made my heart skip fast, but it went even more rapid now.