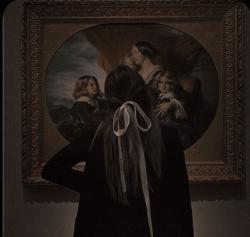 I keep repeating that sentence in my mind, over and over again. I hadn't even meant to say it out loud.

I was laying in my bed, my heart still beating as rapidly as it had when I felt his hands on me.

It was only when I heard the first girls wake up, that I finally fell asleep.

I was woken up by Pansy. She had let me sleep in for a long time, but she knew I would hate myself if I slept past noon. She had awoken me softly, stroking my cheek.

"Rise and shine gorgeous," she smiles as I started opening my eyes. She was sitting on the edge of my bed, a few school books on her lap. I pull myself up and stretch my arms out, followed by a long yawn. Pansy puts the books on the side and crawls closer to me, a sudden flash of excitement behind her eyes. "How was it?" she asks me, her voice higher than usual. I look around the room, making sure nobody was here.

"They are at lunch already, so spill!"

I couldn't help but laugh. Even though Pansy didn't know everything that was going on, she seemed very supportive of whatever it was that I had going on Potter. I could only hope my other friends would feel the same once or if they ever found out about it. I knew I was lying to myself if I said I was merely using Potter. I enjoyed his presence, even wanted to be near him. It was a very dangerous path that I was walking, and yet, I didn't feel scared the moment I was with him.

"I got what I wanted," is all I say. I step out of bed and walk towards my closet, picking out an outfit for today. Pansy crawls to the other side of the bed so we can remain eye contact through the mirror. She was clearly not satisfied with my answer. "He tried warming me up," I then murmur. "Oh, I bet he did," she answers, wiggling her eyebrows. "It wasn't like that. I was freezing, he just rubbed my arms so I wouldn't be as cold," I said, but even I couldn't hide the smile that was starting to form on my lips.

"I didn't think he would actually try something with you, he's bolder than I thought he would be," Pansy said, seemingly impressed by Potter's actions.

"He was just being nice, I was shivering."

"You think he'd do the same to me if I was shivering? Because I'll bet my entire in-heritage that he would most definitely not."

Pansy shrugs, a playful grin on her face.

When I am fully dressed, we both head out to the library. Blaise, Theodore and Draco were already sitting at our usual spot. As I want to sit down, Draco stands up. "Follow me," he says. I nod, place my books on an empty spot on the table and walk after him to a more secluded area of the library.

"How did it go last night?" he asks me, leaning against the wall.

"Good. The potion is very difficult though, especially the ingredients. Not just things we can steal at Hogwarts. The most important ingredient are the seeds of a flower named Abrus precatorius," I begin telling him, remembering all that I had read yesterday. "It will take a few weeks to brew though, and that is if we have all the ingredients. It might take us months since most of the things we need aren't very attainable."

"Then we need another plan. We should make the potion either way, but just in case we don't succeed we need a back-up," Draco sighs. I nod in agreement.

If only killing your headmaster could be a little easier.

When we make our way back to our study table, I notice Potter standing in front of one of the bookcase rows we passed by. I stop walking, making Draco stop as well when he notices. He turns around to look at me, his left eyebrow raised. "I remembered there's a book I needed to look at, so you can go ahead," I say, a slight stutter to my voice.

Draco sees right through my lie and comes walking back to me, looks to the side to where Potter is standing and smirks before leaving again, not saying a word. I knew he would bring it up later though, but for now I was glad he let it go.

"Studying?" I ask Potter, making him look up from the book he was reading out. "Something like that. I'm helping Neville search for a book about water plants in different parts of Europe. I don't know why he needs it, but he sounded very excited about it," Potter explains, a tingle of amusement in his voice.

"Did you manage to get enough sleep? I noticed you weren't at breakfast or lunch," he then says, closing the book he was reading out of and putting it back on the shelf.

"Yes, me neither. I am fully functioning on caffeine right now," he laughs.

"I didn't think that someone who once fought a dragon would get startled by the sight of professor Snape at night," I grinned

"He didn't, all I could picture every time I closed my eyes was you in that short nightdress."

I didn't know how to reply to that. So I just stared at him, trying to wrap my brain about the words I think I had heard. After a few seconds I open my mouth, wanting to say something, but no words come out.

I see the youngest Weasley walk towards us.

I hadn't seen her after our little incident at the party last weekend. She looked from Potter to me, confusion very apparent on her face. I took a step away from Potter, only now realising how close we had been standing to each other, a slight blush forming on my cheeks.

"Is she bothering you?" she asks, a hostile tone in her voice.

"I was looking for a book about water plants, which is right here," I say, taking out the book Potter had just put back. "It's a very good one," I add. I can see that Potter is biting his lip, trying to hold back a laugh.

Weasley looked away from me and grabs Potter's arm. "Let's go, Neville is looking for you," she smiles at him, softly tugging on his arm. He pulls back from her grip, but does follow her. Right before he is out of sight, he turns around and gives me a little wave.

I make my way back to my friends, putting the book about water plants down on the table, completely forgotten I was even holding it in the first place.

"Water plants?" Draco asks me as he reads the title.

"I told you there was a book I needed to look at," I smile sweetly.