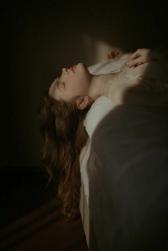 I woke up the next morning with a sleeping Draco still in my arms. His head rested on my shoulder, his arms tightly wrapped around my waist. I looked at him and let out a small sigh. He looked so peaceful right now, I didn't want to disturb him. God knows he could use the sleep. I tried to wiggle out of his arms as softly as I could, trying to make sure he stays asleep. When I successfully manage to get out of his grip, I stand up and walk to Draco's replica bathroom.

I look into the mirror and see the wound on my lip had completely dried up, but was very visible either way. The cut itself was small, but the bruising surrounding it wasn't. I would run by Madam Pomfrey later today, hopefully she would have some ointments. I splashed some cold water in my face to freshen up and combed through my hair with my fingers to make it a little less rough looking.

When I walk back into the bedroom I see Draco sitting up, looking at me with a apologetic smile on his face. I take place next to him again, going through his hair the same as I had mine, to try and make it a little less wild looking. His face was bruised as well, a lot more so then mine, but I had done a good job cleaning it last night.

"Z, I just want to apologise-"

"Draco it's fine, you kept saying sorry until you finally fell asleep last night. It was an accident, I know you would never hurt me on purpose," I say with a soft smile. And that was the truth. I knew Draco would never harm me intentionally, he never had. I knew his behaviour last night had to do with more then just getting pissed and wanting to fight for fun with Gregory and Vincent like he used too. Draco wasn't usually a violent person, a part from pushing a first year out of the way every once in a while, and he preferred to use his mouth to piss people off instead. I knew something had happened in order for him to feel like fighting would take the edge off.

"So what happened?" I ask him, taking his hand and giving it a light squeeze to let him know that whatever he is going to tell me, it's okay.

"I got a letter from father," he begins, his voice small. Usually when Draco got a letter from his parents, especially his mother, he would be beaming with joy. But the look on his face was enough to turn my stomach, this had not been a happy letter.

"You are expected to join us for the winter holiday's. You are to stay with us in order to prepare for the wedding, and for other activities related to the support of our Lord," he finishes.

I hated going home, I always dreaded it. But I knew spending the winter holiday at Malfoy manor would be so much worse, almost making me long for a winter holiday with my father. Yes, Draco was there and Lucius spoke of wedding preparations, but I doubt it will have much to do with wedding dress shopping or cake testing. I had heard Draco's stories about his past summer with Lord Voldemort, and couldn't have even begin to imagine how horrible it had been. Those six weeks had been enough to completely break my best friend, and the thought of having to spend two weeks in that place, terrified me.

"When I got the letter I felt so useless. I've been trying so hard to do things on my own, to keep you out of it, and now- now he wants you too. I try to protect you, but I keep failing, and I-" I wrap my arms around him again like I had last night, trying to calm him down.

"I know you did whatever you could, but you can't protect me from him Draco."

"But I have to do something-"

"The only thing we can do now is help each other get through it. You've been trying to keep me out of it, but he clearly has a plan, one that includes me. The more secrets we keep from each other, the harder it is going to be. So from now on, you include me, okay?"

I knew Draco would have a hard time letting me in on all he has been doing. He had been feeding me little crumbs, thinking it would keep me busy. Of course I had been working on that damn potion a lot, but I wasn't an idiot. I knew he was running around the castle doing different tasks, unrelated to killing our headmaster, I just hadn't been able to figure out what those exactly were.

Draco just nodded in defeat. He knows that I am right, but he always has been a very stubborn and proud person. He feels like he has failed to protect me, while there really was no protecting me to begin with. I know that, and I hope he will realise that too.

The moment Draco and I left the room of requirement my eyes met those of none other then Ginny Weasley with two of her girl friends. She looked Draco and me up and down, smirked and walked away.

"Fuck," I say, biting my lip. I know Draco and I must have looked like we just spend a wild night in the room of requirement together, with our regular clothes on from yesterday and our messy hairdo's.

Draco looks from Weasley walking away to me, a eyebrow raised. I didn't really know how to explain that I knew she would tell everyone she saw us coming out of the room of requirement together, and why it would bother me that that meant Potter would hear about it too. Seeing how Weasley reacts to me, he'll probably be the first she tells.

"I'm taking a wild guess and say that was something Potter related?" Draco asks me while we make our way to our common room.

"What was?" I ask him, knowing damn well what he meant.

"So the whole no secret thing only applies when it is secrets of mine?"

I stop walking, cursing again. I know he was right, I just didn't know how to explain anything regarding Potter, because I still didn't have a clue what was going on myself. I know there was something, my heart didn't start beating rapidly when I hold Draco's hand, or Blaise's. So was it just attraction? Or did I actually have feelings for him? But how can you have feelings for someone when you've only had a few decent conversations? Was that even possible?

All I knew for sure was that I highly enjoy his presence, his touch and how at ease I feel when I'm with him.

I looked up at Draco. He didn't look mad or disgusted, just curious.

"I don't know, it's confusing. I like being with him, and I think he feels the same way. But it's Potter, you know? He's nice to everyone, well apart from you," I say, ending with a small laugh.

"Not everyone looks like you, Z," Draco just says and he starts walking again. I kept still for a few extra seconds to let his words sink in before I start walking as well, a little faster so I can reach Draco again. I don't say anything, but stare at him while we walk, waiting for him to elaborate more. Draco was clearly enjoying the whole situation as a smirk started growing on his face.