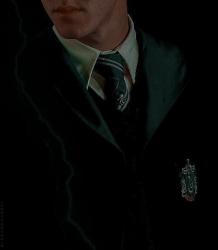 I fucking hate him.

All I could think while I was pulling Zara behind me through the dark, empty hallways of the castle, was how much I hate Potter.

My entire body was incredibly tense, and all I wanted to do was punch something. I knew my grip on Zara's hand was hard, but she hadn't said a word about it, and I couldn't bring myself to loosen up. Oh, how fucking badly I had wanted to punch Potter in that stupid face of his. But Zara would've never forgiven me if I had.

She was so fucking blind when it came to Potter. He was the cause of all of our suffering, the reason why our life's where going to complete shit. Of course she didn't see it that way. She had always thought of him as the good guy, the golden boy. She would come to a rude awaking this winter break. So for know, I'll let her play out her fucking weird, little hero fantasy. It will be over once she meets our Lord, that I am sure of.

I knew what was in store for her the moment she would set foot in the manor, and there was nothing we could do about it. I had begged father to keep Zara out of it, I would do it all. The tasks, take the mark, the training. I would gladly do it all if it had meant she wouldn't have to, and so I had been able to keep her away from it all during the summer. This time I couldn't, his mind had been made up. Part of me felt guilty for keeping the whole truth from her, but I wanted to keep her innocent for as long as I could.

We were almost in the dungeons when I heard a little sniffle behind me. I stopped walking and turned around to see Zara in the little bit of moonlight that was shinning through the windows, her cheeks tear streaked.

"I'm sorry, it's the stupid potion," she mumbles, wiping away her tears roughly with her free hand.

I fucking hated seeing her cry. Especially when I knew I was partly to blame for the tears on her face. I had made her cry a lot this year, and I hated myself for it.

I remember the first time I saw her cry so very well. We were celebrating her sixth birthday, and it was an amazing summer day. She wore this ridiculous pink dress with lots of lace and bows, and while I found it horrendous looking, it was her favourite dress and she wore it whenever she could. She had been chasing me around the backyard for making fun of her the dress, her brown eyes filled with anger, when she suddenly stopped, anger making place for pure horror. She started running in a different direction as fast as her little legs allowed her. She stopped to pick something up, her lips trembling as I know saw she held a little bird in her arms.

"We need to save it Draco," she had said as she started running back to our parents, tears coming out of her eyes. I had followed her, and while I couldn't give a damn about some random bird, the sight of Zara crying, caused me to want nothing more then that stupid bird to survive.

"Mother, father, please. What do we do?" she had cried, clutching onto the bird. Her father had taken out his wand, putting it against the little bird, a green light shooting out and the bird going completely limp.

It was also the first day I had seen someone use the killing curse.

"Now throw that repulsive thing away," he had said, looking at the death creature with disgust. Her mother had taken her away, and when they came back the bird was gone.

The rest of the day Zara hadn't spoken a word, she just stared at her hands, while her favourite dress was now stained with blood. She never wore it again.

"Draco, can I ask you something?"

"Why do you hate him so much?"

There isn't a simple answer to her question. At first I hated him because he rejected me, chose that ridiculous Weasley boy over me. I hated how everyone admired him, how he was always considered such an amazing person. And for what? Surviving the killing curse when he was a baby. It was downright preposterous. It's not like he defeated our lord himself, he hadn't done shit.

I really started hating him in our third year, because that's the year I started to notice how Zara had kept looking over at the Gryffindor table more and more, her eyes always on Potter. I remember her tight grip on my arm when the dragon had broken itself out and started following him during the Triwizard Tournament, or the little smirk on her lips whenever he spoke up against Umbridge and the worrying look in her eyes when he had walked in with his face covered in blood this year.

I had been glad that Zara had seemed completely unaware of her feelings for years now, that was until that fucking back to school party. The second I had seen them together I knew there was no going back now.

Yet what I hated most about him, is that if he wanted to, he could take Zara away from me.

"It's because I am jealous," I then yell, all the reasons going through my mind, not being able to hold it in anymore.

She looked at me with a frown at first, her mind trying to make sense of my answer, when a sudden look of realisation kicked in and she let go of my hand, taking a step back from me.

She was blinking rapidly, avoiding eye contact, clearly in complete and utter disbelief.

"No, god no. Not like that. I'm not in love with you," I add quickly. I know my choice of words had been poor, but what can I say. I've never been good at expressing how I feel.

Of course I love Zara. I love her more than life itself. But not romantically, purely in a platonic way. And even though I am not blind, and can see that she is absolutely beautiful, I never saw her as hot or sexy, as I so often heard other guys describe her. To me she was just my best friend, and the thought of having to produce an heir with her after our marriage, made me sick to my stomach.

"Oh my god, you almost gave me a heart attack," she yells, slapping my arm repeatedly.

She stops, a grin on her face.

After a few moments of silence between us, I sigh. I know I have to tell her more, I just don't know the right words.

"I meant that I am jealous of how he always gets everything he wants, even you."

"Draco, I need you to know that whatever happens, you will never lose me. I will never leave your side," she says while putting her hand on my face, softly stroking my cheek with her thumb. And while she seemed to fully believe the words that are coming out of her mouth, I don't. I don't believe them at all.

"I'm sorry you have to marry me," I whisper. She bites her lip, avoiding eye contact again.

"It's not your fault. We both knew that it was a possibility. I must admit that I always expected to be send away to marry a Durmstrang boy though," she mumbles.

I swallow. There was something I hadn't told her. Something I have kept a secret for years now.

"I was supposed to marry someone else."

I had never told anyone, only me, my parents, and the parents of the girl knew. She was supposed to hear it by the time she turned eighteen. So while Zara might always have wondered who she would end up with, I always knew. Well, until it all changed this summer. This fucking summer changed everything.

To say I was surprised was an understatement. I was confused as to why he had never told me this before, and even more so why he won't tell me who it was now.

"Because it doesn't matter anymore. You and I are getting married."

I furrowed my brows. There was more to it. If it didn't matter anymore, why would he care if I knew her name? Why did he keep it a secret in the first place?

"I think it does matter, or you would've told me."

"Z, drop it. It isn't important anymore. We're getting married now, so whoever I was supposed to marry, it's over. My feelings don't matter."

And there it was. He whispered the last part so quietly, I almost missed it. As if he hadn't meant to even add it. But I did hear it, and it only added to my confusion.

I knew many girls where interested in Draco, but he never seemed interested in any of them. I hadn't understand why, but it made sense to me know. He was a traditional man, and if he knew who he was going to marry, I wouldn't put it past him to safe himself for that person.

"You have feelings for her?" I ask him. He closed his eyes, swallowing again. He didn't even have to answer me, because I already knew. I wanted nothing more then for Draco to have love, and I feel terrible for never having realised he actually did love someone.

"Can we please never speak of this again? She doesn't know, and now she never will."

"Just because we are engaged, doesn't mean you can't be with her. You know I want you to be happy."

"It doesn't matter because she's in love with someone else, okay? So fucking drop it," he yelled.

"Oh my god! There you are!" I suddenly hear Pansy's voice.

Draco and I both turn around to see our friends walking towards us.

"Pansy what happened to your face?" I ask her when they are standing in front of us, noticing her bloody nose. Theodore and Blaise both start grinning.

"I kicked that Weasley girl's ass," she says proudly.

"We overheard her and her friends talking about spiking your drink," Blaise answers.

"We tried to stop her, but this crazy girl went completely feral," Theodore adds laughing and motioning to Pansy.

"You should've seen Weasley," she smirks.

I wrap my arms around her.

"She was pretty badass, it's a shame you guys weren't there to see it," Theodore says as I let go of Pansy, looking at her with pure adoration.

While Blaise and Theodore start to recreate the fight, I couldn't help but notice how Draco hadn't spoken a word since our friends showed up. I looked at him out of the corner of my eyes. He was leaning against the stone wall, and while the sight of Blaise and Theodore acting like idiots usually made him laugh, he didn't seemed amused one bit. And while he was standing in the dark, I could see the worried expression on his face as he was starring at Pansy.

And that's when it all clicked.

The person he had feelings for, the one who was in love with someone else, the one he couldn't tell me about, it was Pansy Parkinson.