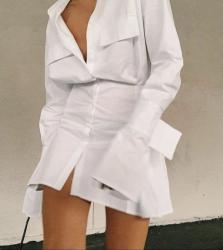 The next morning I couldn't stop starring at Pansy, who was sitting across from me, between Draco and Theodore.

"Are you sure you don't want to get your nose fixed?" Theodore asked her.

"Hell no, I'm wearing this with pride. May it send a message to anyone who tries to fuck with my friends," she replied, sending a wink my way.

"You are my hero," I let her know with a big smile.

"I'll treat you real nice," Pansy says in her seductive voice, standing up and leaning forward so she is closer to me, a grin forming on my lips.

"What about me?" Theodore asks, pulling Pansy back.

"Maybe if you grow some balls and asks me out on a real date I would treat you real nice as well."

"Well, go out with me then," he suddenly says, surprising us all. Pansy doesn't reply, instead she just stares at him, blinking rapidly with her eyes. If this would've happened yesterday, I would be filled with joy, however knowing what I think I know, I let my eyes drift of the Draco. He just looked at his plate, acting as if he didn't ever hear what Theodore had said. To me, this just proved my theory, because if he didn't have feelings for Pansy he would be just as shocked as the rest of us that after years of flirting and only making out when they are drunk, Theodore finally made a real move.

"Okay, we'll go out," Pansy giggled, once she comprehended that he really was asking her out.

I was happy that Pansy finally got to go on a date with the one she had been pining after for years now, yet felt incredibly sad that that meant that Draco would now have to deal with seeing the one he loves in a relationship all the time.

"I'm going back to bed, I could use some more sleep," Draco mumbles, standing up and walking away. I wanted to go after him at first, but decided against it. Draco clearly didn't want to talk about it, and I had to respect that.

"He is different this year," Blaise says with an expression I could only describe as real concern.

"Should we be worried about him?" Pansy asks me, making Theodore and Blaise turning to me as well.

I swallow, knowing I can't tell them the full truth. But if even they noticed something had been going on with him, saying everything was okay wouldn't be convincing at all.

"He's just got some things to deal with at home, but he rather keeps it to himself," I tell them, staying as vague as possible. They seemed content with my answer, as they just kind of nodded and went back to eating their breakfast.

Daphne and Tracey had joined us a little later, and apparently news of the fight between Pansy and Ginny had traveled fast because they had heard the news from some Hufflepuff's in our year on their way to the great hall.

While Pansy was re-telling her story to the girls, I took my chance and looked over at the Gryffindor table, only to find a certain green eyed boy already looking at me. I felt the corners of my mouth turn upwards instantly while I started replying last night in my head again. If Draco hadn't interrupted us, who knows what might've happened. Potter motioned to the archway of the great hall before standing up and leaving, looking around one more time at me as he turned the corner.

"I'm going to try to get some more sleep as well, see you all at lunch," I say, quickly getting up and walking out myself, my body tingling with excitement. As I turn the corner I start walking slowly, trying to find Potter. I feel someone grabbing my sleeve, as I am pulled behind a large statue.

"Potter-" I shriek before he puts his hand on my mouth to silence me.

"I really wish you would just call me Harry," he says with a fond look in his eyes as he pulls aways his hand.

I wasn't sure why I still called him Potter, I suppose it was just what I was used to. It was what everyone in my circle of friends called him, and while I wouldn't mind calling him by his first name, I had to make sure I didn't do so in the company of my friends.

"I guess I can call you Harry," I whisper, my cheeks feeling warm. I am not sure why, but saying his first name suddenly feels intimate to me, as if it was a cute nickname.

"I might still slip up and call you Potter though," I chuckle, making him laugh as well. I look at him, he was wearing his regular clothes again. A pair of dark jeans with a dark grey hoodie, however he had done his hair in the same style as yesterday. He looked good.

"As hot as you looked last night, I do really like you in hoodies," I tell him, grabbing the little strings of his hoodie, playing with them.

"I would gladly offer for you to wear one of them. As amazing as you always look, aren't you freezing?"

I looked down to my short, white dress and shrugged, continuing fumbling with the strings. I was a little cold, but I was saving up my tights for when it got real cold.

"I'm used to it by now. Mother would kill me if she would see me walking around the castle in a hoodie."

"She used to be a fashion designer, right?"

I look up at him, surprised that he knew that. My mother hadn't been designing clothes for years now, way before he would have found out that he was a wizard.

When I was little I would often spend time in her atelier, admiring all of het sketches and the huge piles of fabrics she had laying around. She was very passionate when it came to fashion and always made sure I looked as stylish as possible. At the time I didn't understand why she quit, but now that I am older I knew it had been because of my father. He hated that she had a career, because in his eyes a good wife was the kind that stayed at home and took care of her husbands needs only. Now all she did was staying indoors, only allowed to be with friends when she accompanied my father. She was slowly rotting away in that hell hole I had to call home.

"Yes, she was," I say with a sad smile, dropping the strings of his hoodie.

"I didn't mean to upset you," Harry says, noticing my reaction.

"I don't like talking about my family to be honest, but you couldn't know that. There's a lot you don't know about them, about me."

"I want to know everything about you, good and bad."

I bite my lip, feeling a mixture of relief and guilt. I wanted to tell him everything, be completely open with him. But I never could be a hundred percent truthful. I had to protect Draco and his mission. As much as I wanted to be honest with Harry, Draco's secrets came first. Protecting him will always be my first priority.

"I've heard about Ginny," he says after a few moments of silence, changing the subject. "I can't believe she would do something like that, It's not like her. She's been acting really strange this year, and I am so sorry she did that to you," he follows.

"Well, girls can get a little crazy when it comes to love," I chuckle.

"She's trying to make you jealous. Have you really not realised this?"

He furrowed his brows and shook his head, looking deep in thought, trying to make sense of what I had just said.

"Just to get it straight, because apparently you aren't very observant when it comes to girls feelings, you do realise I have feelings for you as well right?" I ask him, my eyebrows raised.

His eyes meet mine right away.

"I really didn't mind it though, at all," he says, a smirk forming on his lips. I opened my mouth, wanting to give him a sassy answer in return, but nothing came out. As much as I liked the cute, shy Harry, I really, really liked this version of him as well. I put both of my hands in neck, pulling him a little closer to me.

"So if I would try to kiss you again, you wouldn't be opposed to that idea?" I whisper, my eyes resting on his lips.

"No, not at all. I would highly encourage it actually," he whispers back.

I slowly lean in, and when he closes his eyes, I let go of him and take a step back. He opens his eyes once he realises I wasn't going to kiss him, a blank look on his face.

"Good to know," I say, my turn to smirk before I turn around and walk away from him.