Chapter Two: Something Else 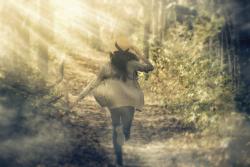 Chapter Two: Something Else

I was wondering through the dark forests of Germany when I heard a faint cracking sound coming from behind me. It scared me, but I was not about to let anyone know I was scared. Not yet, at least. I started to walk further into the forest, making sure I walked at the same pace as I did before the sound came from behind me. keep calm and keep quiet is what I kept telling myself. I felt my heart racing in my chest, but I couldnt afford to let my chaser know what I felt inside. I encouraged myself to keep going, I really needed to push myself forward as fast and silent as I could. And so I walked straight forward, hoping that someone might come to my rescue or find me before I would be attacked by whomever was chasing me.

It didnt take long before a faint light appeared in front of me. I let out a sigh of relief and started to let out a small smile. The cracking stopped immediately when the light became known to him, which startled me at first. But I couldnt stop now. I had to walk toward the light and get help. I needed to get back to the town before something bad would happen. So I ran the last bit toward the light, which became a little house on the top of a hill. I knocked on the door and heard a voice calling out for me to wait just a sec.. And cut I heard the director say and I turned around smiling. Great job, Shea! And thats a wrap for today, guys said the director as he came walking toward me. You must be very tired now he smiled at me. Yeah, I am. Dont get me wrong, I liked it. But running up and down for three hours is extremely tiring I laughed at him. Yeah, I know. But we wanted to make it as real as possible he explained. Yeah, thats when you get the best films I said smiling at him. Youre very right about that, little missy. Now, get some rest and Ill see you early tomorrow he said and patted my shoulder. Thanks, Greg I said sighing. I think Ill go and get a nice warm shower Thats a very good idea he smiled and walked away. I decided to follow his example and walked toward my rented car and drove to my hotel.

Can I help you with anything, Miss Miller? asked a shy young girl, who was standing behind the check-in desk. Well, actually Do you have this massage-room? I asked her. Yes, we do. Do you want me to book you an appointment? the girl asked. I would love it, if you did I smiled with relief. No problem, Miss. Do you want it to be in your suite? Or do you want to come downstairs to the Spa yourself? she asked. Whatever is the fastest option I smiled. Well, you could go to the Spa now. Someone cancelled her appointment she grinned at me. Has anyone ever told you that you are extremely good at your job? I asked her. No, but thank you very much, Miss she smiled humbly. You deserve it! Ill just get a bikini and my pyjamas and than Ill go to the Spa immediately. Will that be alright?, No problem, Ill notify the Spa of your arrival she nodded. Thank you so much! If there is anything I can do for you, please ask I said to her and ran up the stairs to get my stuff.

This morning I came to Germany for the recordings of my new film; A Day Without Saying Goodbye. It was a romantic horror film about a girl who got abducted and escapes. She than gets to this house where a writer lives with whom she later falls in love with. It wasnt exactly what I would normally do, but Dean had already accepted to do this film and had asked me to join him. Dean is one of the best actors of this era and had become a very good friend of mine, even though he is American; And that was simply because of my experience with a few American actors, like Jaymee. And another plus on this film was that the director was Greg Dames. He was the director of most realistic films ever. You know that, if you are working with him, he tries to get the most realistic film moments ever. And that means that you might have to walk in the forests in Germany for three hours, just to get the right amount of fear and intensity he wants, and if he asks, youll do it no matter what. That and the fact that I love to make realistic films. It shows that you really can act, in spite of some daytime dramas Its something I found out during these last five years. I found my passion for acting again and I found out I love doing these sort of films most. But I must admit that doing the superhero films every two years are also really fun to do. It is not often you find yourself playing a comic book character and get an award for it.

After my amazing massage, I assign myself to bed for the night thinking about Nathan. I know that the whole tour-thing shouldnt surprise me, but it does. When we first met, I was hidden in his closet after a concert I should be the first to admit he needs to go on tour, because Im also a his biggest fan. But it still surprises me when he tells me he needs to go on tour, again. It makes me feel lonely and proud at the same time. It means that the band still has a lot of fans who want to see those guys perform live, but it also means I have to let him go for a few months. And that is very hard for me, but I do it anyway. I do it because I love Nathan and he loves performing for thousands of fans. That is something that I know very well. And so after a few moments of sadness, I replace my tears for a bright smile that encourages him to go on tour and entertain those fans all over the world. I step back and let the love of his fans take over my job, just for a few months. And when he comes back home, Ill be there to give him my love again. And luckily for me, I get his love in return. It is something that has worked for us ever since we got together as a couple. Weve learned that sometimes its better to step back and let other people take over. We learned that the hard way

I closed my eyes and remembered how Nathan smiled at me the moment before he boarded. It was a face that made me feel loved and also made me sleep like a little girl who lie in her sweet fathers arms as if she was the most gorgeous princess in the world.