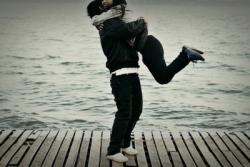 I went to the restaurant of my hotel to meet up with Nathan. So I had picked my most favourite dress out of my suitcase and did my make-up in a special way. I was extremely excited to see Nathan again tonight, because I hadnt seen him for over a month! I ran, trying really hard not to fall because of my high heels, toward the door and exit of the hotel. Miss Miller? a man in a very nice suit asked. Yes? I asked and smiled at the man. Youre taxi is ready for you. You can just walk toward the parking lot and he will be right there for you he said. Thank you! I said to him and exited the building.

As promised, the taxi was waiting for me in the parking lot and the driver brought me to the restaurant within no time. I got out of the taxi and couldnt help but having this gigantic smile on my face and I hated it! At the same time, it couldnt really bother me because I had a very good reason for smiling like an idiot. Nathan was close, very close. I walked into the restaurant and took one last breath to calm myself down. I was so excited to see him; I almost had forgotten how to breathe. I slowly walked further into the restaurant and I spotted him almost immediately. I walked up to him and when I was nearly sitting at the table, he looked up and jumped from his chair. Shea! Ive missed you so much! You look beautiful! he nearly screamed. I smiled and gave him a big hug. And I missed you too, and youre not too shabby looking yourself, Mister! I winked and gave him a kiss on his lips. Gosh, how I missed kissing his soft lips. Ugh, its so cold to finally hold you in my arms. Ive waited a whole month, thats way too long he smiled and kissed me. This time it was a much more intense kiss than before and I enjoyed every second of it. But we had to settle for a few seconds since we were still at a fancy restaurant.

He pulled my chair a bit back for me to sit and pushed it forward, like a real gentleman. Thank you I smiled and couldnt stop staring at him. Whats up with the staring? he chuckled. I just cant believe youre really here, thats all I grinned. Thats okay, I get what youre feeling he winked. But I am really here now, in Germany he said. I nodded and looked up at his beautiful eyes. Yes, you are I said and took his left hand that was lying on the table. At that time the waiter came to our table and asked us what we preferred and of course, we answered. You know the drill.

After two hours of catching up and looking like a teenage couple, we decided we had eaten enough and sat enough. We stood up, paid for our dinner and walked out of the restaurant. I want to walk around town for a bit Nathan said and took my hand. I wont object, I promise I laughed and followed my boyfriend into the beautiful streets of Berlin.

Why the sudden concert in Berlin? I asked him, whilst we were walking toward a big park. Ha! They asked us to come to Berlin and we had to do a concert anyway, so we put two and two together and here we are he said. So, this has nothing to do with me? I asked a little disappointed. He stopped walking and turned me around so that I had to look at him. Do you really think that we came to Berlin for one concert alone? he asked and looked intensely into my eyes. Well I tried but stopped when I saw that his look was serious. We came here because of that reason and the fact that I couldnt stand to be apart from you any longer. I was driving the boys nuts over not being able to see you and they saw the perfect opportunity when they heard of this gig. When they told me their plan I was so excited I wanted to jump on the next plane to Germany, which of course wasnt possible because of a tv-performance. But yeah, thats the main reason we came. And I am really glad I came he smiled and put his hands around my face. So glad he smiled. Wow, thats so sweet and awesome Nathan! I love you and I love the boys for doing this. I missed your amazing eyes and your great voice. I still cant believe youre here I said and felt an overwhelming wave of warmth running through my body. This man had so much love for me that I thought mine would never be enough. How on earth would I be able to tell him or even show him how much I love him? I was pretty sure I needed to come up with a monster plan for that, but for now, I just needed to enjoy the moment of having him here with me. I love you, Nathan. I really do I said and caressed his hands that were still surrounding my face. I love you, too he said softly and brushed my lips with his.

Shea? he asked after a while. Yeah? I asked him and looked to the side. We were now standing in front of the Brandenburger Tor . Weve been through a lot together, havent we? he asked. I stopped him and looked at him. Yeah, we have been through a lot together. But I wouldnt want to change having met you for it I said and gave him a hug, but I didnt let go of him after. Instead I laid my head into his collarbone and looked up at him. Good, because I wouldnt have it any other way either he said and smiled down on me. There was something different about the way he smiled, though. I just couldnt figure out what it was. Shea, this last month gave me a lot to think about. About us and about the future he said. I lifted my head from his collarbone to look at him. What do you mean, Nath? I asked him puzzled. Well, I figured out that I would never want to let you go. Certainly not after what Amanda did to you, and us. And since Im pretty sure youre my one and only true love he smiled at me like he was the proudest and happiest man in the world. Shea Miller he stated and pushed me back a little. Would you please grant me the honor he said and knelt down on the ground. To be my wife? he asked and all I could do was stand there and look down at the man I loved for so long. He took a small box out of his jacket and opened it, so that I could see what was in it. I could feel tears welling up in my eyes and an amazingly great smile took over my face. That little ring It meant the world to me at that point. And all I could say, were the three little words every woman would say to the man theyd loved for so long: Yes.
Kudo Volgende hoofdstuk